WOW… This past season brought us a 12-2 record, a Pac-12 Championship and a Rose Bowl ring. Two years into his tenure, coach Mario Cristobal has a 21-7 record and two outstanding recruiting classes. One could say he’s developing Oregon into “U$C North.” But with football still eight months away and expectations sky high for next season, let’s ask the question all our minds: What does the future hold for the Ducks?

A crystal ball, as we know from antiquity, is an orbuculum, or sphere, used for fortune telling. Scrying is the process of seeing the future and/or various images therein, often called clairvoyance. If one only knew how the stock market would perform or how future games would play out (especially since sports betting is legal), we would all be exceedingly rich and famous. Even more than our beloved Uncle Phil!

If, for example, we knew that the Ducks would be in the College Football Playoff next January, would we not be getting tickets and accommodations in advance? We could wager boatloads of cash early on to pay for the entire trip and probably buy a Caribbean Island to boot!

What would you do with apperception? Pondering this concept in your heart and mind is truly fun!

A Look Inside the “Cristo-Ball” Is Tyler Shough at starting QB in the Ducks future?

So if you could gaze into the crystal ball for next football season, what would you want to see? What is needed for this upcoming Ducks team to reach the ultimate pinnacle of success — a CFP berth?

The most obvious need is a QB to follow in the footsteps of the departing Justin Herbert. The front-runner to replace him is redshirt freshman Tyler Shough, whom teammates have already been praising for his leadership and athleticism. However, he could get competition from freshman Cale Millen and incoming 4-star recruit Jay Butterfield.

Reloading the O-line is certainly another necessity, along with recruiting new studs to step in and fill out a vastly improved and “angry” defense.

From this writer ‘s limited gaze, though, a glaring inadequacy on offense is apparent: We have no deep threat!

Yep, for all the recruiting largesse under Cristobal, which is quite impressive, the Ducks do NOT have a speedster on the outside, aka Samie Parker of old. We cannot to get behind defenses and burn them for big gains. This hurts us on the field in multiple ways.

In the current offense, opposing safeties can crowd the line of scrimmage and don’t have to respect the deep ball, which further loads the box on running plays. We saw this numerous times last season. 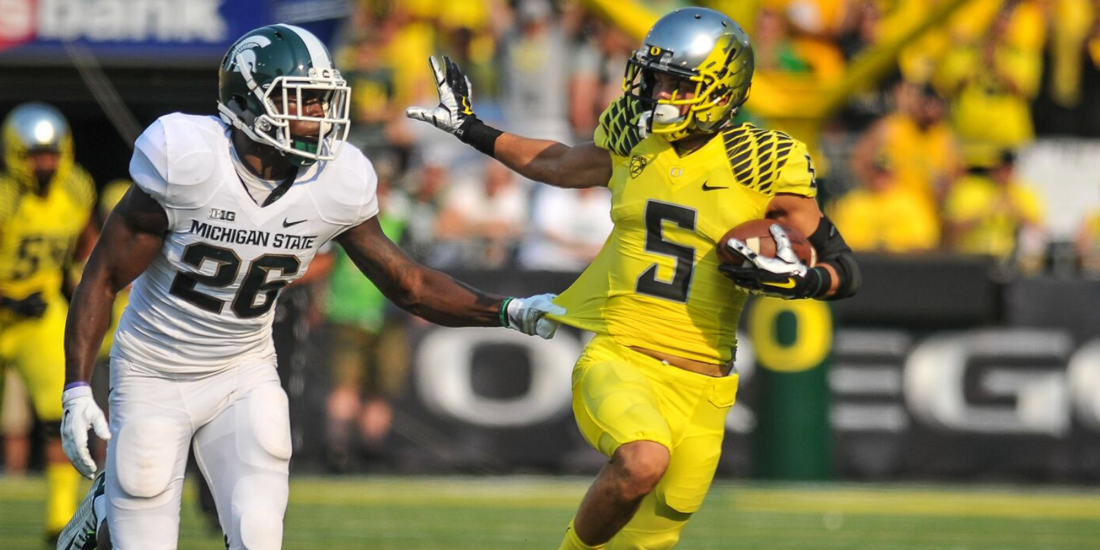 When you have a deep threat who can stretch the secondary, it opens up underneath routes, giving receivers more room to maneuver and operate without congestion over the middle. Too often, the box was loaded on short yardage plays in 2019, and it will continue to be that way until the Ducks demonstrate they can hit the deep ball.

A home run hitter also allows our QB to develop skill throwing deep routes through repetition and building trust in his receivers (sadly lacking this past season). Not once in 2019 did we beat teams deep without blown coverages, hitch and go’s or the pump fake and release with stutter step routes. Blistering speed we simply did not have!

On the other side, our defensive secondary was repeatedly burned deep by speed on the outside, and it cost us a berth in the CFP. When you practice against speed, you are better able to defend it. And unfortunately for Oregon, you cannot develop speed — it is innate.

So heading into 2020, who will be our deep threat? A JC pick-up before spring ball, a latent, undiscovered talent lying dormant, ready to be unleashed? The Ducks have the “need for speed.” As we peer into that sphere of the future, is a receiver with sublime rapid wheels already here or even near? Let’s hope that our head coach (who lived and died in trench warfare) recognizes what’s lacking on the outside.

The Positives: Clairvoyance is not needed to see the upside this 2020 Ducks team will have. They are a burgeoning power on the Left Coast that can flat out recruit under Cristobal. They play with far fewer penalties and better discipline than in the past, and perhaps most importantly, they posses a bond and caring for each other that has been tempered by the adversity of past seasons. Some of us never thought it possible, but the Ducks have reached that elite group of programs that are reloading (aka no more rebuilding) for each new season. Can Joe Moorhead turn the Ducks into an offensive juggernaut?

The Obvious Negatives and Unknowns: Coming off a 12-2 season, the Ducks have a huge target on their back, and everyone will be gunning for them. Resentment for the Ducks’ brand and the program’s affluence is increasing throughout the conference. Winning certainly does that.

The biggest unknown going into next season is our new OC Joe Moorhead. Will he shape our offense into a juggernaut, similar to that of his Penn State offenses in 2016-17 (which ranked 11th in scoring efficiency)? Will he continue the ground-and-pound offense that Cristobal seems to favor or run a more B1G/SEC hybrid offense? Moorhead’s reputation could even influence a speedster to join the Ducks via transfer portal. If he has as much of an impact on the offense as Andy Avalos has had on the “D,” then (as the great Keith Jackson would say) “Whoa Nelly.”

As we peer into that crystal ball, what do you see in 2020? What else is needed to boost Oregon to elite status? Will we be scrying a glorious future or crying for what is lacking? That is the fun journey of Ducks Football in the next decade!