Vernon Adams arrived in Eugene in the fall of 2015 amidst a great amount of intrigue.

The Oregon Ducks were coming off a national championship game but were tasked with replacing QB Marcus Mariota, who was drafted #2 by the Tennessee Titans. In the summer of 2015, rumors started to swirl that a dynamic FCS quarterback was leaving the red turf of Eastern Washington University to live out a dream to playing college football at the highest level.

“Big Game VA” ended up breathing some life into a program that, in retrospect, would have been on a respirator without him. While a retrospective look at VA’s transfer may not warrant a remake of the 1946 Christmas classic starring James Stewart, it is nonetheless interesting to ask “what if Vernon Adams never came to Oregon?” 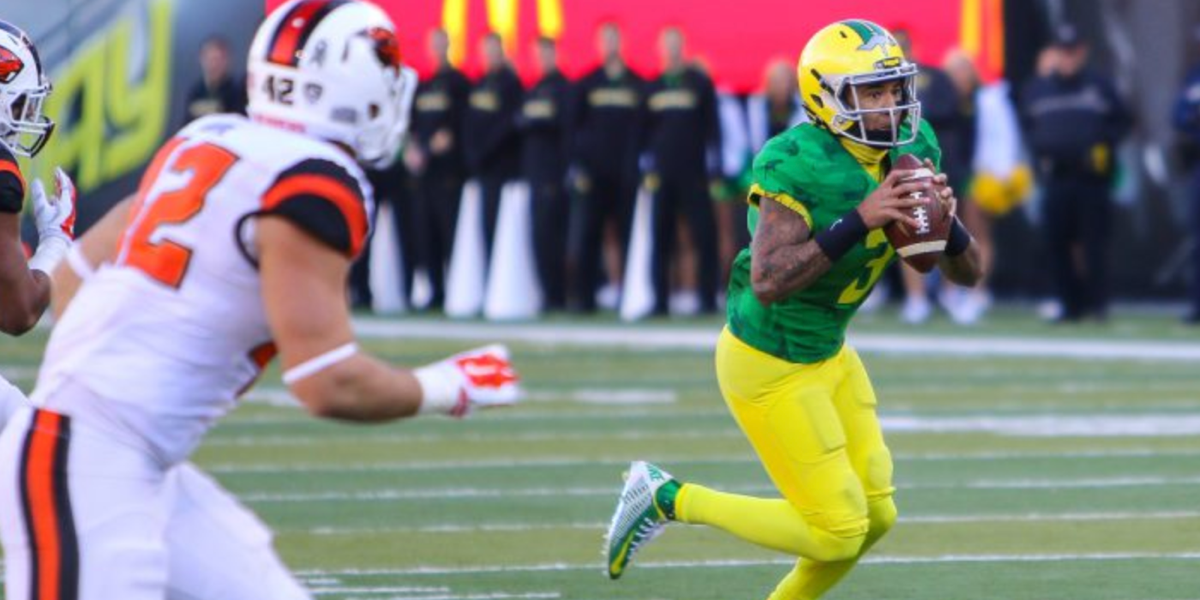 Adams was a one hit wonder for the Ducks

The quarterbook room, on the other hand? Jeff Lockie (r Jr), Taylor Alie (r So), Morgan Mahalak (r Fr), and Travis Jonsen (Fr).  Lockie was the presumed starter until Adams’s transfer and represented the Ducks’ best hope, absent the Adams transfer or a switch to a full-time wildcat offense.

Adams’s unique skills carried the Ducks to several close wins, including a 26-20 win at Washington and a 38-36 win at Stanford. With Lockie behind center, Oregon loses those games and probably also drops games to Arizona State, USC, and possibly even Oregon State. Even a 4-8 record following a national championship appearance would have been one of the biggest one-year program collapses in recent memory. 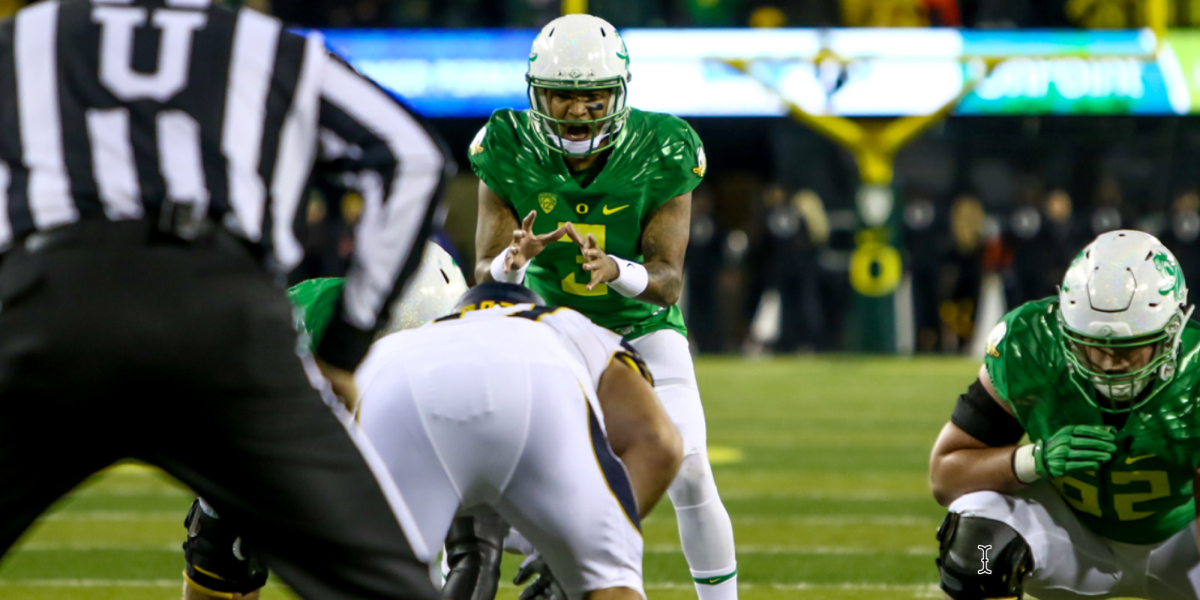 A healthy Vernon Adams behind center made a huge difference.

No Adams = No Taggart = No Cristobal

It’s difficult to imagine Mark Helfrich getting fired only a year removed from the Ducks’ national championship game in 2014, but would he have lasted another full season following a 4-8 finish in 2015?

Gene Chizik barely made it two full seasons after leading Auburn to a national championship in 2010 and going 8-5 in 2011 and 3-6 in 2012. Helfrich was ultimately dismissed at the end of 2016 when the Ducks finished 4-8, but without Adams, Helfrich is likely released in the midst of back-to-back 4-8 seasons and never makes it to the end of 2016. Willie Taggart, not yet having posted his 10-2 season at USF, is likely off the Ducks’ coaching radar at this point. And without Taggart, Mario Cristobal never comes to Oregon as an assistant and is never promoted to head coach prior to the 2017 Las Vegas Bowl following Taggart’s departure to Florida State. 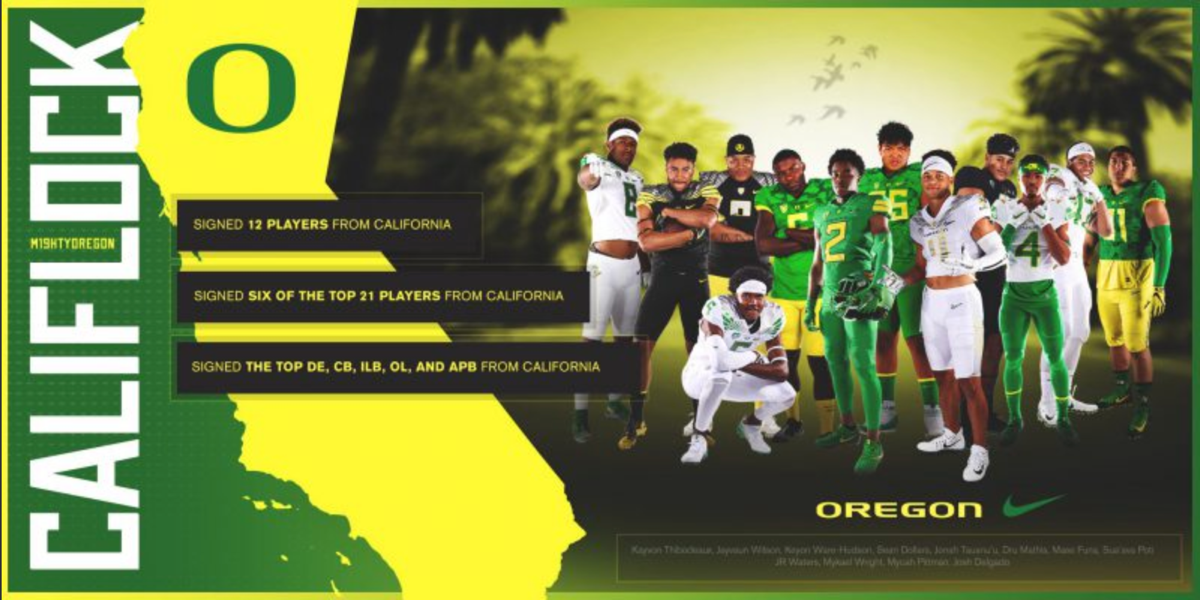 Without Vernon Adams transferring to Oregon, there is no Alamo Bowl appearance in 2015. TCU’s historic, triple-overtime win over Oregon never happens. We don’t have to endure Lockie passing for 36 yards on 13 attempts, or watch TCU storm back for a 47-41 triple-overtime win in the biggest comeback in bowl history.

But we also don’t get Cristobal, the #CaliFlock, or the renewed hope of returning to an elite level.

In 2009, we Ducks fans were giddy to be among the college football elite, ending the season competing with Ohio State in the Rose Bowl. The Ducks followed up with appearances in the 2010 BCS National Championship, the 2011 Fiesta Bowl, the 2012 Rose Bowl, and the 2014 Rose Bowl and CFP National Championship Game. Sure, the Ducks regressed to the Alamo, Redbox, and Vegas Bowls in 2015, 2017 and 2018, respectively. But here we are coming off a Rose Bowl win in 2019, and heading into 2020 with another elite recruiting class and College Football Playoff hopes that are starting to feel legitimate.

And for that, we owe Big Game VA a great big “thank you.”