Oregon fans are undoubtedly on cloud nine after the Ducks’ exhilarating, down-to-the-wire victory against Wisconsin in an instant Rose Bowl classic. After the potential program-changing victory, the arrow is definitely pointing up in Eugene.

But as the dust settles and we look back at the season as a whole, it’s apparent that Oregon kept a pretty big weapon under its sleeve until its final two games of the season. To say that Justin Herbert’s legs were underutilized for most of the season would be an understatement. He entered the Pac-12 Championship game with just a single rushing yard to his name.

But the coaching staff knew that it had to unleash Herbert’s underrated athleticism at some point. In the Championship game, he caught Utah’s defense by surprise, actually pulling the ball on couple of read options. Then, he took things up a notch against Wisconsin, with his legs accounting for all of Oregon’s offensive scores.

Clearly, the star quarterback had the tools to punish defenses on the ground all year long. Did the coaching staff’s decision to save the quarterback run game until the end of the season help or hurt the Ducks, though?

The Missing Piece to an Underwhelming Offense

Oregon’s offense was statistically solid in 2019, despite some middling performances. But when push came to shove, and Oregon needed big scoring outputs from its offense, the results were mixed.

At times, like against Washington and Washington State, the Ducks’ offense did enough to get the job done when its defense had trouble picking up the slack. Everything worked according to plan in these games, with Oregon’s road-grading offensive line clearing big holes in the running game, and offensive coordinator Marcus Arroyo’s patented screen game working to perfection. Oregon’s offense stepped up against Washington.

But other times, like against Auburn, Arizona State and even Oregon State in the regular season finale, things didn’t go so smoothly. In these games, the offense struggled for a variety of reasons, whether it was failing to establish a rushing attack against Auburn or struggling to find consistency in the air against Arizona State (until it was too late).

Of course, every unit goes through difficulties as the season unfolds. But Oregon had a trump card in its back pocket that Mario Cristobal refused to use until the Ducks’ playoff hopes were shot — a trump card that could have kick started an often-sleepwalking offense. Even just a couple instances of Herbert pulling the ball on a read option, or even on a called quarterback run (as the Ducks ran against Wisconsin), might have been enough to open things up offensively. Instead, the coaching staff was content to hamstring the offense by eliminating an entire portion of its playbook for most of the season. A Quarterback Running Threat Is a Necessity

It’s no longer simply an added benefit to have a quarterback who threatens defenses on the ground and in the air. It’s a necessity, especially against elite opponents. Would Oregon have beaten Wisconsin without Herbert’s willingness to actually pull the ball and punish the Badgers for over-committing to the running back on zone reads? Considering Herbert’s legs accounted for all but seven of Oregon’s 28 points, it’s hard to say that a more conservative gameplan would have gotten the job done.

But if that’s not convincing enough, look no further than the quarterbacks of each of the playoff participants. Obviously, Oklahoma’s Jalen Hurts is one of the most dangerous runners in the country at any position. But even supposed “pocket passers” like LSU’s Joe Burrow and Clemson’s Trevor Lawrence have had to resort to their legs in crunch time. Both players have rushed for more than 300 yards this season, with both of their season-highs in carries coming in critical matchups against Alabama and Ohio State, respectively. 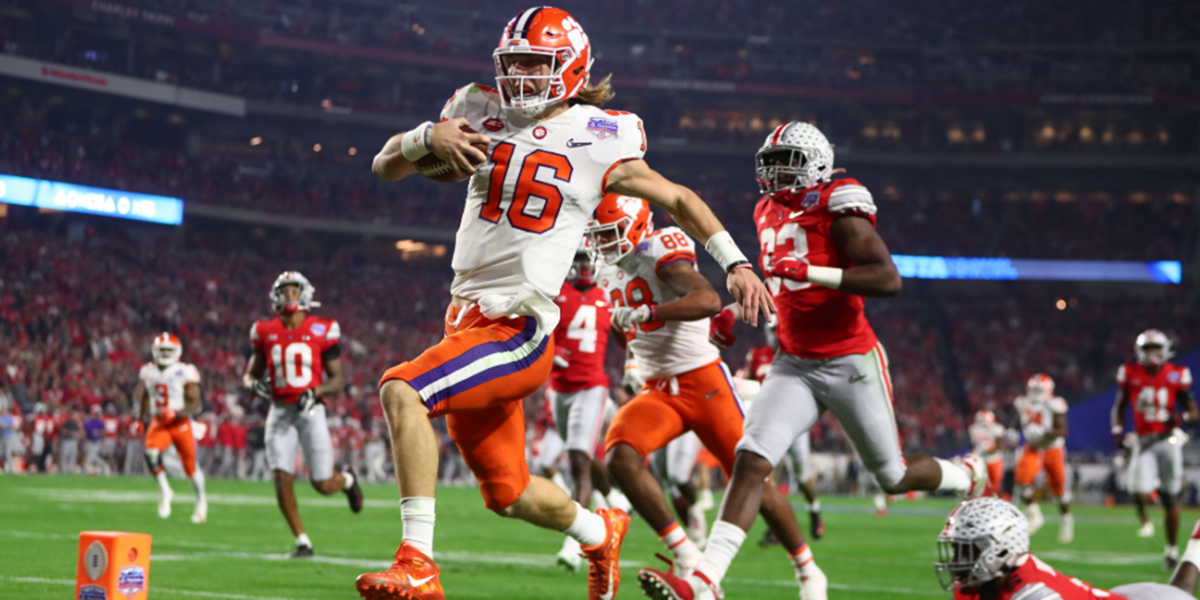 Without Clemson calling quarterback draws against an aggressive Ohio State defense, or LSU letting Burrow keep the ball on a zone read against Alabama, neither team would be playing in the National Championship Game. Contrarily, against Clemson, Buckeye quarterback Justin Fields’ injury essentially rendered him useless outside of the pocket, and it made Ohio State’s offense far easier to defend.

Oregon fans are scarred from Herbert’s broken collarbone in 2017, and understandably so. Cristobal vowed to take better care of his quarterback when he became head coach, and that was effectively the end of the quarterback running game at Oregon.

But hopefully Cristobal has had a change of heart.

In back-to-back outings, Herbert’s running completely changed the complexion of the game, and against Wisconsin, it gave Cristobal and the Ducks a Rose Bowl victory. Maybe it’s time to live on the edge a little in 2020 and keep defenses on their heels all season, not just for a game or two.