What a season it was for our mighty Oregon Ducks. The Ducks went 10-2 in the regular season and then continued their dream season with wins in the Pac-12 championship and Rose Bowl.

The success of the 2019 Oregon Duck football team relied not only on talent, but on the players’ genuine desire to play for one another. The 2020 Oregon Duck Football team will retain much of its talent; however, they are losing a senior class full of leaders and young men that helped turn around the Oregon football program.

The Ducks’ spring game is four months away, and the regular season is nine months away. A lot can change from now until the time the Ducks open their season against North Dakota State, but for now, here are my way-to-early predictions for the 2020 Oregon Ducks football season.

Not a Huge Drop-off at QB

For the first time in almost four years, the starting quarterback for the Ducks will not be wearing No. 10. That is, of course, due to Justin Herbert graduating and heading to the NFL. Although next year’s starting quarterback will likely not be named for months, redshirt freshman Tyler Shough is the heavy favorite to land the job. Shough goes 8-of-9 versus Nevada.

Shough has already had two years to learn Oregon’s system and has been able to play behind, and learn from, Herbert. Pair his experience with a potential improvement at the vacant offensive coordinator spot, and Oregon may have a quarterback who can put up similar stats to Herbert.

The position group that will be most affected by graduating seniors is Oregon’s offensive line. Although all-world talent Penei Sewell is returning, the other four starters on the line, as well as a key reserve in Brady Aiello, will be graduating, and no one else on the current roster has yet to play more than a handful of games. The offensive line will have to rely heavily on Sewell to carry the left side, hope that incoming recruits can make an instant impact and hope current players make major improvements. Losing Shane Lemieux, Jake Hanson, Dallas Warmack and Calvin Throckmorton will undoubtedly sting, but Cristobal himself is a former offensive lineman and offensive line coach. He knows better than anyone how to motivate and prepare his guys.

It seemed that freshman sensation Kayvon Thibodeaux improved in every single game this past season.

Thibodeaux started as a backup, moved into the rotation and, by the end of the season, was the most dominant player on the defensive line. If Thibodeaux continues to improve and live up to his five-star potential, he will be a force to be reckoned with next season. He will continue to draw double teams and leave room for the rest of Oregon’s talented front seven to make plays. 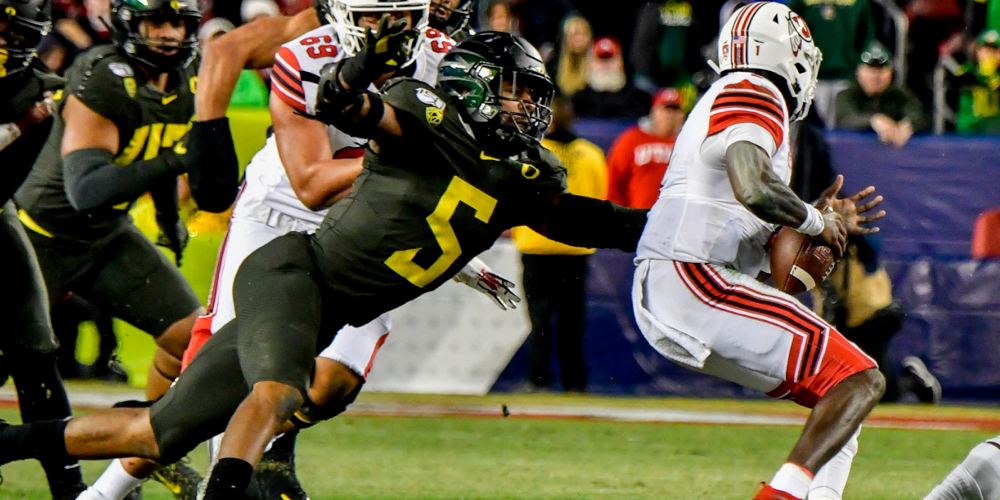 The Ducks are already preparing to lose Troy Dye, and other juniors may leave for the NFL draft, as well. Thibodeaux will likely become opposing offenses’ main focus and the Ducks’ most tantalizing player on defense. I expect him to be in the running for Pac -12 Defensive Player of the Year when the 2020 season is said and done.

Although the Ducks are losing a great deal of both talent and leadership, they should be the favorites to win the Pac- 12 conference yet again. With a different quarterback and offensive coordinator, and a retooled offensive line, the Ducks have many questions to answer on the offensive side of the ball. However, whatever certainty the offense lacks, the defense will make up for. An already young core with Thibodeaux as a centerpiece has multiple five-star recruits joining the unit in 2020.

I believe the Ducks will finish the regular season 9-3 with another appearance in the Pac-12 Championship and potentially even another Rose Bowl berth. The Ducks have Stanford, USC and Washington all at home and do not even face Utah in the regular season. Both Stanford and Washington are going through program transitions and USC just recently came off their worst bowl loss in years. They also currently have the lowest-ranked recruiting class in the Pac- 12.

Unfortunately for Oregon, they do host a Justin Fields-led Ohio State team in early September, and this young Ducks team may not be ready for such a challenging task that early in the season.