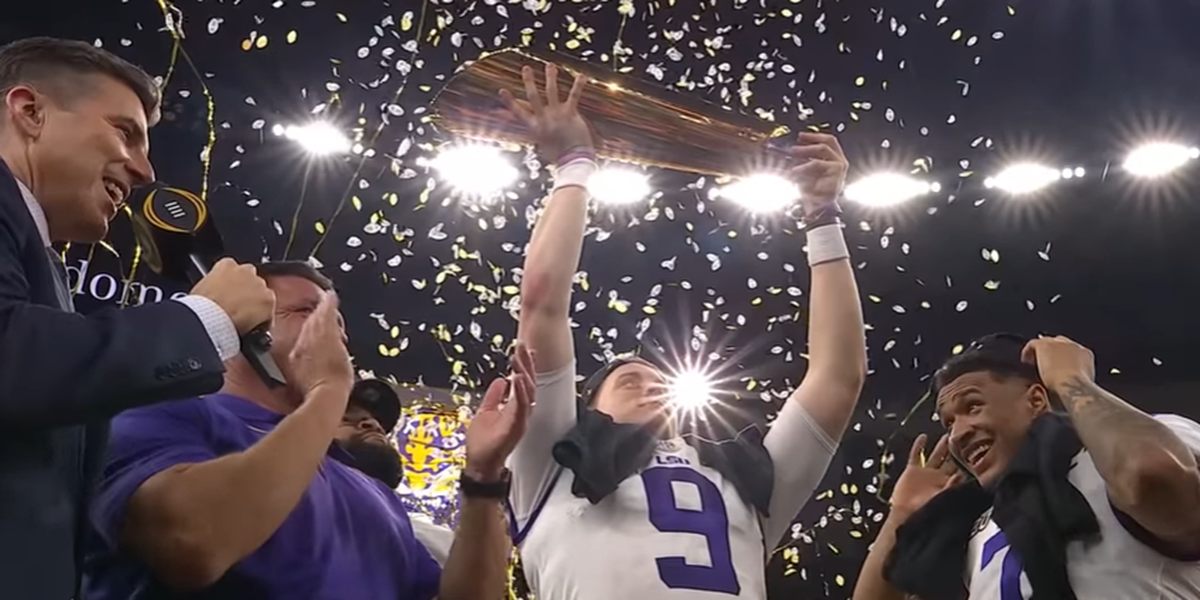 College Football National Champions take many different forms. Plenty of recent title winners have been led by high-flying, record-setting offensive attacks. On the flip side, defense-minded, hard-nosed teams have also had their day in the sun. With teams reaching the top in a variety of ways, what useful information can a program gather from each of these apparently different championship runs to win a title of its own?

To answer that question, let’s take a look at the stat sheet. Surface-level statistics don’t always tell the full story, but they’re a good place to start when looking for meaningful similarities between National Champions. By documenting statistical trends among modern-day title winners, a program (and its fans) can know which metrics should prioritized in its pursuit of a championship.

For the purposes of this article, data was compiled for every National Champion from Alabama in 2009 to LSU in 2019*. All data is courtesy of cfbstats.com. The following are my conclusions, following thorough study of the data, regarding which metrics, statistics and areas of the game are the most important in winning a title. (*2009 is the first year that cfbstats.com began compiling statistics.)

Top-level quarterback play is the most consistent link among recent National Champions, and it’s the only data point that 100% of the teams in this study had in common. This shouldn’t come as a surprise; everyone from old-school football purists to modern-day analytics gurus generally agree that the quarterback is by far the most important and influential player in the game. Having a great quarterback doesn’t guarantee a team a championship, but it gives it a shot.

In recent years, we’ve seen some incredible and memorable quarterback-driven National Championship runs that show just how essential elite quarterback play is. Obviously Joe Burrow’s 2019 season comes to mind, as it was arguably the most impressive. He accounted for an FBS-record 65 total touchdowns to just six interceptions, while also setting the passing efficiency rating record. Even the best defenses in the country, including the Nick Saban-led Tide and Brent Venables-led Tigers, looked shockingly ordinary against Burrow and the potent LSU offense. 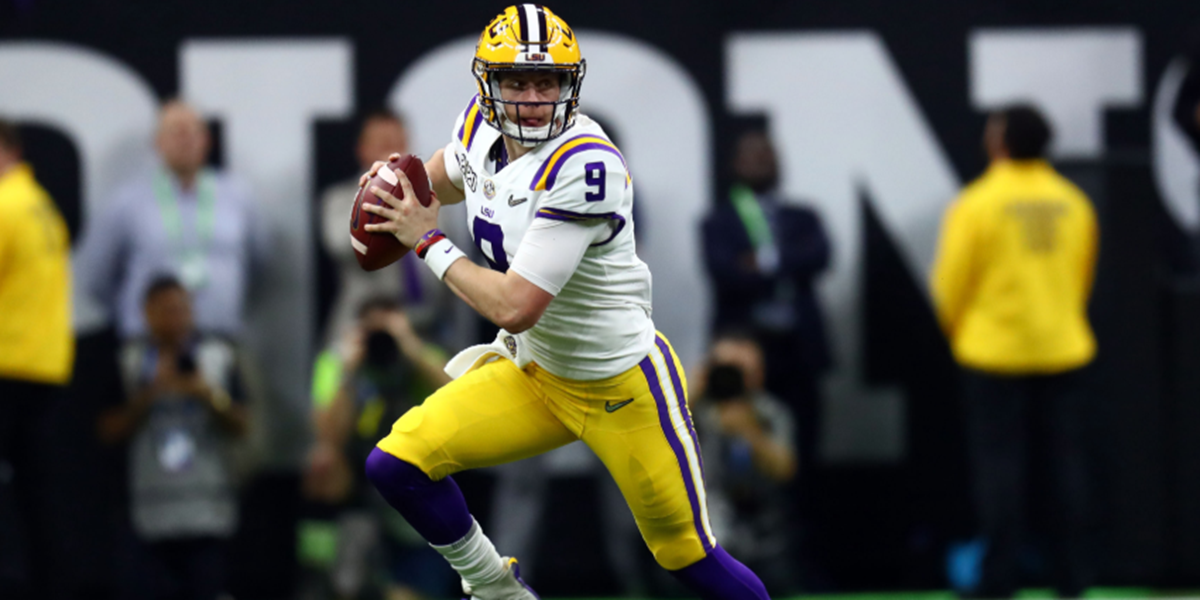 And who could forget Cam Newton’s spectacular run to the title, in which he accounted for 50 total touchdowns and over 4,000 yards at a time when quarterbacks in the SEC (not named Tim Tebow) simply didn’t put up numbers like that. Newton’s 2010 season proved that a one-man wrecking crew can actually win a championship, so long as that transcendent talent is playing quarterback.

Joining Newton and Burrow as quarterbacks who played at an elite level in championship-winning seasons are AJ McCarron (in 2012), Jameis Winston, JT Barrett, Cardale Jones, Deshaun Watson, Jalen Hurts, Tua Tagovailoa and Trevor Lawrence. Most of these names should speak for themselves, but the stats back up their reputations as elite signal callers. Each of these quarterbacks had passing efficiency ratings over 150 in the seasons they won a title (a number that would rank in the top 25 in 2019), and each (either individually or as a duo in the case of the 2014 Buckeyes and the 2017 Crimson Tide) accounted for at least 30 touchdowns.

Now, a couple of quarterbacks were right on the edge of this “top-level” qualification; Greg McElroy on Alabama in 2009, McCarron on Alabama in 2011 and Jake Coker on Alabama in 2015 didn’t have spectacular seasons. However, each quarterback ranked in, or just outside of, the top 25 in passing efficiency rating, and each fielded an impressively efficient touchdown-to-interception ratio.

Not every title-winning quarterback since 2009 has had elite volume, but every title-winning quarterback since 2009 has played at an elite level, or at the very least, a highly efficient one. The “outliers” in the pack didn’t have to produce historic numbers because they each had a ridiculously dominant defense they could rely on. Some may suggest that this means that having an elite defense is more important than top-level quarterback play, but the statistics don’t paint that picture. 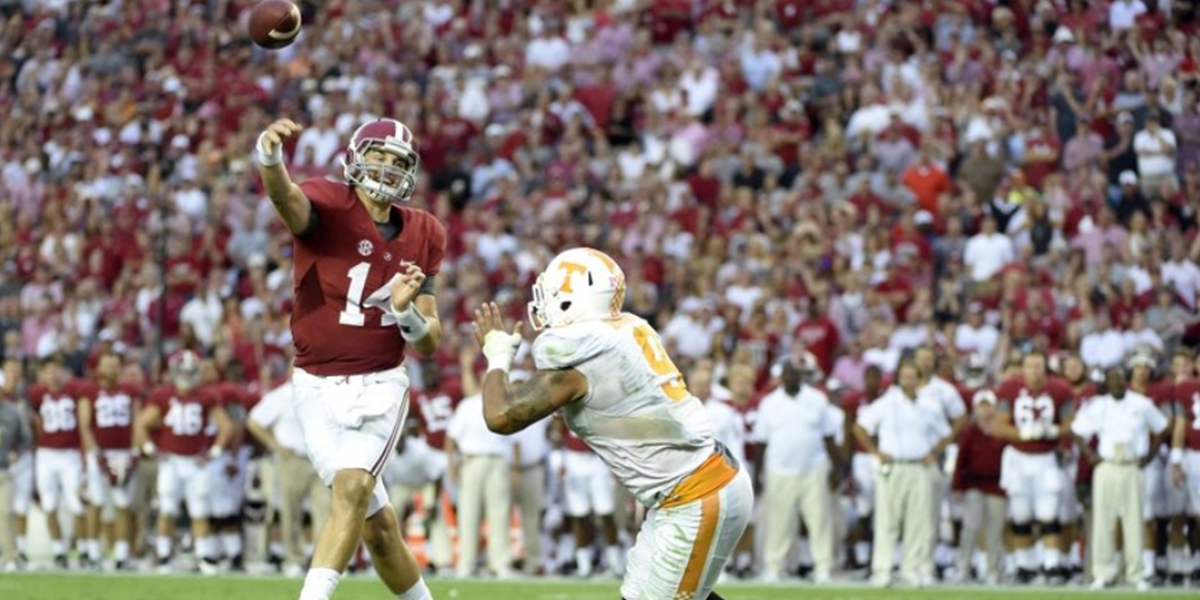 Jake Coker wasn’t spectacular, but he was efficient in 2015.

Essentially, if a team has a defense that is absolutely suffocating, then it can get away with simply having an efficient, mistake-free quarterback (which means it still needs  an above-average quarterback, statistically). However, all other teams — even those that have really good, top-10 defenses — must have an elite quarterback in order to win a championship.

2. A Great Defense Over a Great Offense

In the age-old debate of whether a great defense or a great offense is more important, the truth lies somewhere in the middle. Most teams that win a championship are pretty good on both sides of the ball. But if a side has to be picked, at least based on the past 11 National Champions, it’s a surer bet to center a team around a dominant defense.

All but two of the last 11 National Champions had a top-25 total defense, and eight of them had top-10 units. Of course, most of these staggering defensive numbers are courtesy of the poster child for defensive football: Alabama. In each of the Tide’s five championship-winning seasons since 2009, it ranked in the top three in total and scoring defense, leading the country in both statistics in 2011, 2012 and 2017. The 2013 Florida State Seminoles and the Clemson Tigers in 2016 and 2018 followed the same blueprint. The Seminoles, although remembered for their offense, actually had the top-ranked scoring defense in 2013, led by an elite secondary (which featured current NFL superstar Jalen Ramsey) and an athletic linebacking core. Perhaps less surprisingly, Clemson had a top-10 scoring and total defense in both of its title-winning seasons. Despite having plenty of offensive firepower on both of its National Championship teams, Venables’ defense was just as integral to Clemson’s success.

On the other side of the fence, only six of the last 11 National Champions ranked in the top-25 in total offense. There’s no clear-cut explanation as to why defense-minded teams have won more championships recently, but here’s an interesting theory to consider. Two of the teams in the study — Alabama and Clemson — won multiple championships over a period of 11 years, and both are defense-led or at the very least balanced.

Meanwhile, the truly offense-driven National Champions in this study (2010 Auburn, 2014 Ohio State and 2019 LSU) each only won one title, and although Ohio State is a consistent championship contender today, it has significantly improved its defense since 2014. So, using this baseline data, it’s fair to surmise that it’s easier to maintain defensive proficiency over a period of time than it is offensive proficiency, thus it’s better to shape a program with a defensive emphasis. Auburn is still looking for a Cam Newton replacement.

Yes, the quarterback is the ultimate equalizer, but it’s a way less sustainable long-term strategy to center a team around an offense, which needs consistently elite play from a singular position to be successful, than it is to build a dominant defense and develop quarterbacks who don’t have to be elite, but merely efficient and mistake-free, as previously discussed. Although it’s no piece of cake to replicate the success of defensive juggernauts like the Alabama teams of the 2010s, such a defensive focus is the more proven method to winning championships in the long run.

There are more important metrics to prioritize than total offense, but the importance of a good scoring offense shouldn’t be overlooked.

No matter how good a team’s defense is, in modern-day college football, at some point, the offense will have to carry the load, whether that’s for a drive, a quarter or even an entire game. That has been the case for every title winner since 2009, as all but one of them have ranked in the top-25 in scoring offense. That one outlier, the 2015 Crimson Tide, narrowly missed, ranking at No. 30.

What’s fascinating is that only half of these top-25 scoring offenses ranked inside the top 10. What that suggests is that it’s important to score a baseline number of points, but after that, everything else is just icing on the cake. Jameis Winston led his Seminoles to the No. 2 scoring offense in 2013.

To quantify what a top-25 scoring offense looks like today, it’s roughly 35 points per game. Of course, with most of these National Champions possessing elite defenses, they didn’t actually have to score 35 points in most of their games to win. But scoring at least that much on average shows that a team has the offensive capability to score and produce at a relatively high rate in the case that its defense doesn’t bring its A-game.

4. Efficiency and Winning the Turnover Battle There’s certainly more that’s needed to win championships than the criteria above. Perhaps more importantly, far more detailed and accurate conclusions can be made with a closer look at data points beyond these surface-level statistics. This won’t be the last discussion of the “championship blueprint” here at FishDuck.com, but these four areas of emphasis are the first, most glaring observations that stuck out to this writer.

Given your own theories, what do you make of these conclusions? Are these four data points the most important, or are there other factors that I missed that help to form the title-winning formula?