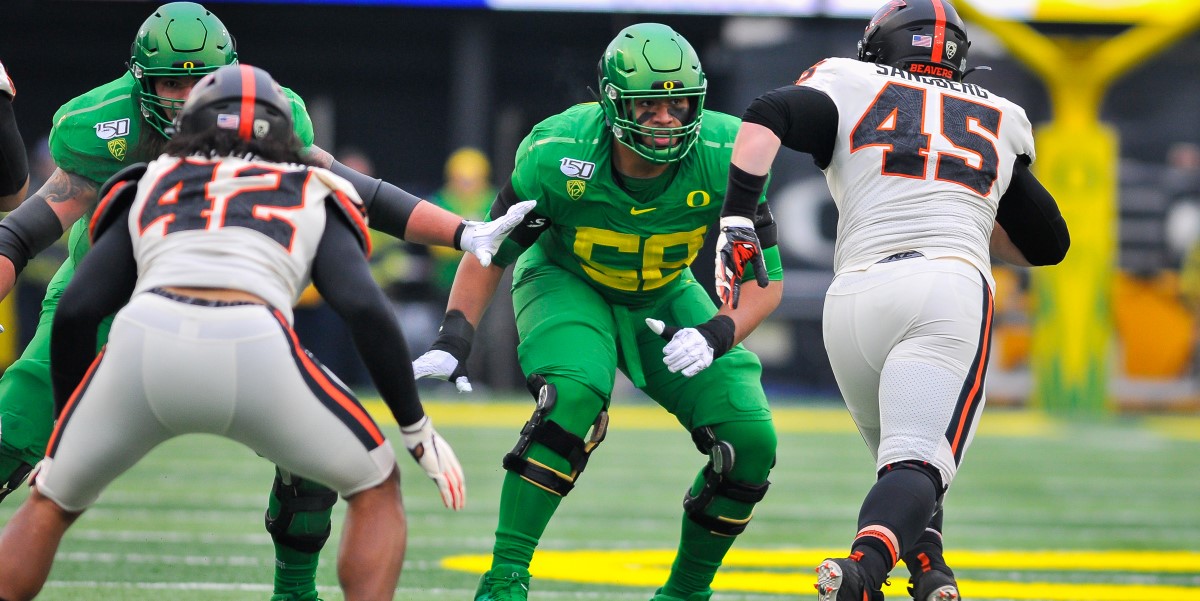 Imagine being a linebacker tasked with making a split-second choice between taking on Outland Trophy winner Penei Sewell as a pulling tackle or trying to cover a speedy receiver like Mycah Pittman or Jaylon Redd out of the slot. The RPO (Run, Pass, Option) is an offensive scheme that mixes together different run and pass options based on defensive alignment and reactions in order to impose no-win choices on targeted defenders. In this analysis we examine two RPO play schemes that Ducks’ Offensive Coordinator Joe Moorhead will likely utilize to create such no-win dilemmas for opposing defenses in 2020.

The above play (Power Dart Read) is a simple concept where four linemen base-block while the back-side tackle pulls across the formation as a lead blocker. Unlike the power play, which utilizes a pulling guard, the Power Dart Read utilizes a pulling tackle to isolate a lineman or linebacker.  The Power Dart Read includes a pass option in the form of a bubble route (blue) that could be thrown to Pittman or Redd if not accounted for by the defensive alignment. If the bubble route is accounted for, the QB can keep the ball if the LB (red arrow) commits inside to the running back.

If the receiver is accounted for and the LB sits in containment, as in the above video, the QB gives to the running back. Note how the QB option freezes the end, allowing the pulling tackle to get around and seal the edge, while also freezing the LB, who is left chasing the RB (Saquon Barkley) in vain.

The video above illustrates how Moorhead can utilize progressions out of the same alignment to pick a defense apart. First, Moorhead implements a formation with three receivers and an H-Back, forcing the slower linebacker/safety to defend the pass and the defensive backs to play man coverage. Second, he has the offensive tackle pull, forcing the defenders to play the run. Third, he uses the option of a QB keeper to freeze the defensive end.

As a result of the alignment and multiple threats, the defense is left with only five players to stop the run. After progressing through several successful runs in the video above, the passing element (blue) comes into play. In the final play, the safety sets his eyes on the backfield, leaving the slot receiver uncovered on a skinny post down the seam.

The Power Dart Read and Power Dart RPO utilize dynamic running backs, a run-capable quarterback, and a mobile tackle. Moorhead may not have a single back with the talent of Saquon Barkley, but he has a stable of experienced and dynamic backs, a commitment to running the QB 10-15 times per game, and the best tackle in college football.

Look for the Power Dart Read and Power Dart RPO to become staples in the Ducks’ RPO diet in 2020.

Phil Anderson, the FishDuck.com volunteer editor for this article, is a trial lawyer in Bend Oregon.