Coach: “Son, this is your 5th year in the program.”

Coach: “Give you five? What, as a once 5-star recruit, have you given me or this team? I can’t figure out whether you are lacking in intelligence or you’re simply apathetic.”

Student Athlete: “Coach, I don’t know and I don’t care.”

In other words, sports fans, as we Ducks denizens have witnessed before, not every 5-star recruit will ascend beyond this firmament.

But when it comes to winning a college football (CFB) championship, 90% of the way to winning comes on CFB signing days. If you cannot attract the best high school football players to matriculate to your school … well, Coach, you are sadly out of luck.

I believe the following speaks for itself. Bud Elliott, currently on the staff of 247 Sports where he is the No. 1 recruiting guru, a few years back came up with his Blue Chip Ratio. Mr. Elliott’s Blue Chip Ratio has determined that, since 2002 or the beginning of the “modern” recruiting era, no team has won a title unless at least 50% of their roster consists of 4- and 5-star recruits. This simply reflects what most of us who have followed CFB for years well know: it’s all about the Jimmies and the Joes. Is it any surprise that the schools with the best talent win titles? The Ducks need top-rated recruits like Justin Flowe to compete for Nattys.

A Duck feather in the cap for Oregon is that, since the BCS came along decades ago, Oregon is the only “recruiting outlier” to have played for both a BCS title and a Playoff Championship without meeting the 50% benchmark. And as anyone with a computer that isn’t GIGO (garbage in, garbage out) programmed knows, the Ducks should have had another Natty shot in 2001. Would they have defeated an extremely talented Miami team in the Rose Bowl? Doubtful. But the Joey Harrington– and Mike Bellotti-led Ducks would have, unlike Nebraska, at least showed up and balled out. The Cornhuskers were never in the game.

Auburn in the BCS title game? A heart-breaking loss against a team the Ducks should have at least taken into OT. A team QB’d by a guy who went on to be an NFL MVP. Ohio State in the inaugural College Football Playoff title game? 17 of the 22 Ohio State players who started in the game went on to be NFL draft picks. Many of these guys are still playing in The League, including Zeke Elliott and “Bosa the Elder.”

A unique system on offense can get you to the doorstep of a championship, but more often than not, talent will win out. Recruiting the better athlete will pay dividends.

Nevertheless, properly identifying the lower-rated kids will also pay dividends. When Clemson under Dabo Swinney was building, the early Tigers Playoff teams had an amazing “hit rate” on lower-rated recruits. Close to 90% of Dabo’s pre-championship 3-star recruits, who first lost to Alabama in the title game in 2015 before beating the Tide the following year, started for the Tigers and were named 1st or 2nd team All-ACC. Yet, the roster of Clemson’s first championship team still met the threshold of Mr. Elliott’s Blue Chip Ratio.

Schedule Soft Out of Conference? Next, unless you are invited to the College Football Playoff, well, it is difficult to win a title. Can I get a “DUH“? How much does scheduling matter, though? This is a far more difficult issue to get one’s arms around.

The last team from the Pac-12 to make the Playoff, Washington, played mince and meat out of conference (OOC) that season. UW’s B1G OOC win? At Rutgers. However, when the Ducks tripped to the Rose Bowl for THE first Playoff game, a win against a then-solid Michigan State team helped them overcome a single conference loss.

And how about last season’s title winner, LSU? The Tigers’ schedule was as tough as it gets, including a win over Texas (last seen manhandling Utah in San Antonio) and wins over Alabama, Auburn and Florida before the destruction of Oklahoma and Clemson. But circling back to recruiting, LSU had 14 guys taken in the 2020 NFL draft. And if LSU had played Texas Tech and not Texas OOC, would Clemson have won the title game?

For the most part, the Playoff Committee has evidenced that what it cares about when it comes to the Playoff is Ws and Ls. Yes, you can get seeding props — LSU, not Ohio State, seeded No. 1 last season for playing the more difficult schedule. But had Utah gone 12-1 in 2019, the Utes, and not 12-1 Oklahoma, would have played LSU in the Peach Bowl. Utah’s big 2019 OOC game? A BYU team that lost to Toledo and Hawaii. A 12-1 Oregon? Also likely in over the Sooners, even with a loss to the SEC’s 5th or 6th best team, Auburn. 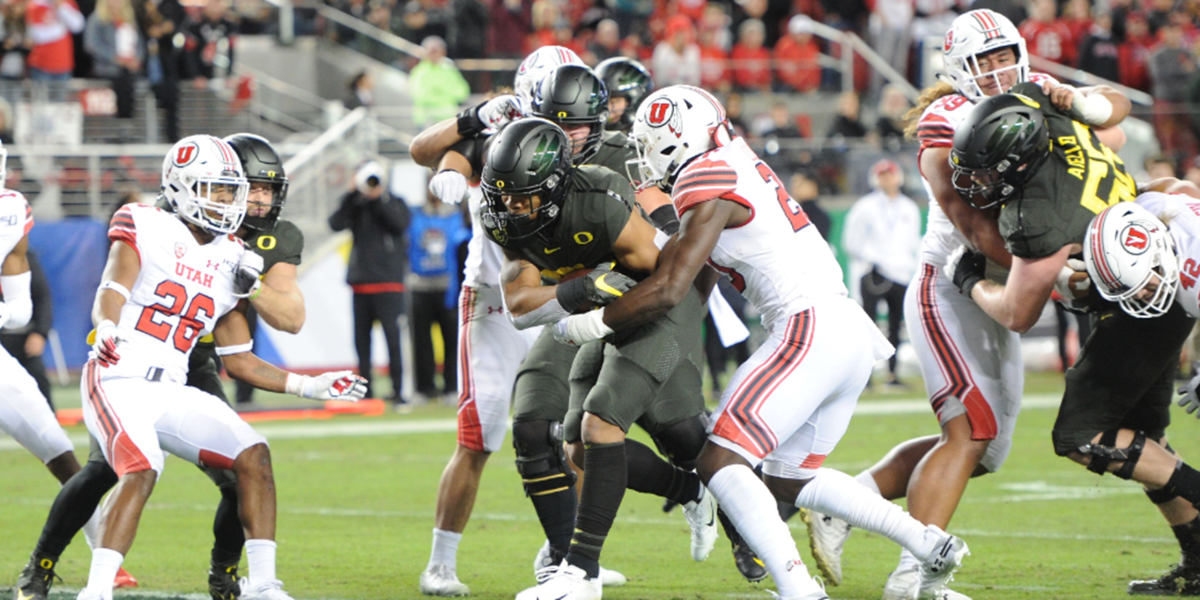 You can step it up when it comes to OOC scheduling. But if you lose, you have to win every other game on the schedule. Thus, I am more sanguine about the Ducks’ Playoff chances in 2023 when the big time OOC opponent is Texas Tech (not Auburn, Ohio State or Georgia). And make no mistake, today’s recruits want to know if you can get them to the Playoff and then into the NFL. A Playoff slot equals a two-week minimum ESPN cartel recruiting infomercial.

Now, let’s get to in-game coaching. Where the “rubber” (your recruits) meets the road. Since Nick Saban‘s first season in Tuscaloosa, Alabama has not lost a game to an un-ranked opponent, and that is an amazing stat. You not only have bring in the Jimmies and the Joes, you have to coach them up. You have to get them ready to play against themselves and not to the level of the competition. You have to wipe out the Vandys of the conference. In other words, you cannot lose to a mediocre ASU and play close games against the Oregon States and Washington States of the world.

Has the perfect trifecta of recruiting, scheduling and coaching arrived in Eugene in 2020? I, unlike good friend Mike West, doubt it. But I do see a championship shot on the horizon.