Oregon experimented with graduate transfer quarterbacks in both 2015 and 2016 and—needless to say—both years left a bit of a sour taste in Oregon fans’ mouths. Was Oregon truly unable to recruit and develop a quarterback and forced to dip into the graduate-transfer pool to find a signal-caller? Twice!

Now, in 2020, Oregon, with a completely different coaching staff, is continuing the experiment with incoming transfer Anthony Brown from Boston College. Are graduate transfer quarterbacks the one-year saviors of a desperate program or do they hurt the program by stealing the starting spot from a player recruited and developed by Oregon’s own coaches? 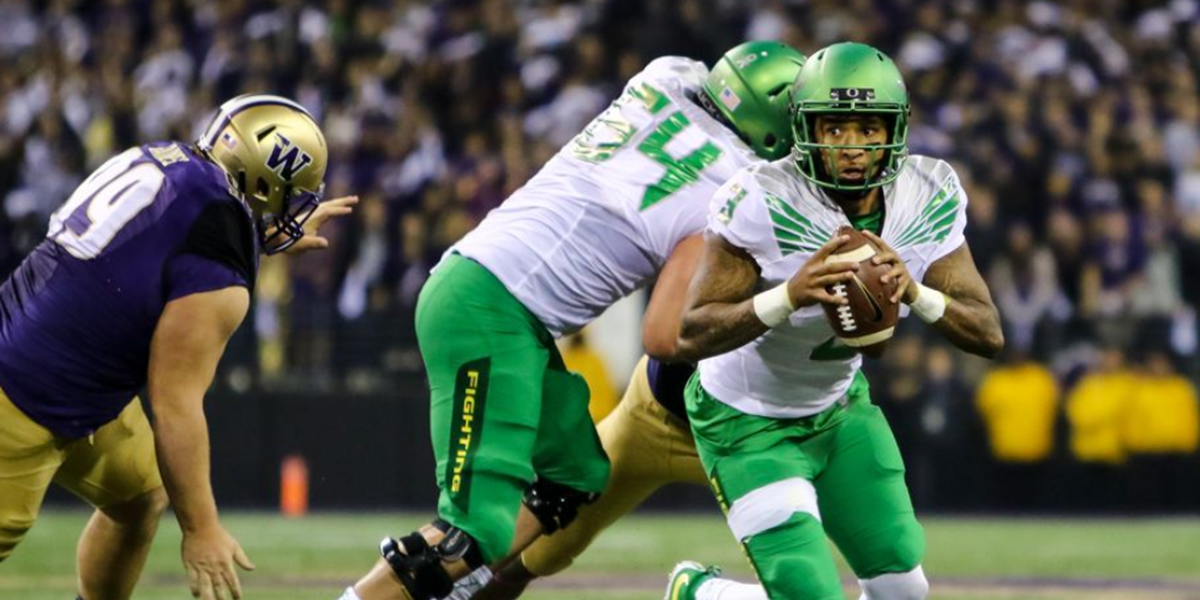 Vernon Adams was the savior of the 2015 season

The 2015 season was marked by an electric Vernon Adams who, when healthy, destroyed opposing defenses and put on a nail-biting show of deep throws while on the run. Oregon proved to be the best team in the conference when Adams was at 100%, defeating the eventual conference champ, Stanford, on the road. In doing so they kept Stanford out of the College Football Playoff, and probably robbed Christian McCaffrey of the Heisman Trophy at the same time. It was a gloriously fun moment for Oregon football, though one soured by a season with too many injuries and too many losses.

The following year Oregon brought in another transfer quarterback, Dakota Prukop, from Montana State. Prukop was in all honesty serviceable. He just wasn’t the smooth play-maker that Marcus Mariota was or the jaw-dropping magic act Vernon Adams was when not nagged by injury.

Prukop was good enough but a freshman Justin Herbert—brought in to face the Huskies after Prukop’s 2-3 start to the season—was better. Overall, the 2016 Oregon offense wasn’t as good as previous years, ranking at No. 27 nationally. For comparison, the 2014 Mariota-led offense was ranked No. 4 and the Adams-led 2015 offense was ranked No. 5.

While the 2016 offense wasn’t as good as its immediate predecessors, what killed Oregon’s 2016 season wasn’t the graduate transfer quarterback or even a merely ok offense but a defense that was the worst in Oregon history. The defense simply could not get off the field without giving up points in the process. The offense rarely got the ball in decent field position and was always playing scoreboard catch-up. 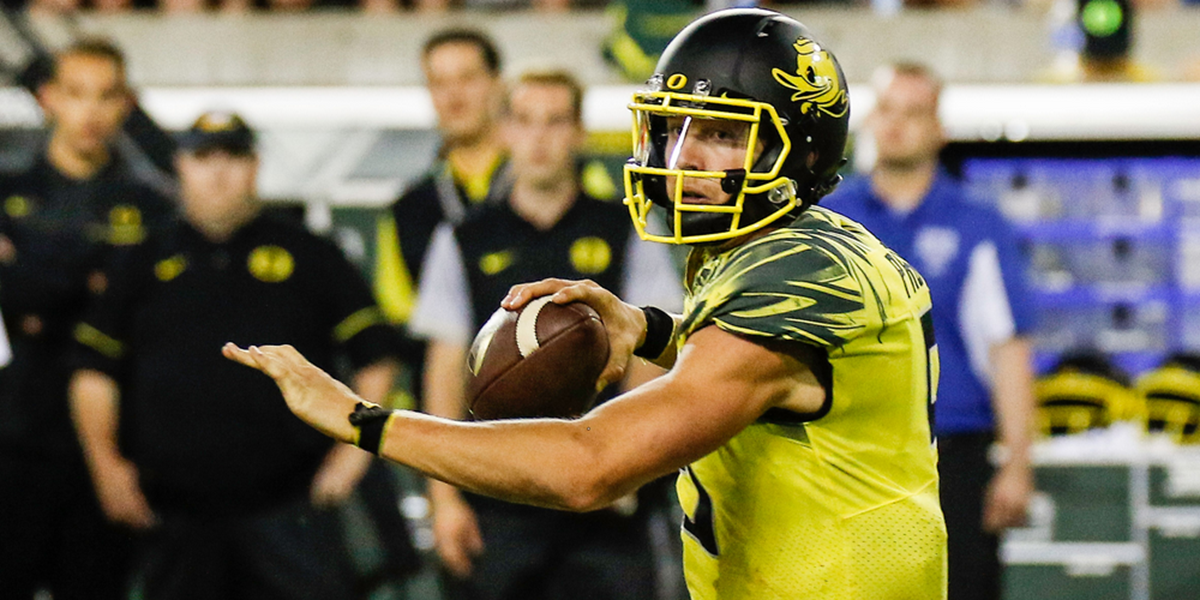 In 2016 Oregon brought in a graduate transfer quarterback as a safety net. Mark Helfrich burned Herbert’s redshirt on the last play of the first game with a healthy Prukop standing on the sideline. Herbert was going to play and his becoming the starting quarterback was inevitable. Justin Herbert was not the better quarterback at game one but he was by game six, getting his first start against Washington.

Prukop was a safety net. The Vernon Adams experiment had been a success, despite the injuries, and 2016 began with uncertainty in the quarterback room. So why wouldn’t Mark Helfrich dive into the graduate transfer pool for a second year?

In the end, Oregon did prove it could recruit and develop its own quarterbacks. Herbert would go on and be taken No. 6 in the 2020 NFL draft after starting for four years for Oregon.

In 2020, Oregon’s coaches are doing the same thing the coaches did in 2016. I would argue this is not only a prudent move but the smart move.

Oregon has a new offensive coordinator in Joe Moorhead and a new offense means there may not be a quarterback on the roster with the required skill set to run the new system. The quarterback room is also without a returning starter for the first time since 2016, the last time Oregon brought in a transfer quarterback to address a lack of returning experience.

Does the coaching staff really have so little faith in their recruits, especially projected starter Tyler Shough, that they need to bring in a one-year graduate transfer as a band-aid? No, more likely the coaching staff knows that they have a championship-level defense and they just hired a new offensive coordinator to bring their offense up to championship level, learning curve included. 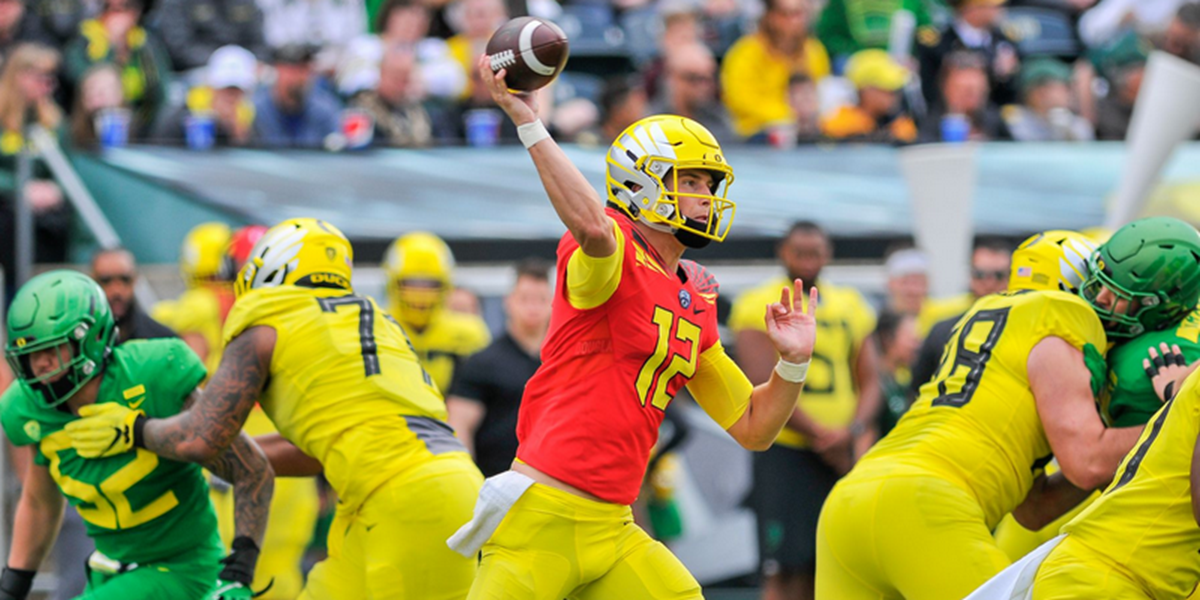 Will Tyler Shough be Oregon’s next great quarterback?

There is the very real opportunity to make the College Football Playoff and bringing in a transfer ensures there will be someone to run the offense at the highest level possible.

Does bringing in Brown mean that Shough will have to ride the bench as a backup for another year? Absolutely not, and I expect Shough to beat out Brown at some point in the season. If he doesn’t and chooses to transfer that is the way it is and another quarterback will get more snaps and move into position to become the starter.

If Brown loses, Brown becomes the backup, and the backup quarterback is the most important player on the sideline. So many Oregon seasons have either fallen short of their potential or outright ruined by an injury to the starting quarterback. Here are just a few:

2007 – Dennis Dixon goes down with a torn ACL against Arizona. Oregon loses a shot at the National Championship and Dixon loses his chance at the Heisman. What would have happened if Dennis Dixon was not injured in 2007?

2013 – Marcus Mariota partially tears his MCL. Oregon loses to Stanford and Arizona, eliminating the Ducks from the Pac-12 Championship and a potential National Championship appearance.

2015 -  Vernon Adams breaks his finger on a late hit by his former team in the first game of 2015. Oregon loses games to Michigan State, Utah, and Washington State as Adams heals. Then in the Alamo Bowl, Adams suffers a concussion at the end of the first half leading to a record-setting collapse and loss to TCU.

(This is a game as fans we have wiped from our collective memory. So sorry for mentioning it.)

2017 – Justin Herbert breaks his collarbone against Cal. Oregon loses games to Washington, Washington State, and UCLA while true freshman Braxton Burmeister, who should have red-shirted, tries to run an offense that is completely over his head.

It is unlikely the 2017 Ducks would have beaten Washington or made it to the Pac-12 Championship Game with a healthy Herbert. However, wins over Washington State and UCLA were completely possible. Having a capable backup ensures a more positive end of season outcome.

Anthony Brown coming to Oregon should not cause Duck fans great concern. Brown was not guaranteed the starting spot but instead offered a spot on Oregon’s roster to compete. If we know anything about Mario Cristobal, we know he values competition at every position.

College football coaches have more pressure to win than ever and Cristobal is doing whatever he can to ensure the Ducks are in position to win, with the end goal being a National Championship.