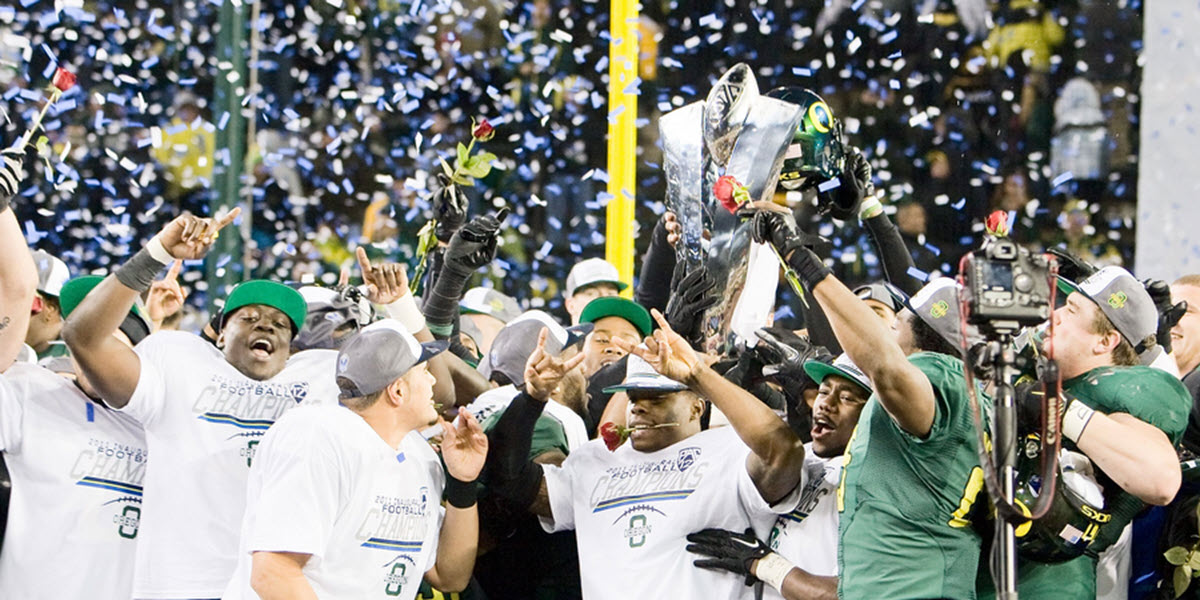 The expansion of the Pac-12 conference has not been to the benefit of fans. In my previous article I argued that the conference expansion has led to the loss of some key yearly rivalries, and that all we get in exchange is the promise of a glorious championship game.

The championship game is supposed to be a clash of titans, where the northern champion and the southern champion collide to provide a true champion of the Pac-12. At its best, it would be an inevitable collision between the two best teams in the conference.

The reality is something of an anticlimax. The current system hasn’t done a good job determining the best team in the Pac-12. In 2011, 2012, 2015 and 2018 the two best teams, based purely off their respective in-conference records, were both in the North.

This directly impacted Oregon in 2012 and 2015. In 2012, Oregon’s lone loss came from Stanford, when Oregon missed a field goal in the last minute of the game. Instead of having to play a rematch with 8-1 Oregon, Stanford went on to beat 6-3 UCLA to win the championship.

In 2015, Oregon went to “the Farm” and delivered Stanford their lone conference loss of the season. Instead of a rematch with 7-2 Oregon, Stanford beat a 6-3 USC team for the championship. Oregon and Stanford were the top two teams in the Pac-12 for much of the last decade.

Oregon and Stanford are often the best two teams in the conference, and because they are in the same division they are unable to compete for the championship. Pairing the two top teams, regardless of division, would give a better chance for a truly special conference championship game.

There is really only one dream scenario of how a conference championship game should play out, and that is that the two best teams in the conference play for all the marbles. Oregon has been in two of these games.

In 2014, Arizona defeated Oregon in Autzen. This sent all Oregon fans into a tailspin of despair over a potentially lost season. Oregon and Arizona met again in the championship game, and Oregon let the country know who really ruled the Pac-12, winning 51-13.

Last season, Utah and Oregon avoided each other during the regular season, only to collide in what was billed as the ultimate showdown for the conference crown. Most pundits didn’t give Oregon much of a chance, but Oregon put on a one-sided 37-15 demolition, squishing Utah’s dreams of a College Football Playoff appearance. The best way to avoid boring championship games is to pit the two teams with the best conference records against each other. Ideally this would come with every team playing every other team. However, that would be a pretty brutal schedule for everyone, and would probably make it more difficult to get into the playoff.

What do you, the fans, want to see? The division champions continue to play it out and hope the southern half of the conference starts putting up a fight? Or would it be better to watch the two teams with the best conference records, regardless of division, duke it out in a climatic conclusion to conference play?