Despite the growing concern over COVID-19 across America, the PAC-12 Conference will begin on November 6th, 2020. While that is a late start, it is not without the same questions and anticipation that would occur with a start two months earlier.

Can Oregon overcome the virus risks and defeat the conference foes to win the Pac-12 title? Some talented teams will face the Ducks and the odds of winning are not what we would usually think.

Other sporting competitions are now beginning to allow their games to go ahead, so clearly many in the sporting industry are of the same stance; taking appropriate precautions that will enable the competitions to take place and keep everyone happy.

The schedule for the PAC-12 conference has been updated and released, giving everyone a timeline for the games ahead. The entire decision to commence football is a sharp contrast to the decision made in August, which suspended sporting events until 2021 as a precaution. The first game for Oregon will take place on November 7th, where Stanford will play against the Ducks on their home turf of Eugene. CJ Verdell knows the thrill of winning a Pac-12 Championship.

The all-important PAC-12 Championship Game will take place on December 18th. The venue hasn’t been decided yet, but the hope is that it will take place on home field for Oregon if the Ducks establish the best conference record in the first six games. Oregon had strong odds to emerge as the favorites for winning the PAC-12 conference in 2020 after winning the PAC-12 championship in the 2019 season, and a Rose Bowl win has certainly helped to establish the team as having a strong opening position.

The conference coaches have come out and voted for the Ducks to defend their conference title this year, but what do the professionals who deal in such odds believe? I am fascinated by the odds they set and the reasoning behind them, and am often surprised how often they are more accurate than those in the profession of coaching and competing against teams in the Pac-12.

At first glance, it looks a lot like Oregon is primed to win the PAC-12 Championship for the second year running. This is naturally a bit of a cause for celebration among the players and fans. The confidence of the bookies is a welcome morale boost, but Oregon does have more going for them than that. A big factor for Oregon is that a number of the games being played over the coming weeks are going to take place in the state of Oregon. 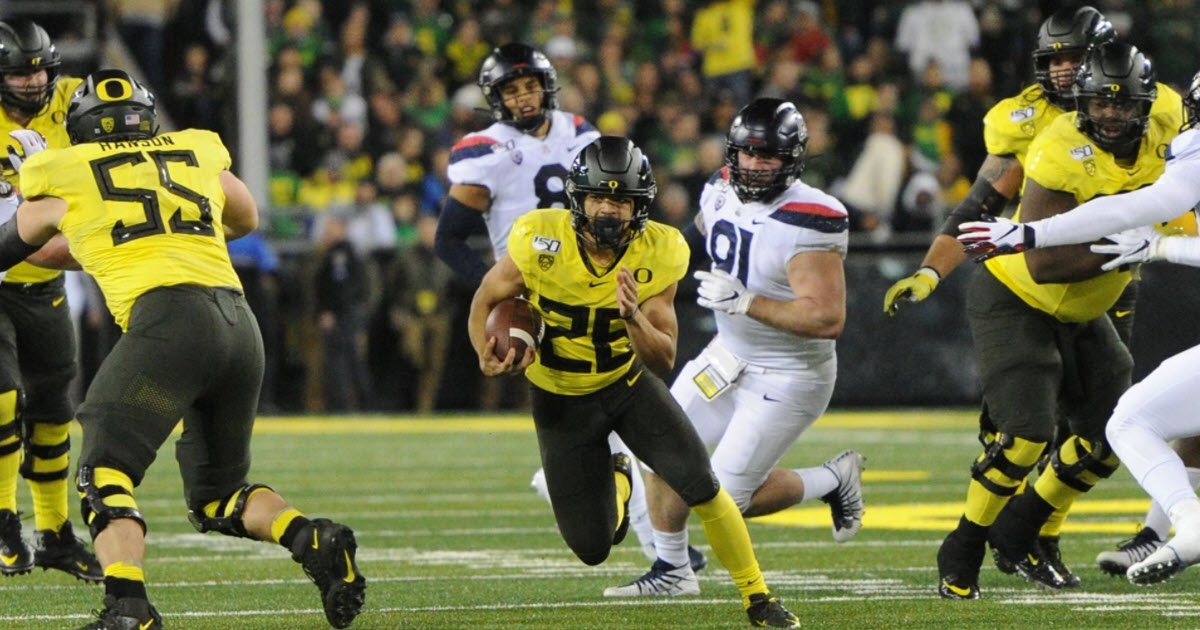 Travis Dye returns with experience and a jump-cut!

Out of the six organized and locked-in games, four of them play in Oregon. This home-field advantage is good for morale. Every team performs better at home, since it’s the same place they’ve trained at, and the environment they know inside and out. So home field gives a chance for a stronger performance.

Now obviously, because of the current restrictions on sporting events, the stadiums themselves will be empty. The fans can’t be there to support the team, but at the same time, Oregon will be surrounded by fans watching from home. The stadium may not be packed to the rafters, but the state itself is. The absence of the distractions of traveling will help, too, even with the short trip to Corvallis on Thanksgiving weekend.

A Team Built for a COVID Season?

A new offensive line and new starting quarterback at Oregon could keep the scoring average of the offense low in the early part of the season. Add to that how sunny days with comfortable temperatures will be unknown to this team playing in the Pacific Northwest in November and December. While this inexperience on offense coupled with rainy, windy days could hold the points down for the Ducks, it may not be the issue it would have been in the past. Travis Dye scoots for a nice gain through a Husky hole…

On offense … Coach Mario Cristobal has built a run identity made for chewing up clock and working well in adverse weather. Offensive Coordinator Joe Moorhead dealt with cold weather at Penn State and knows his offense can handle the challenges. But the biggest difference is what the Ducks return on defense. Even with the departure of Thomas Graham, Brady Breeze and Jevon Holland, Oregon’s defense has rarely had so much talented experience return as it has this year.

The defensive line has seniors Jordon Scott and Austin Faoliu returning. These two, along with proven talent in Kayvon Thibodeaux, Pop Aumavae and Mase Funa bring a depth to the defense that Duck fans scarcely ever see. Defensive Coordinator Andy Avalos will have another step up of improvement in his new defense, and the timing is perfect to keep the games close in this shortened season.

Oregon might just be built for this unique season for the first time in … ever? Jordon Scott makes it hard to run inside…

The mentality of the players is an important consideration as well, because as a team, they have had a taste of big games and big victories. They have also experienced losses that should not have happened, so their mental strength will be the strongest in many years as they will fight to avoid repeating those mishaps. That fighting spirit grounded in game experience can be a big element in close games, as this team grew significantly in the past two years at becoming a winner.

The margin the bookies give Oregon to win the conference is modest, but the Ducks are the favorite because Cristobal created a team that can overcome the mental and physical barriers that materialize when the games approach “crunch-time.” I can hardly wait for it to get started!