For all who have recently toured the renovated Hayward Field, such as the Oregon Track and Field athletes, “wow” has been the most common reaction. Even Olympic Decathlon winner Ashton Eaton was brought to tears, as the memories of historic Hayward Field flooded back to him. He marveled at the majesty of this incredible new look for Oregon’s premier sports facility.

He visited it with his wife Brianne Theisen-Eaton and their son, Ander, and all were “wowed” by the sight before them. It is superior to the Hatfield-Dowling Complex and the new Matt Knight Arena for basketball, as this was meant to be the finest track facility in the world. In the upcoming years, it will host five NCAA Championships and the World Championships and will be a major hub for Track and Field in the United States for years to come.

Truly, this is a treasure in facilities for the Ducks, and it makes you wonder about its potential impact on other sports … 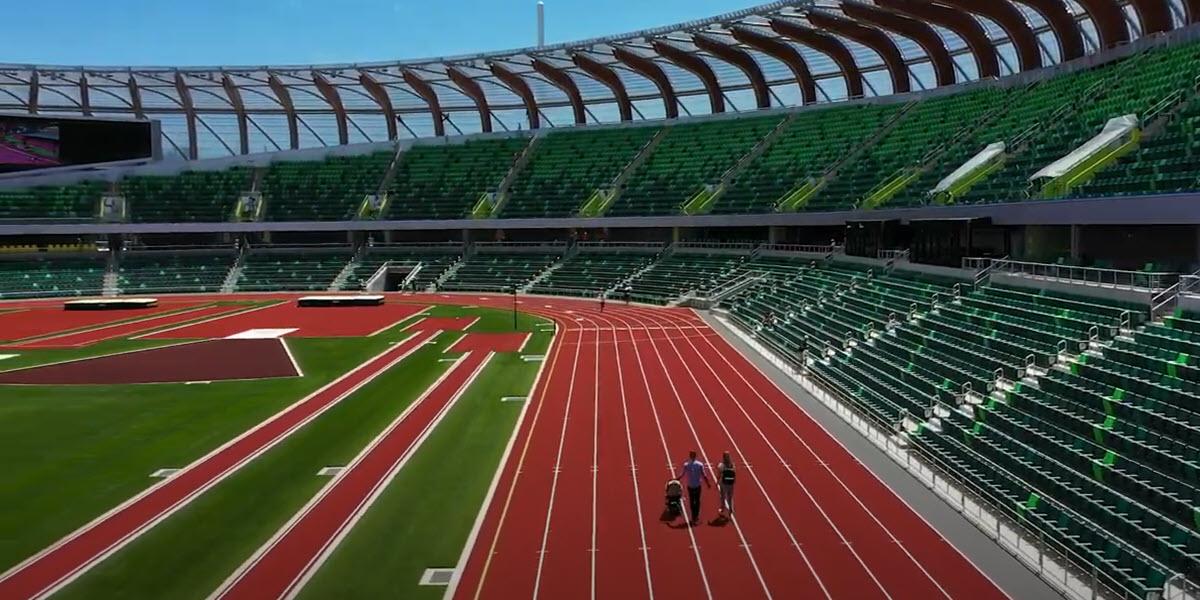 Ashton and Brianne Theisen-Eaton tour the renovated Hayward Field with their son, Ander.

The positive impact on recruiting for Cross-Country and Track and Field is obvious, but would the new Hayward Field help sway athletes in other sports, who will never actually compete there?

I ponder this as I consider the usual campus tour football recruits receive when they visit Oregon: They see the HD complex, the Jacqua Academic Center and, of course, Autzen. But what about a walk through Hayward to wrap up a visit? How can you not get a tremendous “Big-Time” feeling from being in such a modern and gleaming gem of facilities?

I have to believe that touring Hayward field would give any athlete the impression that Oregon is super serious about competing, and that being a part of the Duck family is much bigger than just being “part of a team.” I cannot imagine anything that more clearly communicates that Oregon is Big-Time than seeing this jewel up close. I am sure it would leave a lasting impression upon any recruit about the intentions of Oregon on the national and world stage.

Do you think it will have the same impact as I do?