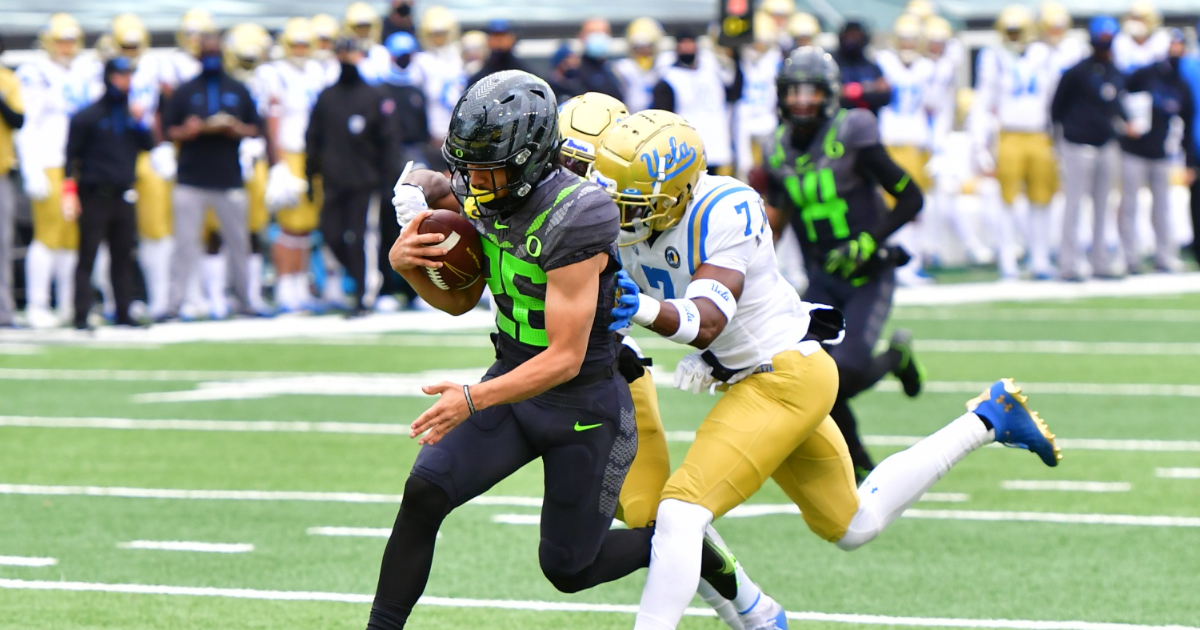 Our Beloved Ducks’ 2020 football season hasn’t lived up to snuff. It’s been a tumultuous year for the entire country, but we expected more of the outstanding recruits we were able to accumulate over the last couple offseasons. As a fan you can point to the starter turnover, loss of veteran presence, you name it.

Then again, we are just fans. Fans who may have seen one of the more exciting bowl games in team history to conclude 2019, narrowly beating superstar runningback Jonathan Taylor’s Wisconsin Badgers, but perhaps unfairly expecting more of a team we thought to be in a position to “reload” instead of “rebuild”. We’re fans who aren’t in the locker room, fans who don’t get to see the day to day of what these players are going through in a year unlike anything we’ve seen before. Don’t get me wrong, I want the Ducks to win as much as anyone. But even after dropping a couple games consecutively, there are several players to be excited about.

This Friday is a great time for us to see the strides this roster and these coaches have made to make the chemistry of this team operate at a high level. Given the performance in the past two games, there’s a lot left to be desired. But there are a few stars that are shining bright already just a few games into their first action in Autzen Stadium, and although it may be hard to see the brighter side at a time like this, this matchup against USC could be the perfect opportunity for these players to make a leap. Dye runs to the open field against the Wildcats, demonstrating his elite field vision

For me, the Pac-12 Championship will be Travis Dye’s big night, and it will begin his breakout implications for the 2021-2022 season. This could bode extremely well for the Ducks’ offense next year, assuming Dye chooses to forgo the NFL Draft for one more year at Oregon. I’ve loved watching his game diversify so greatly in the past couple of seasons as a Duck, and his ability in the passing game particularly really sets him apart from even the most elite of running backs in recent years across the nation. His vision and elite open field ability are traits that the NFL is going to be itching to get working at the next level, but for now, we can just enjoy the play of one of Oregon’s best.

Should 2021 be a “normal” season, I could see Dye pushing the Ducks’ former great De’Anthony Thomas numbers (1200 scrimmage yards, 16 TDs in 2011), sitting somewhere around 1100-1200 yards from scrimmage and 12-14 TDs. Scores come in bunches for Dye, and even being in an offense that doesn’t rely on that “feature back” role as heavily, he still has accumulated 6 TDs in only five games this season.

Like many of you, I am ready for the Ducks to get back the good foundation that’s in question now after the past two losses. This game against USC on Friday may have been the Huskies to play, but let’s see our Ducks make it their own. This is a great opportunity for Mario Cristobal to flex his team’s ability to prepare and bounce back for a high note conclusion to our short season. Should the Ducks win, I think it’ll be on Dye’s shoulders, as he firmly takes the torch from CJ Verdell into the 2021-2022 season.

What do you think? Is this Dye’s time to prove himself, or will another star emerge on offense?