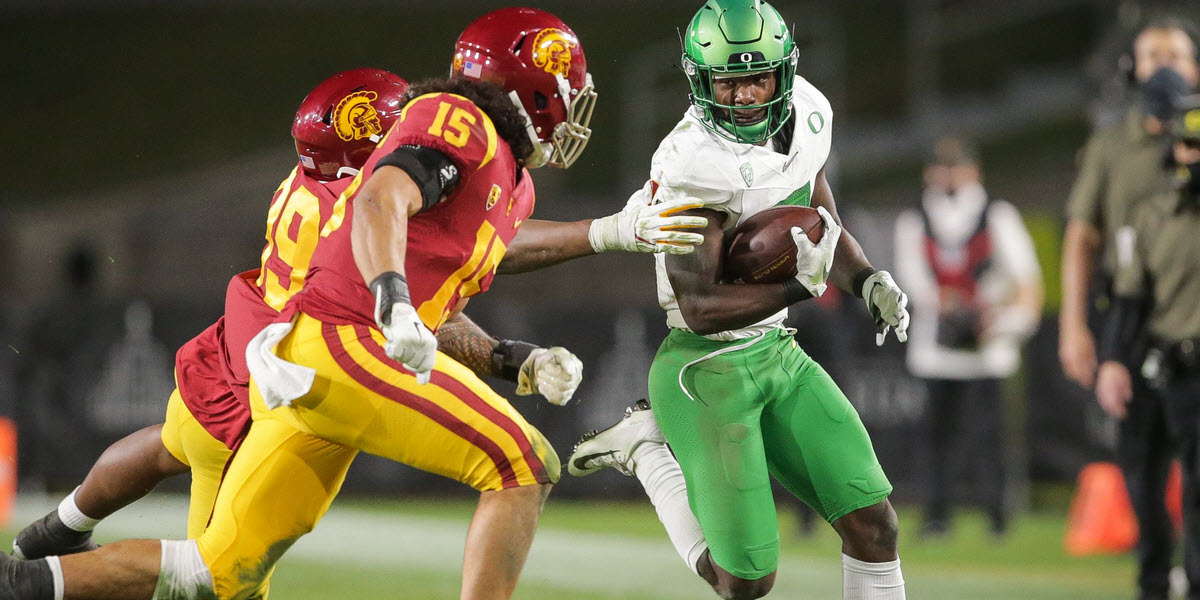 Oregon and USC seem primed to be the top two schools in the Pac-12. Both have top ten recruiting classes for the 2021 recruiting cycle according to Rivals and both teams are already projected to win their respective divisions. In terms of raw talent, Oregon and USC are miles ahead of the rest of the conference. It wouldn’t come as a surprise to anyone if we were to have a rematch of the 2020 Pac-12 Championship Game in the 2021 season and beyond.

However, it appears that USC’s head coach Clay Helton is shooting himself in the foot, at least in the long run. Before the 2019 season, Helton hired a new offensive coordinator, Graham Harrell, who is an Air Raid specialist from the Mike Leach coaching tree. This hire did elevate USC quarterback Kedon Slovis to national attention almost immediately and unsurprisingly USC has put up some massive passing numbers over the past two years in this system.

Helton has just made a new hire for the offensive line, Clay McGuire, who has spent time coaching with both Leach and Harrell. This is Helton doubling down on the Air Raid system and is a good indication that USC will continue to abandon the run in favor of a pass-heavy offense. It is worth noting that in Leach’s time at Washington State, he never won the North division, let alone the conference. He was, however, a thorn in the side of the conference as he had many seasons where he played spoiler to the conference’s heavyweights.

USC has better talent than anything Leach had at Washington State and the USC Air Raid has already come with more success than what Leach achieved at Washington State. Though Helton’s choice to hire an offensive line coach who has worked with the Air Raid is a strong indication USC has little interest running the ball. This is a concession from USC on their commitment to try to out recruit Oregon on the offensive line. 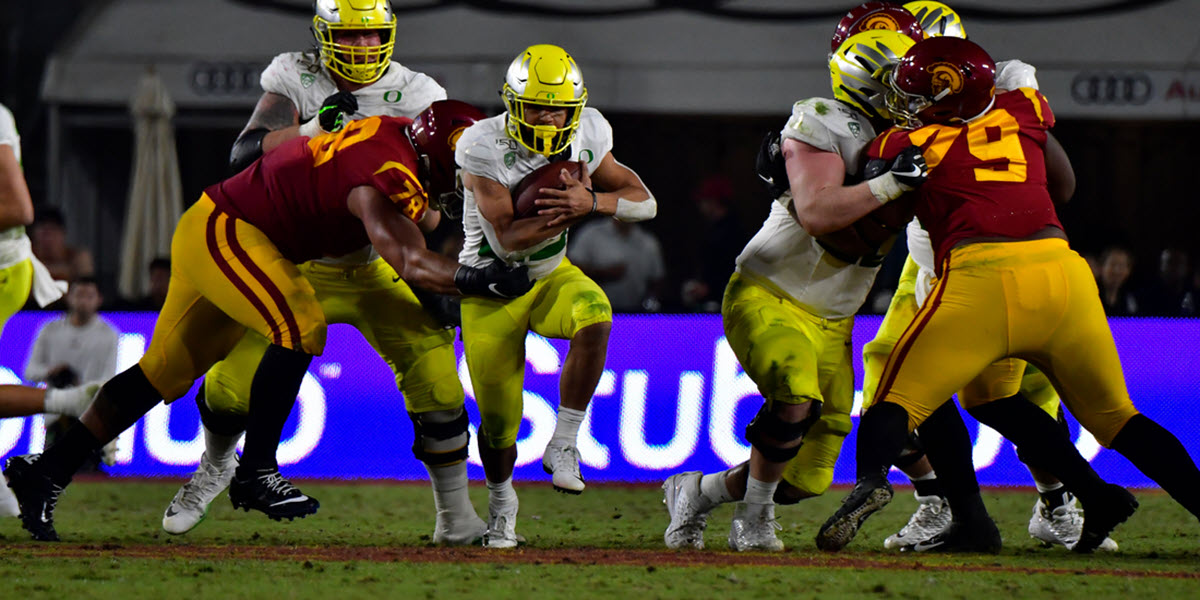 Oregon’s Offensive Line opens up a hole for Travis Dye to run through in 2019 against the Trojans.

The passing numbers may look great but Helton is setting USC up to lose big games. The Air Raid offense is great for teams that cannot recruit multitudes of four and five-star recruits because they are able to get their receivers in space and get them the ball quickly so they can make plays.

Though the simple truth here is that the Air Raid Offense does not win championships.

What does all this mean for Oregon?

Oregon is winning the offensive line recruiting battle and will continue to do so which will mean Oregon’s overall offense will have a greater ability to impose its will on opposing teams. USC’s Air Raid offensive line seems structured to just hold the line long enough for a quick throw to be made by the quarterback. This can be effective but in the Pac-12 Championship Game Oregon’s pass rush was just too much for USC’s offensive line to handle as they left Slovis nowhere to throw the ball but into the waiting arms of an Oregon defender. Expect this to continue to happen in future match-ups. 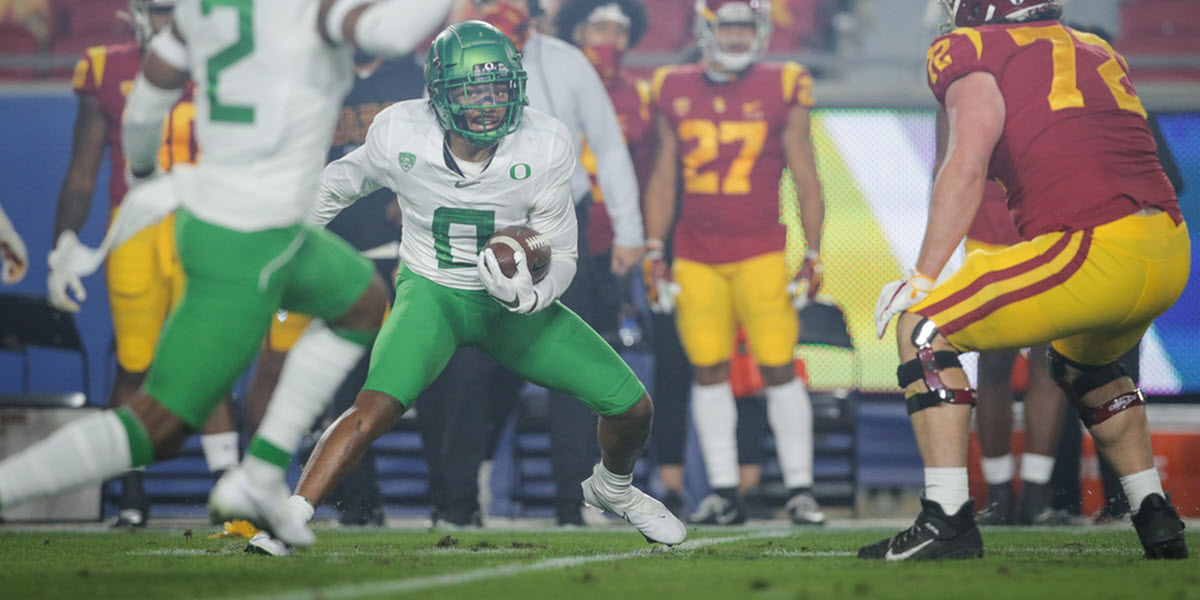 In the end, USC is going to be a dangerous team but by opting for a pass-heavy game they have limited their flexibility in their offensive design as their run game will stagnate. This will in-turn lead to Oregon continuing to successfully recruit the top offensive linemen and the backfield playmakers in the west.

This may allow Oregon to win a third consecutive Pac-12 Championship in 2021 but it might also reduce USC’s ability to compete with Oregon in the long run. Though all the recent National Champions had great passing-attack they all also had a good rushing attack to maintain a balanced offense. That is one thing in football that isn’t going to change, winning the battle in the trenches and the ability to run the ball is key to winning big games.

Oregon is devoted to the trenches and if USC continues the way it is going, Oregon will continue to outplay them. It is out of USC’s desperate desire to be relevant that they have adopted the Air Raid offense, but will it be their undoing?