How often do you get to watch both the Oregon Ducks Men’s and Women’s basketball teams play in their respective Sweet Sixteen matchups in the NCAA Tournament on a Sunday afternoon? Win or lose, it’s a GREAT day to be a fan of Our Beloved Ducks.

For the Men’s team, the No. 7 seed Ducks (21-6) are facing No. 6 seed USC Trojans (24-7) in what will undoubtedly be a nerve-wracking rematch after the Ducks lost to USC 72-58 last month at Galen Center. On the Women’s side, the No. 6 seed Ducks (15-8) will face off against No. 2 seed Louisville (25-3). Oregon is playing for its fourth straight Elite Eight appearance.

No doubt, these games are super exciting. Like you, I will be glued to the couch, staring unblinkingly at the television screen’s radiating glow and shoving handfuls of popcorn down my throat. Who wouldn’t? If you’re an Oregon fan, YOU LIVE FOR THIS.

But this article isn’t just about basketball. If you can’t get enough Oregon collegiate athletes playing at a high level, try this on for size: The Oregon Ducks Softball team (23-1) is UNBELIEVABLY GOOD. The Ducks are currently on a 14-game winning streak and their talents were on full display after wrapping up a series sweep of visiting Loyola Marymount Saturday at Jane Sanders Stadium in Eugene. 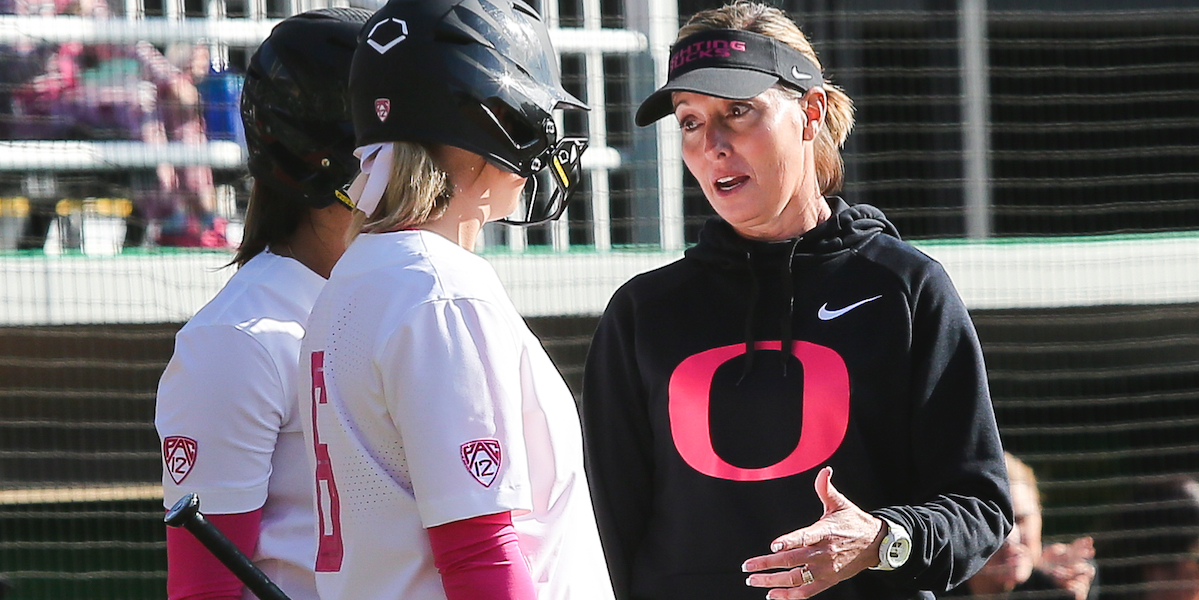 UO head coach Melyssa Lombardi has a top-notch squad this year that could go the distance.

Oregon opened the three-game series with a doubleheader on Friday, routing the Lions 14-2 and then closing the nightcap game with a no-hitter from freshman pitcher Makenna Kliethermes.

On Saturday, junior lefty pitcher Jordan Dail pitched four-innings of a shutout to win her first home start and lead the Ducks to a 6-0 win (Oregon senior Samaria Diaz pitched three innings to complete the shutout and earn the save).

Is this the year they win a national title? Could this be the team that goes the distance? If you’ve followed the softball team over the past 10 years, the Ducks have come heartbreakingly close to assembling a national championship team on several occasions.

T6 | Another backwards K for @RiaaRiaaa_ to end the inning and strand a runner on 𞷀.

But it really feels like UO head coach Melyssa Lombardi could finally lead the Oregon program to the Promised Land — the Women’s College World Series championship.

So after you fill up on hoops, check out Oregon softball. The Ducks are gearing up for a four-game series on April 1st in Corvallis against the Oregon State Beavers on the Pac-12 Network. Go Ducks!