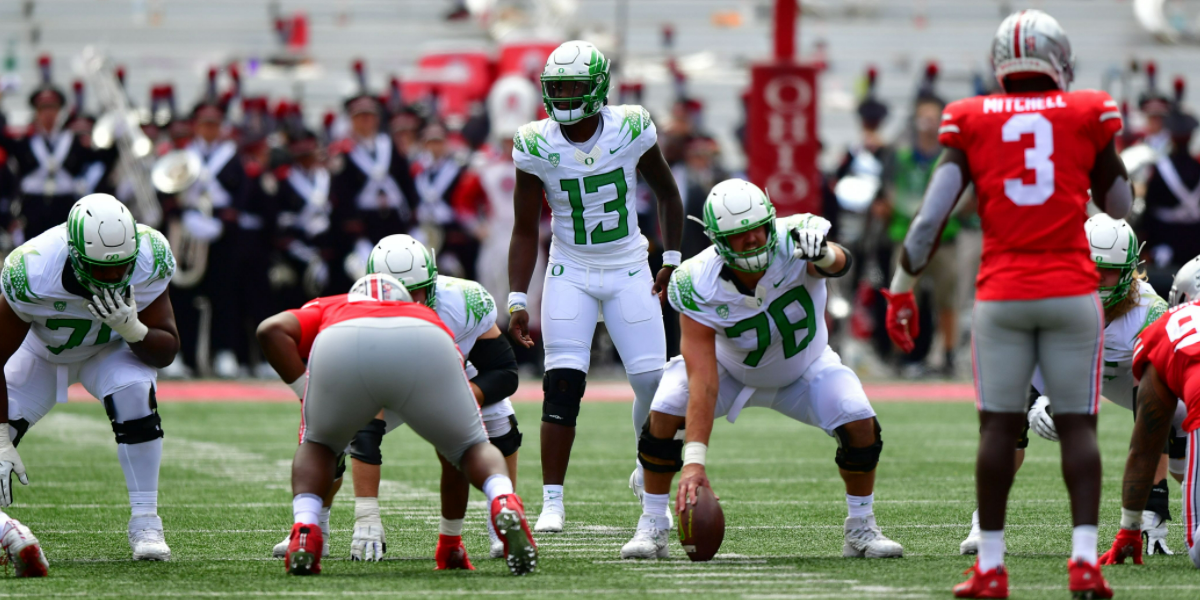 We need to have a conversation about Anthony Brown. The very mention of his name elicits a broad spectrum of opinions.

On one hand, the sixth-year quarterback has clear limitations as a passer, as evidenced by his mediocre-at-best 59.7 percent completion percentage, and the fact that Oregon’s passing offense ranks in the bottom half of the country. When comparing his talents to the quarterbacks on other title contenders — such as Alabama’s Bryce Young, Oklahoma’s Spencer Rattler, or even Ohio State’s CJ Stroud, who more than doubled Brown in passing yards in their head-to-head matchup — his raw numbers don’t exactly inspire confidence.

But on the other hand, we also know that numbers don’t always tell the full story.

Brown isn’t the crisp dropback passer that many elite college offenses possess. Despite that, he has managed to lead an offense that has elite potential with him at the helm.

Fans spent much of the offseason salivating at the thought of an offense led by Ty Thompson, a player who does possess superstar potential as a passer. Don’t let visions of future grandeur overshadow the impact that Brown, flaws and all, has made in the here and now.

The overlooked leader of the Ducks is masterfully operating Joe Moorhead’s offense, and he is proving that he is fully capable of being the quarterback of a championship-winning team.

Brown doesn’t have the skill set to sit in the pocket and pick a secondary apart for four quarters. Oddly enough, most college quarterbacks don’t.

Wisely, Moorhead doesn’t ask his quarterbacks to do this. Instead, he utilizes their legs, nearly as much as their arms, and that’s right up Brown’s alley. 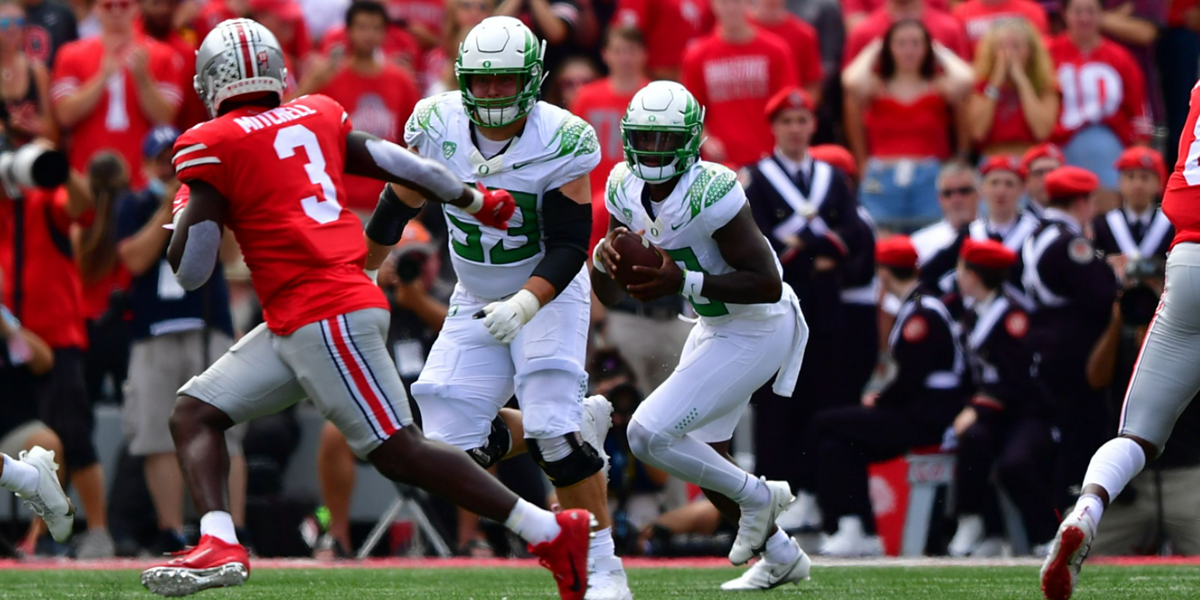 Brown is a big-time threat in the running game.

Brown has plenty of necessary skills to succeed as a collegiate quarterback, but his best attribute is his athleticism and ability as a ball-carrier. Brown’s not a burner in the same way that Marcus Mariota was, but it’s clear from watching him that he’s a natural playmaker with the ball in his hands. He has enough speed to beat defensive ends to the outside as a scrambler or in the option game, and he’s extremely physical and has tremendous contact balance, which allows Moorhead to utilize him as a runner between the tackles.

Brown gives Oregon a rushing threat at quarterback that it has not had since the aforementioned Mariota, and it cannot be overstated how much that opens up the offense. Moorhead has the freedom to call his full range of designed quarterback runs and multi-level RPOs, which give defenses a terrifying amount to prepare for.

Is a defense loading the box and playing with a single-high safety all game like the Buckeyes did? Moorhead can give his running backs sweeps and pitches to the outside. Is a defense overcommitting to the perimeter? Moorhead can have Brown pick up easy yards between the tackles, while using his tailbacks as a decoy in the flats to occupy defenders. 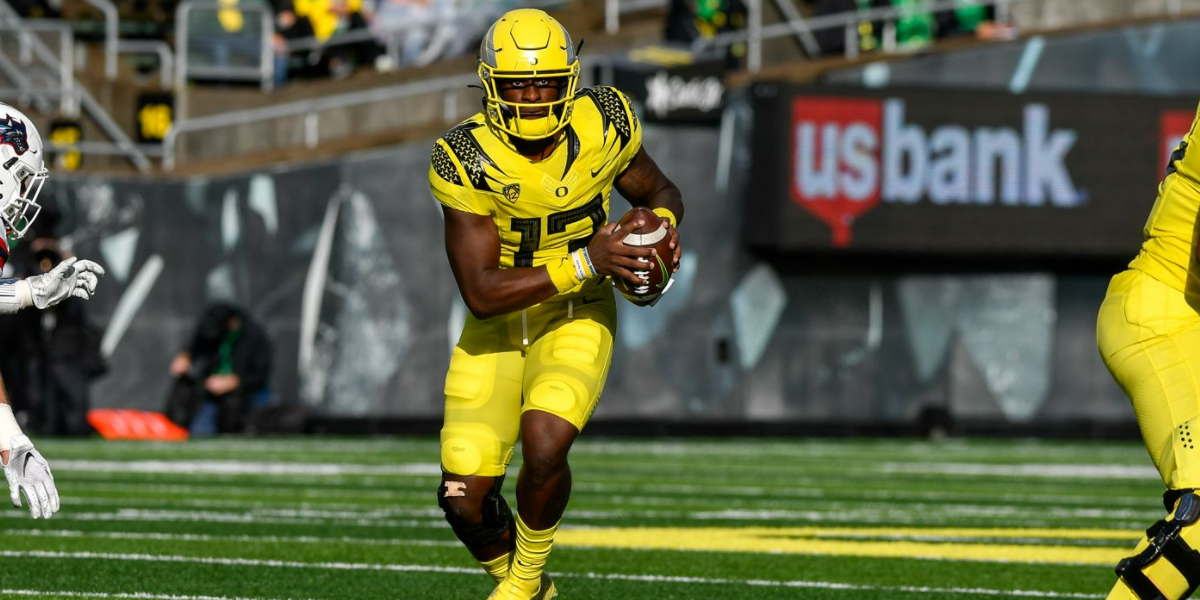 Having a quarterback as versatile as Brown allows Moorhead to play chess while defensive coordinators play checkers.

As for the passing game, while Brown might not have NFL potential, he does have traits that allow for Oregon to have a very efficient and mistake-free aerial attack. The first thing that jumps out when watching Brown throw the ball is how decisive he is. Brown doesn’t overcomplicate things; when defensive give him easy reads, he takes it.

This was on display time and time again against Stony Brook, when he took advantage of their consistent off-coverage by throwing quick outs. He did the same against Ohio State, taking advantage of their heavy cover 3 looks by making quick throws into the flats to his running backs early on. Those plays won’t make the SportsCenter Top 10, but they lead to a very efficient offense.

Perhaps most importantly, Brown’s decisiveness isn’t only present on underneath route concepts. With how well Oregon runs the ball, defenses certainly play their share of single-high looks against the Ducks, and that means one-on-one coverage on the outside. In order to alleviate the box, quarterbacks have to threaten defenses vertically and give them a reason to commit more coverage down the field.

Brown has taken shots down the field routinely this season, and although his accuracy in these situations has been shaky, he attempts them at a high enough rate that defenses have to consider it a threat. He has connected on a couple of vertical routes down the field, including a beauty to Johnny Johnson in Oregon’s win against Fresno State, and if he continues to take his shots when they’re there, more of them are bound to hit. Johnson catches a strike from Brown against Fresno State.

Anthony Brown probably won’t win a Heisman Trophy, and he might not even be an NFL Draft pick when all is said and done. But there is more to being a top-level college football quarterback than NFL potential and awards. Brown is a perfect fit for Moorhead’s multi-faceted rushing offense, and his strengths as a passer team well with how the Ducks want to operate on offense.

Don’t expect him to lead the country in passing efficiency, but don’t discredit Brown’s role in the success of the Oregon offense. His play is a big reason why the Ducks are legitimate title contenders, and that’s not something many people, including yours truly, thought was possible before the season began.