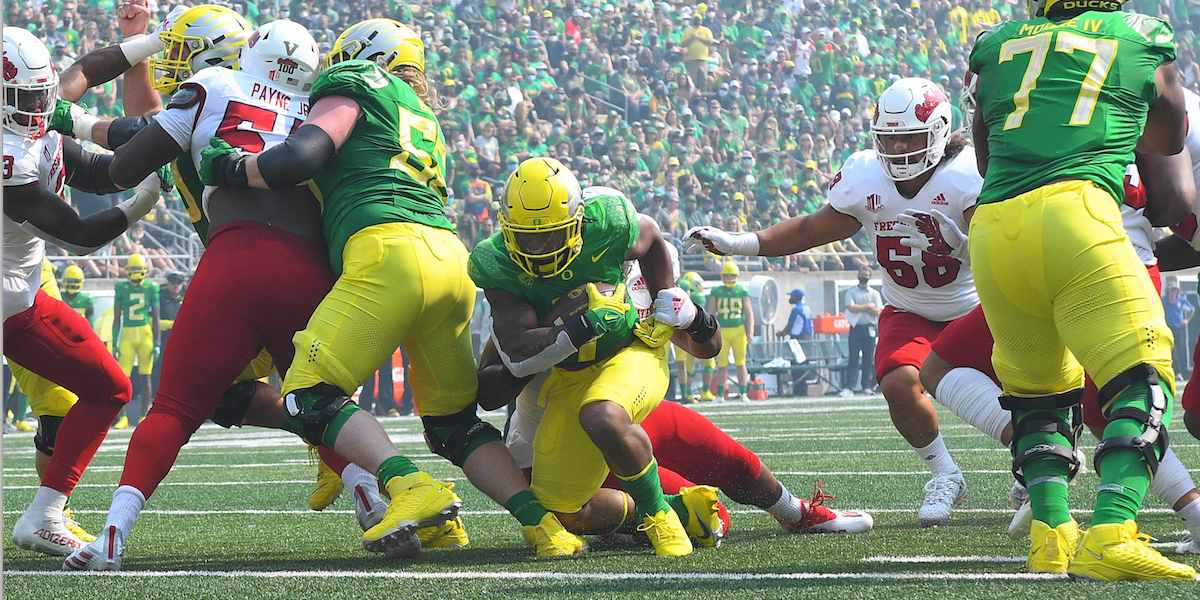 Better buckle up, Ducks fans, this could be a bumpy ride.

If there’s anything I have learned over the course of Oregon Head Coach Mario Cristobal’s tenure thus far, it’s that his teams are loaded with talent but they aren’t going to run away with every game before halftime by racking up video game stats. Cristobal delivers hard-nosed, smash-mouth, slow grind football.

The games are going to be hard-fought and close. Sometimes, too close. It’s an acquired taste that many fans aren’t used to. And if you watched today’s game, you probably still have heartburn.

Regardless…OREGON FOOTBALL IS BACK, BABY!

Despite an “unhealthy” air quality index (162) due to forest fires in the Cascades and a resurgent COVID-19 delta variant, my feeling was pure joy and excitement watching fans pack into Autzen Stadium on Saturday to see the No. 11 Oregon Ducks’ season opener against visiting Fresno State.

My excitement quickly gave way to nervous bewilderment for most of the game. Yes, Oregon pulled out a nail-biter victory over the Bulldogs, 31-24. Most of Oregon’s offensive efforts hiccuped and spazzed with first-game jitters. And yes, every team’s season opener is bound to have issues — Oregon is no exception. But the Ducks’ performance raised a lot of questions for me, namely, is this team a national title contender? Pac-12? And where are Joe Moorhead and CJ Verdell?

The Ducks (1-0) jumped out to a 21-3 first-half lead over the Bulldogs (1-1), scoring two touchdowns as the result of a couple of huge defensive plays, most notably a forced fumble by Kayvon Thibodeaux.

If we learned anything today, it’s that Thibodeaux is the anchor of Tim DeRuyter’s defense. Oregon’s star defensive end is a force to be reckoned with for any opponent, including No. 4 Ohio State Buckeyes next week. The Ducks’ defense overall looked pretty solid too, notching three fumble recoveries, four sacks and eight tackles for a loss on the day, which likely were the difference-maker in this too-close-for-comfort matchup. There were some issues in the secondary, (where was everybody?) but I’ll accept a bend-don’t-break philosophy.

Thibodeaux’s absence from the Ducks’ defensive front was glaring, allowing Bulldogs’ quarterback Jake Haener plenty of time to dink and dunk right down the field to take a 24-21 lead early in the fourth quarter. Haener went 30 of 43 passing, throwing for 298 yards and a touchdown. At times, the former Husky made it look too easy.

On offense, Oregon quarterback Anthony Brown did not fare as well in the passing game, completing 15 of 24 (62.5%) passes for 172 yards and a touchdown. In fact, the Bulldogs’ offense definitely outshined the Ducks, finishing with more total yards (373 to 358) and first downs (23 to 20). However, Brown made the most impact on his feet, including a 30-yard game-winning touchdown scamper.

Don’t get me wrong, I’m grateful for the “W.” But a couple of things about Oregon’s debut performance stuck out to me. Firstly, CJ Verdell is not being utilized as Oregon’s every-down power running back. While Verdell finished with 18 carries for 74 yards and a touchdown, he was largely absent from the Ducks’ running game in the first half. Why?

Secondly, where is offensive coordinator Joe Moorhead‘s dynamic schemes? Sure, there were lots of zone reads and some successful rushing plays, but the offense fizzled, backfired and stalled out — like a broken-down El Camino in your weird neighbor’s front yard. Am I missing something? I expected some fireworks and got mostly smoke bombs, sparklers and even a few duds.

Look, I’m happy with the victory, but the flavor is off — I have some questions and plenty of concerns as the Ducks head to the Horseshoe in Columbus next Saturday. Can you pass me the Tums?