We hate these games like Stony Brook, and we love them–right? We want to see tougher games against worthy opponents, yet we want to see the young-guns play and watch their development–hence our dilemma as fans with games such as this one. I know many look at it as a way to “get-things-right” and to “correct errors,” but I hardly think a team that lost to New Hampshire is going to give the Ducks a good representative set of game-reps. So I am going to focus on who I want to see in the game, and watch them very closely.

I am very concerned about linebacker at Oregon for the second straight year. Last year the problem was inexperience, and this year? Same problem. Yet if Isaac Slade-Matautia were still with us–we would not miss a beat at linebacker and he would be pleased as well with the playing time. Yet nobody would have anticipated this injury situation as it has evolved. What are we left with?

My understanding is that Noah Sewell will slide back to MIKE, or middle linebacker and the newbies will be playing at the WILL or weakside linebacker. I agree with the concept of leaving the great player where he can naturally make the most impact, instead of making everyone play out of position. This WILL spot is what I will be watching the most on Saturday, although the number of young-guns playing might leave us with quite a bit to discuss next week. Keith Brown, No. 21, looks the part of a great linebacker emerging…

Looking at the three freshmen expected to play the WILL…

Keith Brown, No. 21, 6-foot-2, 244 pounds from Lebanon, Oregon. He was a Rivals 4-Star, who had offers from Michigan, Washington, (Ha!) UCLA, USC and was projected as an Inside Linebacker although he originally he played at the MIKE position. Prior to his injury at Ohio State–he had a wonderful run-stuff at the LOS as he scraped over, filled the gap and exploded his hips into the running back. It wasn’t quite like Sewell’s big stop, but it was still pleasing to see from a true freshman.

Jabril McNeill, No. 17, (see photo at top of article) 6-foot-4, 212 pounds from Raleigh, North Carolina. He was a Rivals 4-Star who had offers from North Carolina, Virginia Tech, Arkansas, Washington, (Ha!) Auburn and Oklahoma and was listed as a weakside defensive end in his recruiting. Yet he has the speed and skills for linebacker, hence this will be fun to watch his development.

Jeffrey Bassa, No. 33, 6-foot-2, 217 pounds from Salt Lake City, Utah who was a Rivals 4-Star and considered the best player in the state of Utah that Cristobal plucked–again. His offers included Arizona State, Oklahoma State, Virginia and others out of the Mountain West Conference. DC Tim DeRuyter said this about Bassa in a 247 interview recently, “He’s a smart football player. He moves like elite linebackers do. He can sink his hips, run, change direction. He’s a guy who can cover backs out of the backfield. He gives a lot of possibilities as a WILL linebacker that you look for.”

It is interesting how Bassa began fall camp playing at the Nickel spot, which is a defensive back and linebacker combo position in the DeRuyter defense while McNeill started out playing at Outside Linebacker before moving to the WILL out of necessity. 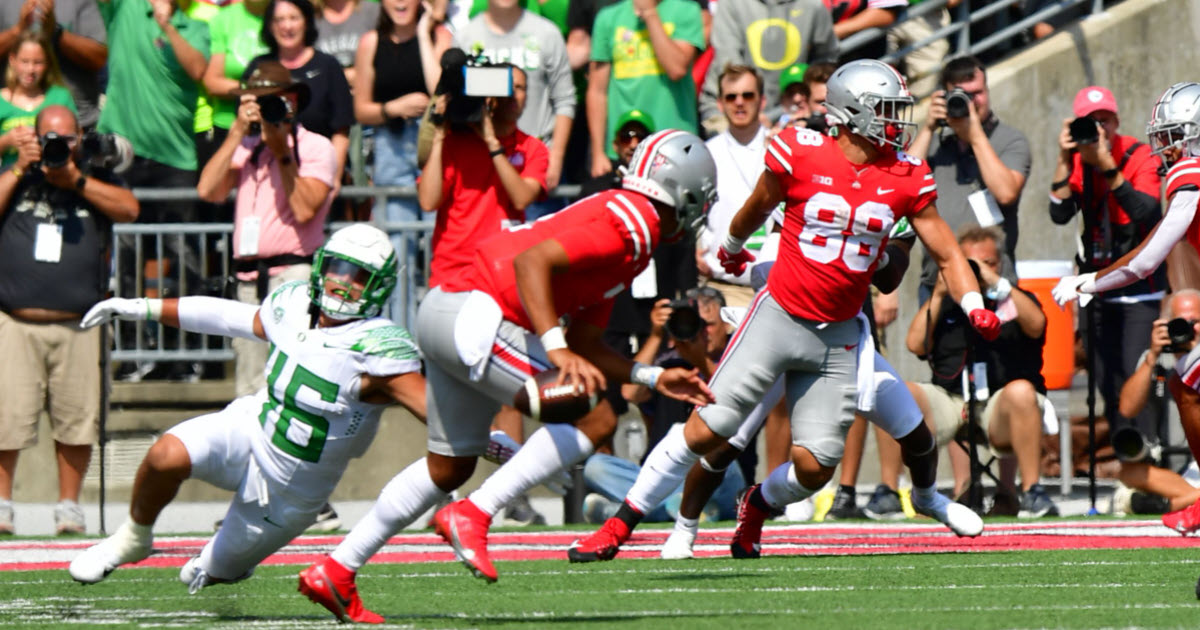 No. 46 Nate Heaukulani flushed out the QB on a 4th down stop.

You are only as strong as your weakest link, and it is almost breathtaking to me the number of freshmen playing on defense, yet did so well against the Buckeyes. Another player who had an amazing 59 snaps was No. 46, the walk-on linebacker from Portland, Nate Heaukulani, who is only 6-foot-1, 224 pounds. I gotta cheer for the state-of-Oregon player, and especially a walk-on, yet I want to see the young-guns learn and get their confidence in this game of playing opportunities.

It was fun to hear Colin Cowherd and Joel Klatt discussing the Oregon defense on the radio show, and while they both expressed how things need to be tightened up–they both acknowledged the amount of raw, young talent emerging from the repeated top-10 recruiting classes of Mario Cristobal. Klatt especially felt the defensive backfield has a very high upside over the next couple of years because of the speed and the “fast-twitch” as they made reference to.

There are so many positions to watch, and WILL linebacker is mine in particular; what are yours? Let’s discuss it all before, during and after the game because…