Pretty stunning, wasn’t it?  All the booing in Autzen, and over so many plays. This wasn’t about your typical disagreement with the coach over going for it (or not) on 4th down, or an occasional bad play call. This was a venting by the Autzen faithful. Frustrations with Coach Mario Cristobal have been simmering with a minority of fans over the offense for the last three and a half years. But in the game against Cal on Saturday, a critical mass of fans was reached.

This widespread booing leads me to all kinds of “ponder-points” and sets the stage for an interesting last half of the season. For example…

There is more there than one article can cover, but let’s get to some of the questions and get the discussion started in the OBD forum that is off to such an incredible start.

Should the Fans Be Booing at ALL?

I’ve changed my view on this over the years, as I used to believe as this writer does, that such behavior is reprehensibly classless and uncivil conduct. Yet I ask you–how can average fans make their feelings known to the coach and the Athletic Director? It would appear that Autzen has sold enough tickets to satisfy the coffers, thus any complaint in writing can be easily dismissed. Not so easy when thousands are booing… The fans pay, but have no say…

How crazy is it that the people paying the bills for the whole damn thing have no say in it? And when they offer their collective feelings in a verbal way–they are denigrated as if they, the fans, are the problem! They have no say in the hiring of the coach, as that was a player popularity contest in the end. The players don’t pay the thousands of dollars for reserve seats between required donations and sky-high ticket prices, the fans do.

It is the fans that make it all happen. They not only fund the football program, but their support supplies the millions needed to fund all the other athletic programs at Oregon. The fans should be listened to, especially now as a critical mass of disenchantment with Mario Cristobal and his Oregon offense has been reached. If Oregon and Cristobal act quickly, they can save the program from a severe decline in interest and ultimately, relevancy.

We may be Ducks, but that booing was the canary in the coal mine for Oregon football. Mullens and Cristobal: are you going to be grateful for the warning, and do something about it?

WHY Would the Fans Boo so Much?

At times I think the athletic department does not recognize that the older donors use modern tools as well. We can now access games of the past and apply the eyeball test to confirm what our gut is telling us about this current team. We may be 5-1, but this is not like the teams of the four coaches over the decade before Cristobal took over. Fans can see no offensive system in place, no offensive identity, an offense that is boring to watch and that offers no hope of scoring enough to win at the highest levels. 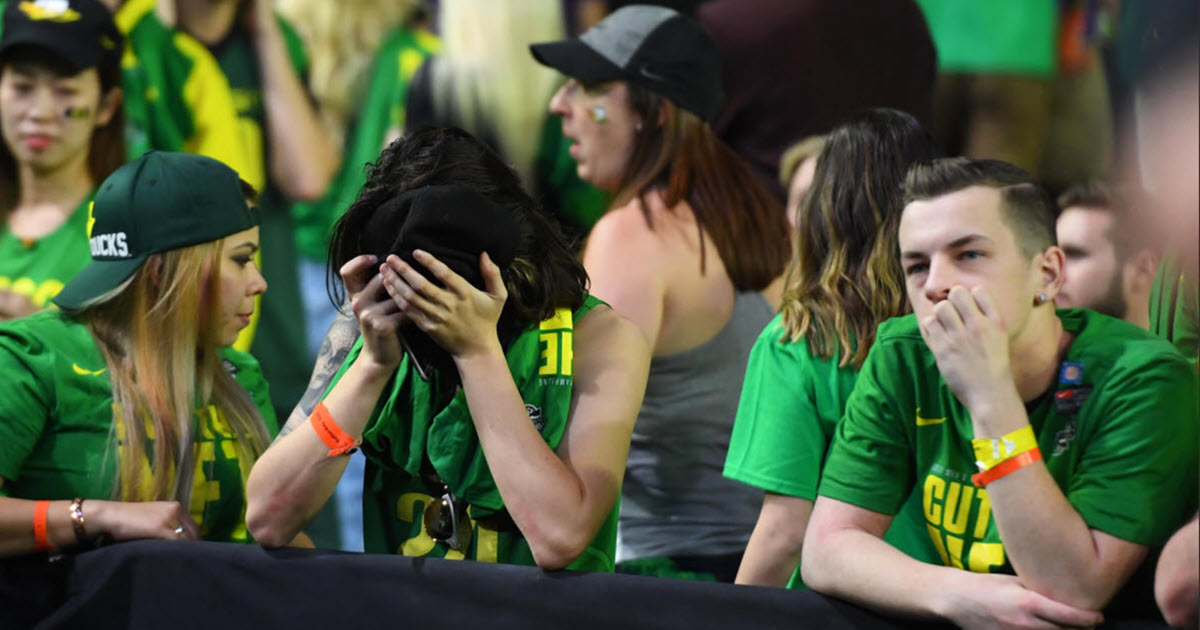 We have to put up with this?

It feels like they truly think we fans are rubes, who will put up with anything. They forget how many coaches we watched grow, and while we do not know the Xs and Os as a coach does–we can see and feel it from the field. We know a polished offense when we see it because at Oregon….because we’ve seen a ton of them. From the exciting West Coast Offense of Mike Bellotti, to the classic Oregon Spread Shotgun Offense of Chip Kelly/Mark Helfrich to the Gulf Coast Offense of Willie Taggart that in only one year outscored any year of Cristobal. (With an injured Herbert tied behind his back!)

The fans are watching Justin Herbert blossom as a quarterback after his four years at Oregon, and the fans can see the bad option decisions made by the current quarterback at Stanford along with open receivers missed. The fans have witnessed amazing quarterback coaching and play over the years in Autzen, and when they see the same mistakes occurring against Cal that they watched on television a week before from a sixth-year senior?

They have every right to boo.

The fans can see the massive offensive under-performance due to choices of Cristobal, compared to the coaches before him. They can see the lack of innovation, the lack of explosive plays and how Oregon has gone from the most entertaining team to watch in college football, to the most boring for even the most faithful fans. There are more than enough experienced players on offense to be scoring more than what the fans see now, versus the past and what other college programs are doing now with Oregon’s prior offenses. A ton of tough running in the Cristobal offense.

At the OBD forum we have some unique people who create colorful terms to describe our frustrations with the offense. I like how Duckpop22 tells us how, “our touchdown drives (few as they are) strike this fan as slogs through the mud pots of Yellowstone Park.” Very true, as it used to be so easy for the Ducks to score, while now it is so laborious.

When someone coins a phrase that becomes part of the new verbiage among Oregon faithful, there is truth within it along with the humor. Our own 30Duck began calling the low-scoring, predictable Cristobal system as the “Prevent-Offense,” and that still brings laughter, and wincing at what the Ducks could be.

WHO Should the Fans Boo at?

In the end, it is the coaches responsible and I view the booing as I do about what we write about the players and coaches in the OBD forum. We clearly state that being critical of coaching decisions or player performance is completely acceptable–since that is what fans do on a forum/message board. What is off-limits in our rules, (No. 26) is getting personal in any way toward a player or coach. No ad hominem attacks are allowed; quite a bit was written in the forum about Anthony Brown‘s decisions and these posts are read by thousands of people.

Isn’t that like booing his decisions and not him personally?

Thus, I think we should apply our rules of conduct here to how we verbally express our displeasure at coaches and players in Autzen; we boo the poor decisions and not the people personally. Yes I know many think players are off limits no matter what, and I say baloney. We learned during the player revolt a year ago the value of total benefits at Oregon for a football player are just under two million dollars over four years, and now NIL has increased that substantially for certain players. (Like quarterbacks.) The players and the coaches know they are in the public eye and are aware that “this is part of the deal.”

They get the glory, and thus they should also get the grief; a little bit of booing is a pretty minor price to pay for the coaches’ fat contracts, or the aforementioned value of the time spent as a football player/student at the University of Oregon.

We heard in the past from former coach Chip Kelly about how “Oregon fans are the most intelligent anywhere.” That sentiment has been confirmed by sportscasters such as Kirk Herbstreit and Chris Fowler along with so many others in the media world over the years. Oregon fans know when to be loud, and when to be quiet.

And now, it appears, they know when to boo.