Over the past several years, Washington State’s run-and-shoot offense has created nightmares for opponents late in the season. But after losing former head coach Nick Rolovich and four assistant coaches last month, the Cougs (5-5) have been playing with an especially large chip on their shoulder.

For some reason, the Ducks (9-1) have struggled in recent years to bottle up the Cougs’ offense, although much less so since Mike Leach sailed his pirate sloop out of the Palouse. Many Oregon fans expected another tough night when Wazzu came to town hoping to knock off the No. 3 Oregon Ducks on Saturday night in Eugene.

But the Ducks shut that old narrative down and told a very different story, dialing up defensive pressure and cranking up the power-run game to cruise past the Cougars, 38-24. The Ducks’ run attack proved too hot to handle, racking up 307 total rushing yards. On the other side of the ball, Oregon’s defensive front disrupted WSU’s offense all night long.

Wazzu quarterback Jayden de Laura posted some impressive first half numbers, completing 14 of 19 passes for 199 yards and a touchdown. However, de Laura also manufactured a couple of first half turnovers, including losing the football at the goal line on the Cougs’ opening drive, that helped give Oregon a head of steam and take a 14-0 lead early in the game. (NOTE: Brown also lost a fumble at the goal line trying to punch the ball into the end zone.) 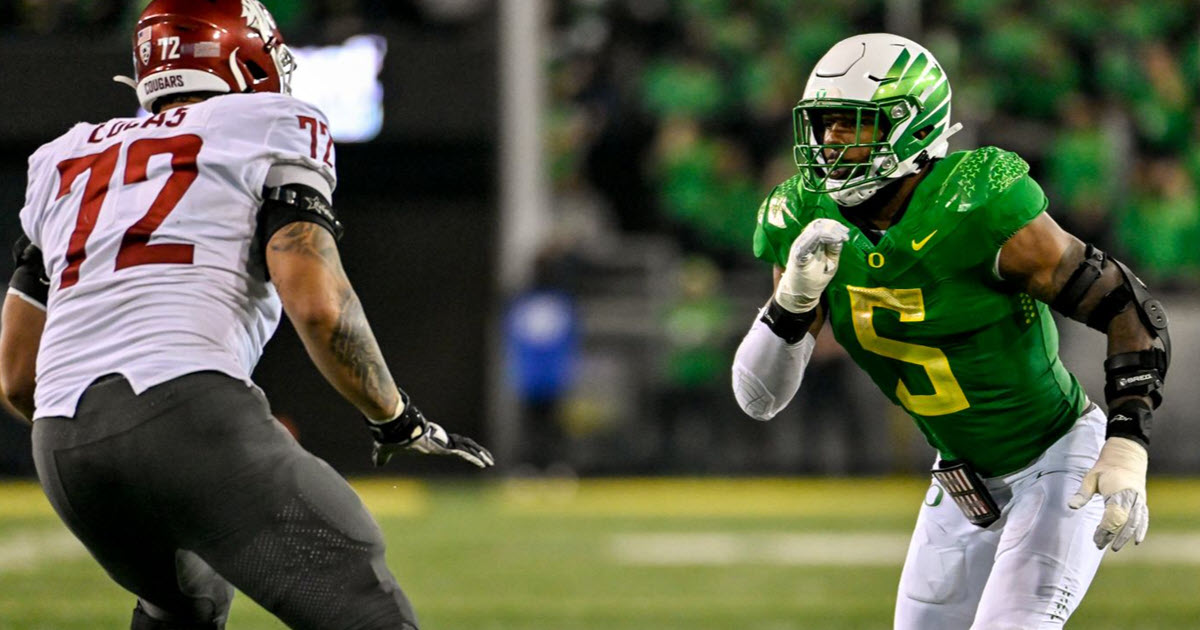 Kayvon Thibodeaux and the defense disrupted the timing of the WSU offense impressively.

Despite Oregon’s defensive front putting some heavy pressure on de Laura, the Cougars found a way to compile successful drives in the first half, tying the game 14-14 before halftime. And while Brown’s first-half passing statistics (Brown went 9-of-12 passing with a touchdown by halftime) weren’t as dynamic as de Laura’s early aerial display, the sixth year senior more than made up for it on his feet in the second half.
——————————————————————————————-
The Our Beloved Ducks Forum is BACK! Come get the links to Oregon Sports articles, the press releases from the Oregon Athletic Department and the news from your fellow Duck fans. It is the only safe place on the web for Duck Discussion, such as today’s article, so join us over there!
——————————————————————————————-
It’s no secret that Oregon lives and “Dyes” by the running game. Since CJ Verdell’s season-ending injury, Oregon running back Travis Dye has been on a hot streak, running like his hair is on fire. But it was Brown, not Dye, who posed the biggest problem for Wazzu on the ground. 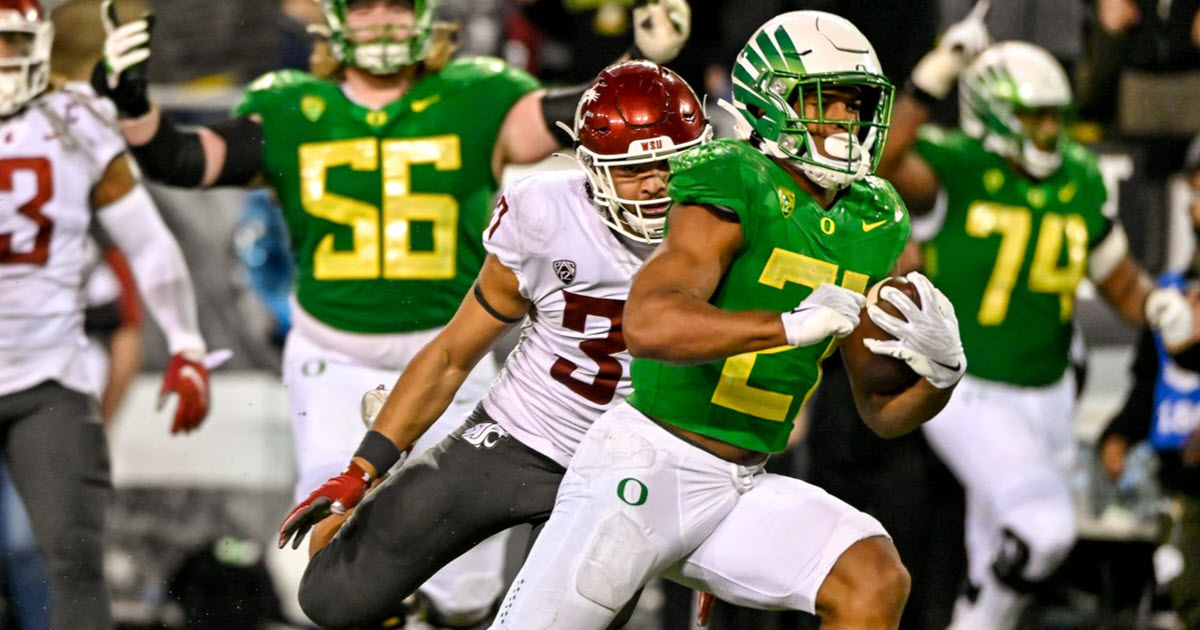 Oregon’s defense got stronger as the game went on, completely disrupting deLaura’s passing rhythm and holding WSU to a paltry 52 yards rushing. In the fourth quarter, de Laura looked like a panicked squirrel on a highway, frequently flushed out of a collapsing pocket by Kayvon Thibodeaux (two sacks, two tackles for loss) and freshman Jayson Jones (one sack, one tackle for loss). The sophomore play caller was forced to make difficult throws, which ultimately led to two interceptions.

Oregon continues to hold up its end of the bargain by winning conference games against tough teams down the stretch. Full steam ahead to Salt Lake City!