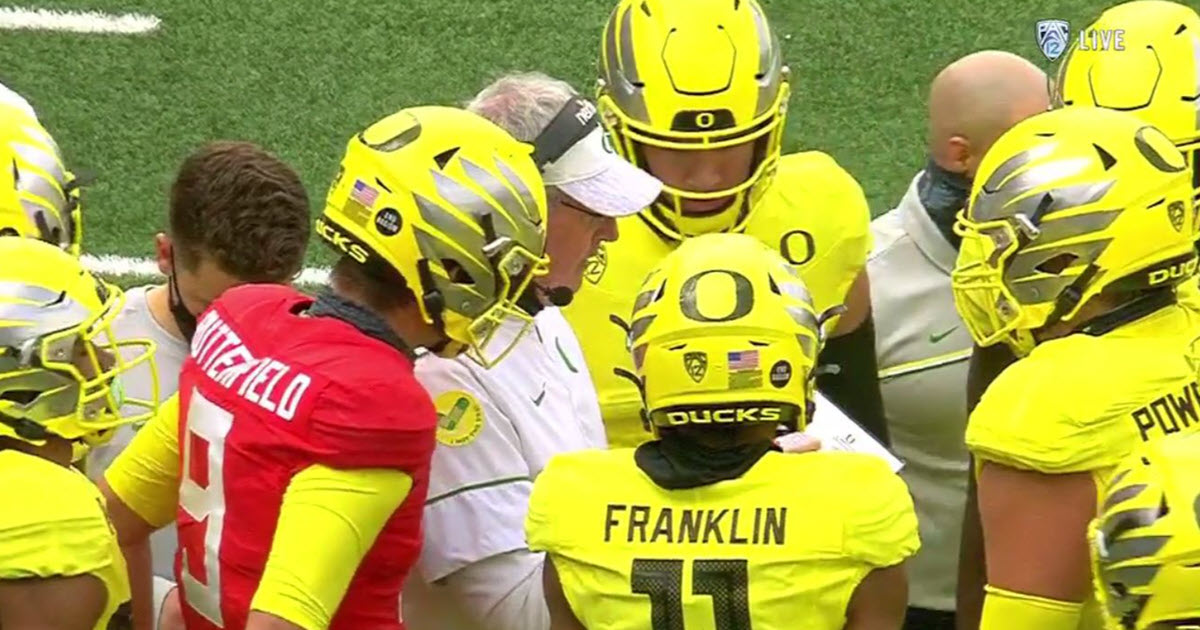 We are very lucky to have former Offensive Coordinator Joe Moorhead return to coach the Oregon Offense in the 2021 Alamo Bowl. Considering what I imagine he has been through, it is very gracious on his part. Yet I feel there are other elements behind this decision, and why it feeds into my theory of why the freshmen quarterbacks will never the field on December 29th. This is a short article meant to create some discussion about whether you see it as I do concerning Joe Moorhead and Mario Cristobal.

Rob Mullens and the Fans Were Snookered by Cristobal

I wrote in the past how I thought Cristobal misrepresented what he was going to do on offense to the fans and to Athletic Director Rob Mullens, as I cannot imagine Mullens going along with what actually transpired. Prior to Cristobal … Oregon was the first football team in NCAA history to have averaged 45 points a game for five years in a row! The nine year average between Chip Kelly and Mark Helfrich was 43 points per game, and even the worst year of Helfrich in 2016 was still better than any year of Cristobal.

In his introductory press conference, Coach Cristobal stated right here, that he plans…“A tremendous investment in the offensive and defensive lines….a tremendous investment in being an explosive football team, creating explosion plays, being exciting, making sure that our fans love to come out and support it, because it’s a brand of football they love to see and support.” Mario Cristobal in his introductory press conference in December of 2017 that I attended.

Is that what any of us saw? Instead we witnessed a big drop in the Oregon offense to an average of 33 points per game over the four years under Cristobal, and I sincerely doubt that Mario accurately represented to us fans or to Rob Mullens his true offensive philosophy when he was hired.
——————————————————————————————–
The Our Beloved Ducks Forum is the most extraordinary Oregon message board, a GREEN REFUGE! Come get the links to Oregon Sports articles, the press releases from the Oregon Athletic Department and the news from your fellow Duck fans. It is the only safe place on the web for Duck Discussion, such as today’s article, so join us over there!
——————————————————————————————–

Moorhead was Also Snookered by Cristobal

I believe the same snookering sales job was done in the recruiting of Joe Moorhead to Oregon by Coach Cristobal. Lots of promises and impressive prose backed up by Mario’s unshakeable confidence that was so infectious and so easy to be attracted to. The man made us all believe…

“Come to Oregon, Joe; certainly you can certainly improve on the paltry scoring average of 35.10 points per game under Marcus Arroyo!“ The irony dumped on us fans is how we demonized Arroyo as the scapegoat, while suspecting that Cristobal was behind it.

Then Moorhead’s offense dropped to 31.35 points per game over his two year period as offensive coordinator! Things got worse under Joe, and again … what was the common denominator with both coordinators? Things went down after that glorious day in Columbus…

I believe that Moorhead feels his national reputation was soiled by his time at Oregon, as you would have to raise serious questions if you’re an Athletic Director or head coach who is considering hiring him to a major program as an OC or head coach. This would also be an element in explaining his exile at the University of Akron.

Coach Moorhead now has a chance to implement his offense unshackled in the bowl game, and demonstrate the true scoring capacity without the presence of Cristobal looming over him. It is possible that Oregon will give Oklahoma a battle that requires a team to survive a shoot-out. This one could be quite fun to watch… Anthony Brown and Joe Moorhead might be loose for this last game for them both.

Play freshmen quarterbacks to build for the future? Not Joe’s problem, and frankly, he might feel that Oregon owes him some slack due to the damage on his national reputation from his time here. However flawed, he will view Anthony Brown as his best chance to cut loose on offense, and I cannot help but wonder if that freedom on offense might not trickle down to the quarterback give him the confidence to go-for-it?

I’ve thrown a ton at you to process, and the good news is how we have 11 days to consider all this because…