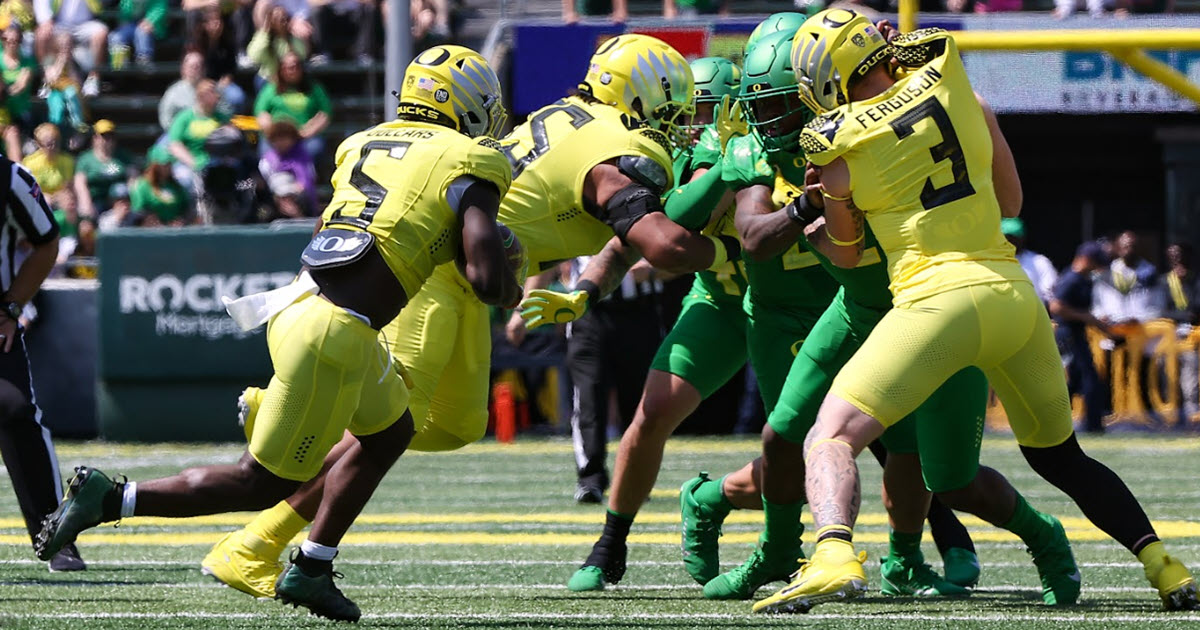 Like most observers of the Oregon Spring Game, I was pleased overall with the beginning of the Dan Lanning era. The discussion on our forum covered most of the major points, but I thought I’d  take some time away from playing Casino Rewards Captain Cooks to share what I believe are “hits” and “misses” of this 2022 Oregon Spring Game. The positive aspects were surprises and unexpected, while the negative ones occurred in unlikely categories and bear watching closely this fall.

I have made some very big calls over the last decade that turned out to be correct and thus have been an unapologetic, insufferable braggart at every opportunity. However, I do believe in applying “critical analysis” to the coaches and players, and consequently feel responsible to hold myself to the same standard. I have some signficant “misses” to ‘fess up to as we begin…

I was “meh” about this on the Our Beloved Ducks forum, but in reality was much more highly opposed to giving a precious scholarship to a below-average receiver coming home as the prodigal son. I could not have been more wrong, as No. 23 gave us a thrilling Jeff Maehl impression making tough catches, but also shielding the defenders from making a play on the incoming pass. The offense needs a clutch third-and-eight receiver, and he shouts filling that role from day one. (I am an idiot) 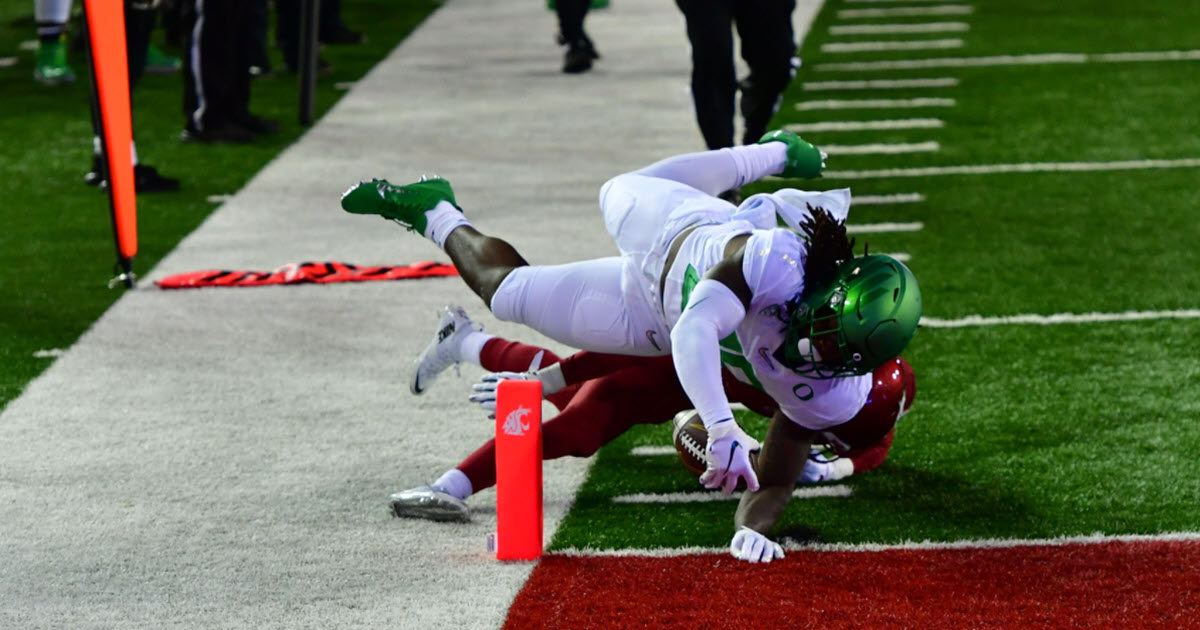 DJ Johnson had a pretty cool first touchdown at Oregon…

That was where I wanted to see him with all the key offensive plays he has made over the last two years. However I yield to the coaches, as we have a couple other superb TEs that get open, (Terrance Ferguson and Moliki Matavao) but we do not have a pass rusher in the caliber of Johnson. A stat line of seven total tackles, (remember–he is not a linebacker, but a defensive end!) four sacks with five tackle-for-losses? Good call coaches! (I am an idiot)

As it turns out, my misses turned to be big hits for the Ducks.

I really liked how well so many long downfield passes were delivered, as Bo Nix throws an accurate and very catchable long ball–especially important if it is on the back-shoulder. Both Ty Thompson and Jay Butterfield threw some dandy long-balls that have not been witnessed at Autzen in this frequency for a long time.  I think we will average more than five yards a pass play in 2022!

I am dismayed at the number and type of interceptions by all three QBs; two picks were simply bad throws behind the receiver that could be caught by a defender. Two others come under the never-should-happen variety as the interception directly to a linebacker by Ty Thompson was inexplicable. I had heard how Bo Nix could throw some wonderful passes one series, and throw some “WTH” type the next, and we saw that terrible judgment when he was flushed out of the pocket and threw one not-even-close to the Oregon receiver.

Is that why Georgia fans refer to him as “Bo Pix?” 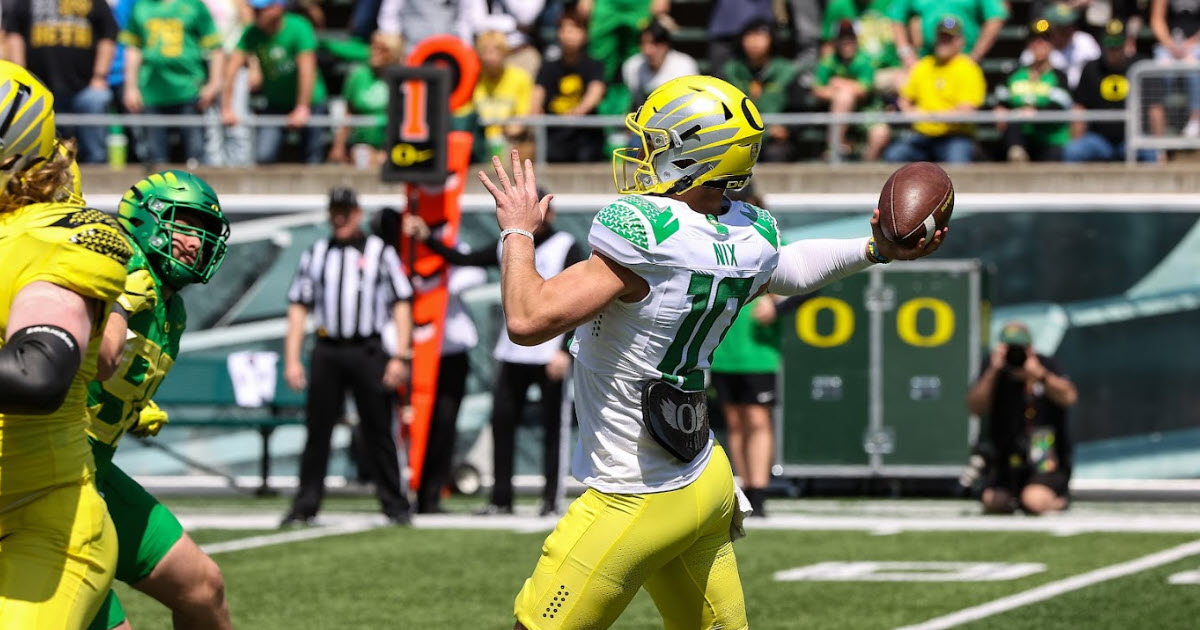 My FishDuck Friends…a pass completion percentage by all quarterbacks of just 52% (36 for 69) when it was primarily against inexperienced DBs and walk-ons? This is a red-flag to watch for in the future, IMHO.

Hits for the New Offense:

So many passes were deeper crossing patterns that naturally create more yards after the catch and have greater scoring potential. Total passing yards of 611 total between both teams is impressive, and fun to watch. It is evidence of creating the favorable matchups for players like Seven McGee that we’ve been reading about the last month.

Receivers were gaining superb separation from defensive backs and I credit receivers coach Junior Adams for getting Oregon wide-outs open.

I did not see a single Plodding Pistol play!

We are finally seeing some snaps from under center, and on the telecast–even Rich Brooks confirmed the same concern that many of us fans have had inside the five year line. If it is good enough for Clemson and Alabama…? Dont’e Thornton can get open!

Misses for the New Offense:

A rushing attack of 28 net yards total for both teams? Didn’t see that coming! I will be going into this more in-depth in later articles, but the profile of the offensive linemen needed by Coach Cristobal and Coach Lanning are different. It shows up in pass protection, as current offensive tackles are having trouble moving with quicker pass-rushers. Josh Conerly Jr. may be playing a ton more on passing downs than most would think this fall?

The offense needs to be balanced in all ways, and while some good running plays to the outside were accomplished, the Inside Zone, the foundation play of Chip Kelly, Mark Helfrich, Willie Taggart and even Mario Cristobal was zip in this spring game. I have been silent as everyone has been stating how great this offensive line is going to be in 2022, but do the current offensive linemen fit the new offense? (Conerly is not like offensive linemen recruited to Oregon the past four years for a reason. And remember you read it here first)

When Dont’e Thornton has two touchdowns in just three receptions–does it make sense to target him more often? He had crazy stats like that last year, but was largely ignored. Noah Whittington, No. 22, found it tough running inside.

Hits for the New Defense:

You could feel the energy building through the game, and the pass rushers were so dominant after the first quarter and really held down the scoring. My sense is that, like the offense….when the players are not split into two teams–things will coalesce so much better. It just that with this defense–it feels like there is a massive upside that is perhaps greater than the offense? The sacks, the hurries, the ball-hawking picks all shout great times for this defense in 2022 considering all the experienced players returning.

I love Jordan Kent as a sportscaster, but stating that Cam Lewis is “rock-solid” on a day where he went 1-3 with no wind or rain? I wish we kept the “Mustache-Man” as I think Lewis has consistency issues, but the coaches know best! More tomorrow, and we have tons to discuss over the next four months as…