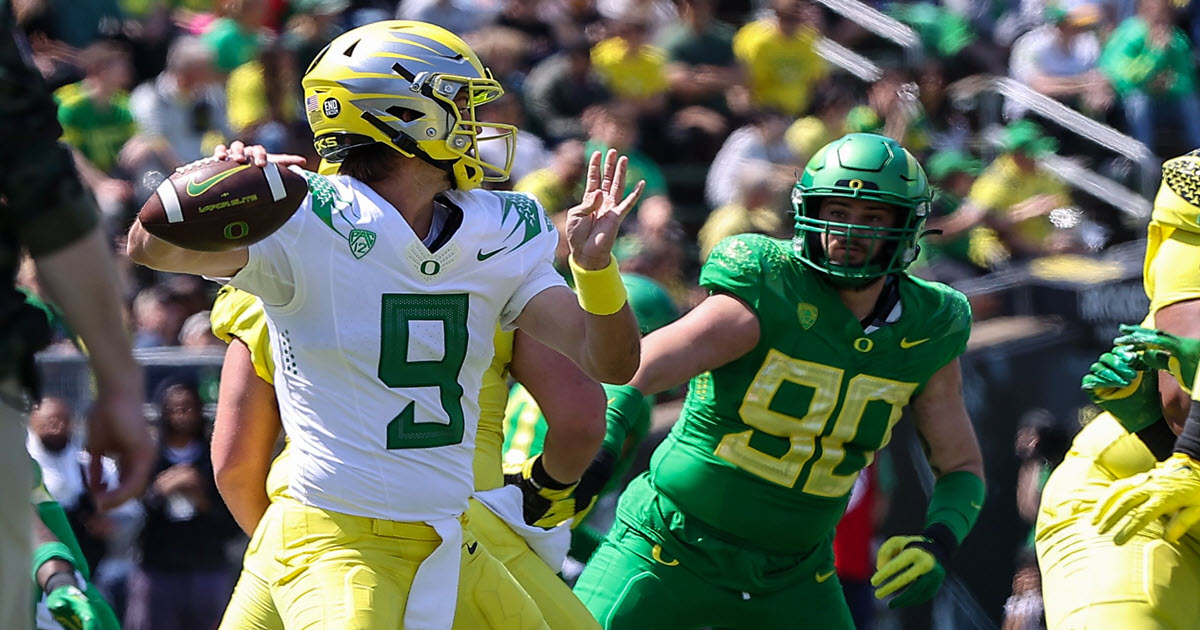 Will Jay Butterfield be a fit for new Oregon Ducks offensive coordinator Kenny Dillingham’s zone-read offense? Probably. As a pro-style quarterback he will need to make some adjustments, but with Auburn transfer Bo Nix slated to start this season at quarterback he will have plenty of time to learn the offense.

When recruited to Oregon, Butterfield was the No. 5 pro-style quarterback and No. 12 player in the state of California, according to Rivals.com. As a junior at Liberty High School, Butterfield led Liberty to the state championship while passing for 3,294 yards, 43 touchdowns and 11 interceptions. He passed for over 200 yards 11 times and 300 yards three times in his championship season. He also threw five touchdowns in a game — twice.

Butterfield is the purest passer of all the quarterbacks on Oregon’s roster, as he throws with excellent touch on his passes, and can make the anticipation throws. He also has a high IQ — his father, Mark Butterfield, played quarterback for Stanford and the Chicago Bears, and was an assistant coach at Liberty when Jay went to school there. While Jay is not the most agile quarterback, he can move adequately and shows good pocket awareness.

Butterfield is getting a handle on the new Oregon offense. In the spring game this year on the second team, he went 16 for 26, with 213 yards, one touchdown and one interception. The Brentwood native showed poise and command of the new offense, but he must continue improving his footwork and escapability to reach his potential at Oregon.

At 6-6 and 202 pounds, Butterfield must also get bigger. “Try to get a little bigger, stronger and faster,” he said. “I trust myself enough to make all the throws. Want to get that timing down with the receivers, but my biggest thing is moving my feet in the pocket and getting a little more stronger and faster.”

Butterfield may not start this year, but he should soon get his turn, as a year under Nix and learning the new offense will do him some good. The redshirt freshman will need to fine-tune some things, but he should thrive once he is ready to take the helm.

If the spring game indicated what the Oregon offense wants to do, it could fit Butterfield just right. The Ducks took many shots down the field, which could be right up his alley in years to come.

LaMarr Fields grew up in the Bay Area and now lives in Auburn, California. He is an avid sports fan that has been writing for over four years now. Some of the teams he enjoys following are the Las Vegas Raiders, Los Angeles Lakers, San Francisco Giants, and the Oregon Ducks.

He played football and baseball in high school and is very passionate about writing and wants to be a sports writer full-time someday.