Would a loss to BYU be the end of the world for Our Beloved Ducks in the 2022 season?

No. But how the Ducks fare against the Cougars tomorrow should boost our expectations for the year in a big way. Just two weeks ago, Oregon contended for a top-12 ranking in the nation. Now it’s time to get back up there. Tomorrow, the Ducks have the opportunity to rekindle some of that energy and climb back up the rankings fast.

I don’t believe these are lofty expectations, but necessary ones. This team has a ton of talent and it’s fair to expect as much of a highly-touted roster. Make no mistake about it, this is a program that needs to prove something quickly, which in essence means jumping from good to great as a football team under an exciting new coaching regime. Here are some of the key momentum shifts I expect to see carry over from last week into this crucial matchup against BYU.

Predictions for the Oregon Ducks’ Offense Against the Cougars Nix looked better, but I still expect more. He has a great opportunity against a much better team to prove his role.

We saw some strong play from Nix against Eastern Washington, and also some weaker plays. He’s still throwing into coverage, but was able to get away with it against a lesser Eastern Washington team. EWU’s defense pales in comparison to BYU’s stout front. After four sacks last week, the Cougars are coming off a big-time win in overtime against the Baylor Bears, which Oregon shouldn’t take lightly. Baylor’s become a good football team, and after some reinvigoration in the recruiting department from Matt Rhule in the past, they were no easy out in LaVell Edwards Stadium.

Oregon has to come out and not only pound the rock, but win through the air. I like our offensive line’s chances against a strong Cougar front, and I believe we’ll set the tone early on the ground to give Nix a better chance in the intermediate passing range. This means we should have a big day ahead from a pair of emerging stars, particularly Troy Franklin.

Franklin has been a rising star in this offense and could become Nix’s go-to guy. Also, he showed some savvy awareness to run off DBs in the run game last week, giving Mar’Keise Irving some great running lanes in the opening half. I would love to see more of his skillset on display tomorrow working opposite Dont’e Thornton on the boundary.

However, Nix cannot get rattled if that’s going to happen. At home, BYU can be a really tough team in terms of crowd noise. Luckily, we’re in Autzen this week, so that should be a non-factor. See Franklin getting some solid production early to get Nix going through the air. What a DAY for the tight end room last week! Let’s see some more of them tomorrow.

We saw a ton of great red zone play (and a bit of good luck for Terrance Ferguson on the tip drill) from our tight end room against Eastern Washington. I want to see that play continue into the weekend against BYU. Let our big-bodies mismatch against Cougar defenders and have a huge role in the offense.

Hopefully, we also see a bit more precision from Nix. While I like seeing Ferguson make the most out of a play that could have easily been an interception, Nix has to step up his game and give those big guys better chances. Let’s see him do just that tomorrow.

We were expecting huge things from McGee coming into this season. Apart from the one hurdle early against Eastern Washington (which ended up in a loss of yardage, by the way), he’s been virtually a non-factor in Dan Lanning and Kenny Dillingham’s offense. All sorts of touches have been distributed through the backfield and into the passing game, but McGee was nowhere to be found the past two weeks.

I expect that to change now. We’re going to have to get creative if we’re going to beat this team, and it’s time McGee makes his presence felt. Would love to see him produce in the quick passing game out of the slot.

Defensive Expectations for the Ducks DJ Johnson and co. NEED to step up this week.

If anyone’s going to the game, BE LOUD! The pass rush is going to need you. While it isn’t a considerably high figure to begin with, our pass rush absolutely needs to get home and jumpstart the two total sacks they have on the season. Whether that means dialing up some extra pressure or just running a straight four-man rush, we need to knock Jaren Hall on his tail this weekend.

To me, Oregon’s season in essence depends on how effective the defense can become, and that hinges on whether or not we have a stable pass rush. I like the energy of Justin Flowe and Noah Sewell as leaders, but the front is going to need to produce. What I really liked against Eastern Washington was the tackling improvement, so let’s hope to see some more of that tomorrow in the backfield a bit more often. 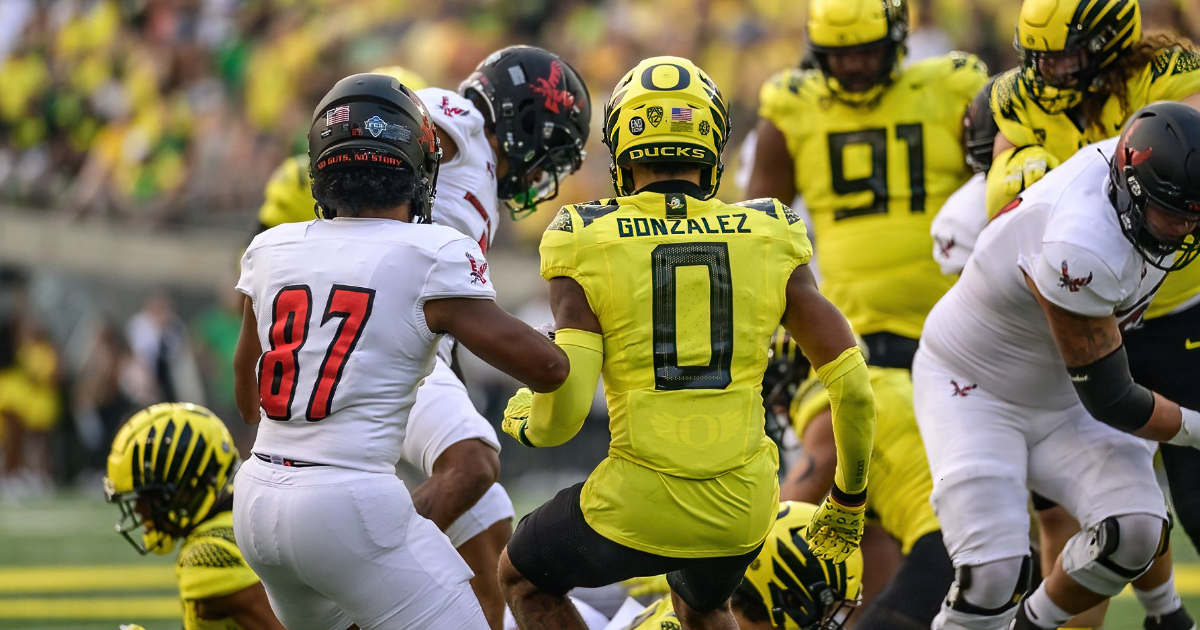 Secondary Builds on Their Momentum

Playing in the secondary (particularly, at cornerback) is almost a “streaky” position. You can go cold for a pair of outings where you’re barely targeted and then fly into a game where you’re getting targeted left and right. Last week, the secondary was able to get some interceptions to build on, and we absolutely need to keep that streak going. Neither Baylor or BYU turned the ball over in their matchup, and neither team threw for 300 yards. The game was close the whole way home, so if Oregon can get out to an early lead, I like our chances of forcing a mistake while the Cougars play catchup.

Overall, this is the game I’ll be weighing my early-season hopes on. It won’t necessarily elevate Oregon back to elite contention for the rest of the year, but it’s a great opportunity for the team to grow and really show what we’re made of up in Autzen.

What do you think? Is this a season-defining matchup for the Ducks? Is Franklin the new top wideout, or will someone else step up? How do you think Nix will play? Who steps up on defense against the Cougars?