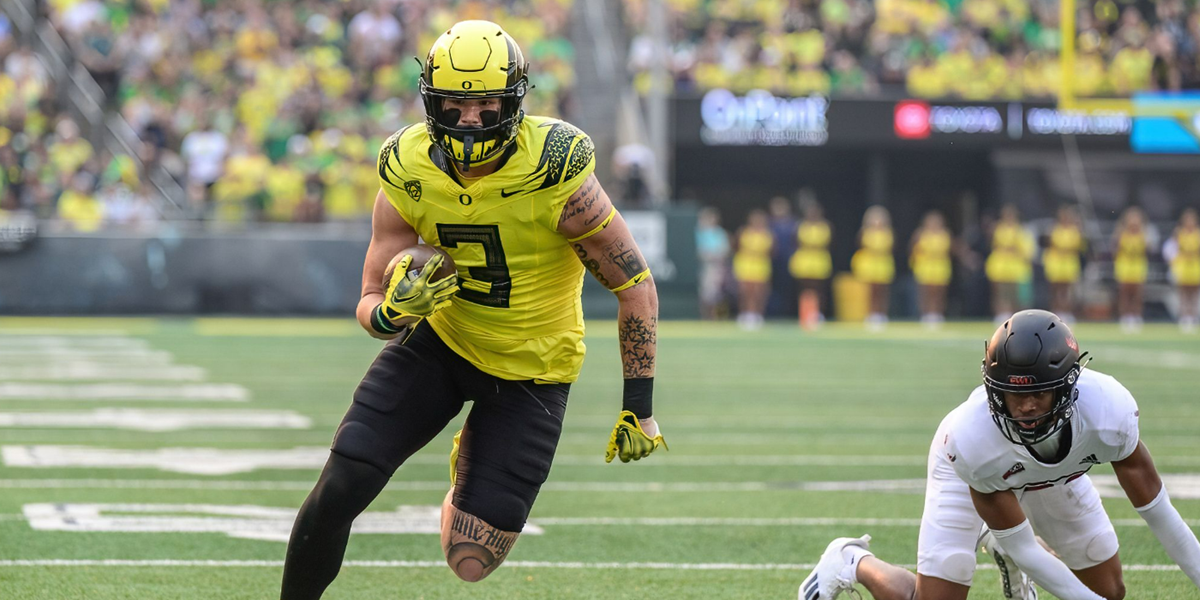 What a difference a week makes.

Just seven days removed from a rough showing against Georgia to open the season, the Ducks bounced back in a big way. Sure, Oregon’s Week Two opponent was a sizeable step down in competition. But still, the Ducks looked like a completely different team than the lifeless, seemingly overmatched squad that took the field in Atlanta.

The biggest takeaway from Oregon’s 70-14 shellacking of Eastern Washington was the Ducks’ prolific offensive performance. Although the Eagles weren’t expected to put up too much resistance, it was certainly very impressive the way Oregon was so effortlessly able to move the ball and put up over 600 yards of offense.

Fans have been hoping for some sort of shift offensively after many less-than-stellar units under Mario Cristobal, and things weren’t looking so great after a putrid debut. But another week in and it’s clear to see that this version of the Oregon offense has elite potential.

Cristobal’s offenses had a number of different looks during his time at Oregon. But the prevailing theme with all of them was a heavy emphasis on the run game. Many successful offenses are ground-heavy, but every successful unit has to have the ability to pass the ball if necessary. Cristobal’s rarely had that capability, and it led to his offenses often being predictable and easily stymied.

New offensive coordinator Kenny Dillingham seems to have a much more balanced approach, and that is essential in today’s game. It’s too easy for talented defenses to load up the box and dare teams to throw. To be an elite offense, Oregon has to have a potent passing attack, or at least the threat of one.
————————————————————-
Want to read all the Oregon Sports Articles in one place? Check out our new FishDuck Feed for Oregon Sports News and Articles aggregated every day for Duck fans and it is free. Over 50 articles curated in one day recently!
————————————————————-
The Ducks still run the ball a fair amount, and Dillingham uses a good mix of counters and zone runs to keep defenses guessing. But unlike Cristobal, Dillingham also prioritizes the passing game, recognizing that he needs one that works in tandem with his running game. Against the Eagles, the Ducks actually passed for more yards than they ran for, and they attempted nearly as many passes as they did runs — something that rarely happened under Cristobal. Bo Nix was much improved against Eastern Washington.

It’s clear that Dillingham’s goal is to mix things up and avoid being predictable. Even in the passing game, the Ducks ran a variety of plays, from swing passes and screens, to play-action passes, to intermediate, drop-back passes.

On top of the run-pass ratio, the execution of the passing game was top notch. Bo Nix looked far more comfortable than he did a week ago. He played really well within the system, improvising when he had to and playing on schedule, otherwise. He was a point guard, running the offense at a super high level, throwing for nearly 300 yards and five scores.

With a comfortable, confident quarterback and an offense that has a variety of ways to attack defenses, this year’s version of the Oregon offense seems to be an upgrade from recent iterations.

Of course, we will learn more about the capability of the unit when it faces stiffer competition, and I know the taste of Oregon’s Week One stinker is still in everyone’s mouth. But so far, it looks like Dillingham and company are making the necessary changes to get the Ducks’ offense flying higher than it has in years.