Longtime Los Angeles Dodgers announcer Vin Scully famously said, “Losing feels worse than winning feels good.” And for the past seven weeks, the No. 10 Oregon Ducks (6-1, 4-0) have worked hard not to feel the sting of defeat that struck so swiftly in their season-opening loss to the reigning national champion Georgia Bulldogs. But Oregon isn’t merely avoiding a loss each week. The Ducks are showing everyone they are the West Coast corps d’elite and one of the best teams in the country.

So, when ESPN Gameday brought the national spotlight to Eugene on Saturday afternoon for a Pac-12 showdown, Oregon stole the show and created more distance from that Week 1 stitch in a 45-30 win over No. 9 UCLA, handing the Bruins (6-1, 3-1) their first loss of the season.

…Broadcaster Lee Corso chose wisely this weekend by donning the Ducks mascot head ahead of Saturday’s marquee matchup. The Ducks improve to 16-10 overall and 4-1 against UCLA when featured on Gameday. In 1998, Oregon lost to the No. 12 Bruins in overtime 41-38 in the Ducks’ first appearance on the iconic college football television show. Last year, Corso picked the Bruins to upset the No. 22 Ducks but Oregon proved him wrong in a 34-31 win. In the Ducks’ 26 total appearances on Gameday, Corso has picked the Ducks to win 20 times — only six of those were losing picks. 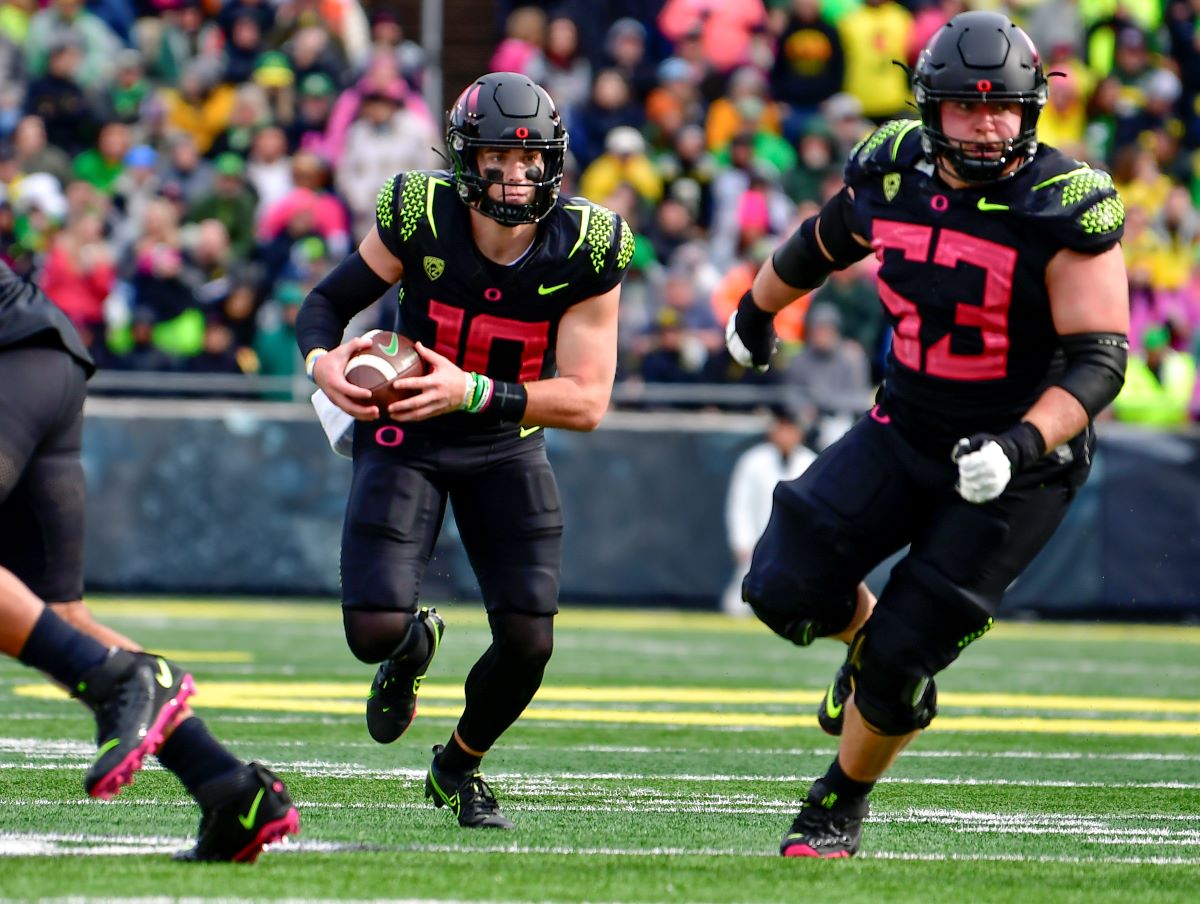 Oregon QB Bo Nix continues to beat opposing defenses on the ground and in the air.

…UCLA head coach Chip Kelly has yet to defeat his former team at Autzen Stadium and the Bruins haven’t won in Eugene in nearly two decades (2004). After Saturday’s decisive win, the Ducks have now won 23 games straight at home, tying the program record. It never rains, baby…

…Oregon and UCLA are the two best rushing teams in the Pac-12. Heading into the game, Oregon has averaged 241.6 yards rushing per game and UCLA close behind at 211.5 rushing yards. Both teams’ rushing defenses have been incredibly effective as well. The Ducks have allowed just 98 yards on the ground per game and UCLA just 99 yards. The Ducks were better than average on Saturday against the Bruins, tallying 262 rushing yards. The Bruins beat their season average on the ground with 182 rushing yards.

…The crowd at Autzen was 59,962, the fourth-largest crowd in the stadium’s history, according to UO. These kinds of crowds harken back to the days when Kelly was at the helm of one of the nation’s most exciting teams. Oregon head coach Dan Lanning has reinvigorated the Oregon fanbase, bringing an electric energy back to Eugene. And the crowd is loving every second of it. 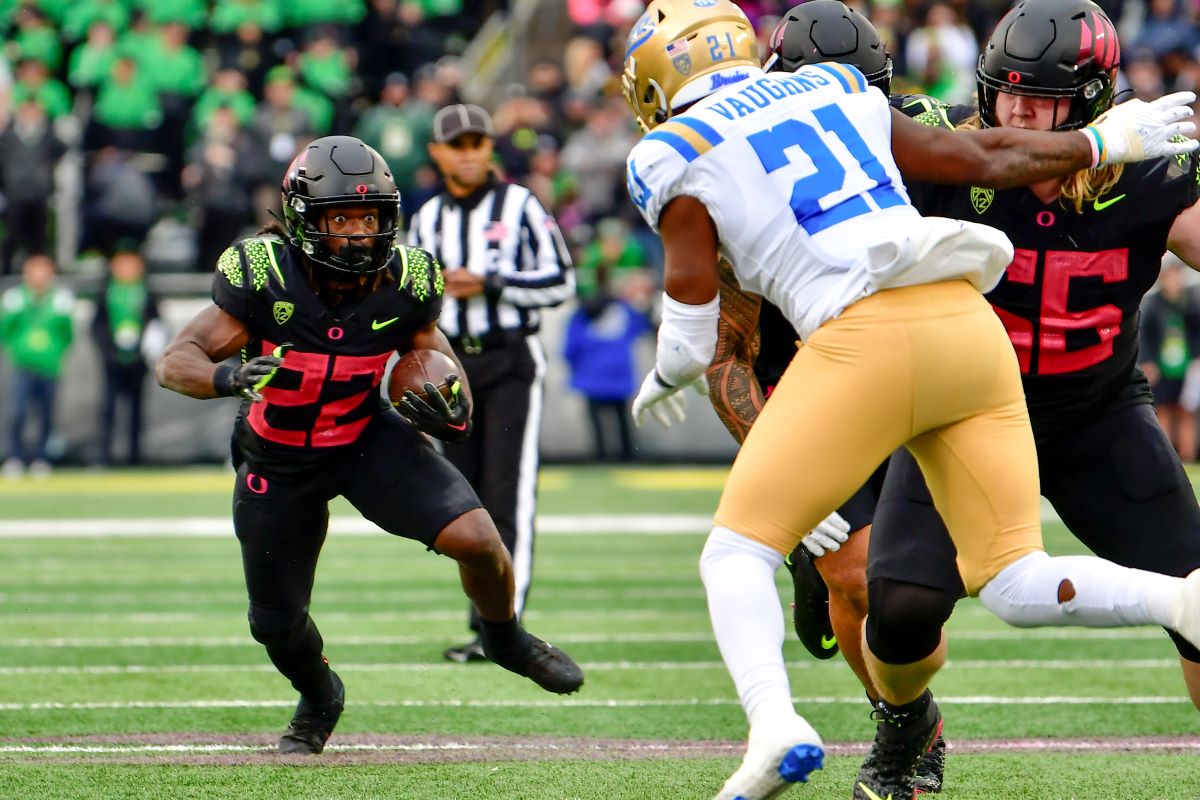 Noah Whittington rushed for 73 yards on 12 carries in Oregon’s 45-30 victory over UCLA.

…Ducks QB Bo Nix has done it again. Nobody’s still on the fence about this guy, right? Nix went 22-of-28 passing for 283 yards and five touchdowns to become just the third Oregon quarterback (Justin Herbert, Marcus Mariota) since the mid-1990s to throw 5-plus touchdowns multiple times in a season (Nix threw for five touchdowns earlier this season against Eastern Washington). Reunited with offensive coordinator Kenny Dillingham, Nix has vaulted into a new class of quarterback, throwing for 1,807 yards and 17 touchdowns with a 71% completion rate on the season. Last night’s performance should easily put him in the Heisman conversation.

…Oregon’s offensive line gets another gold star after notching its sixth game without a sack, allowing just one (questionable) sack so far this year. According to Football Outsiders*, the Ducks offensive line is ranked No. 1 among 130 FBS schools in sack rate (0%) and standard downs sack rate (0%). What does that mean? Nix has better protection than a U.S. president. Troy Franklin makes a 49-yard touchdown catch on Saturday against the No. 9 UCLA Bruins.

…Ducks WR Troy Franklin was an absolute ballhawk with 8 catches for 132 yards and two touchdowns, including a 49-yard teardrop from Nix to give Oregon a 17-10 lead over the Bruins in the second quarter. On the ground, RB Bucky Irving ran for 107 yards on 19 carries.