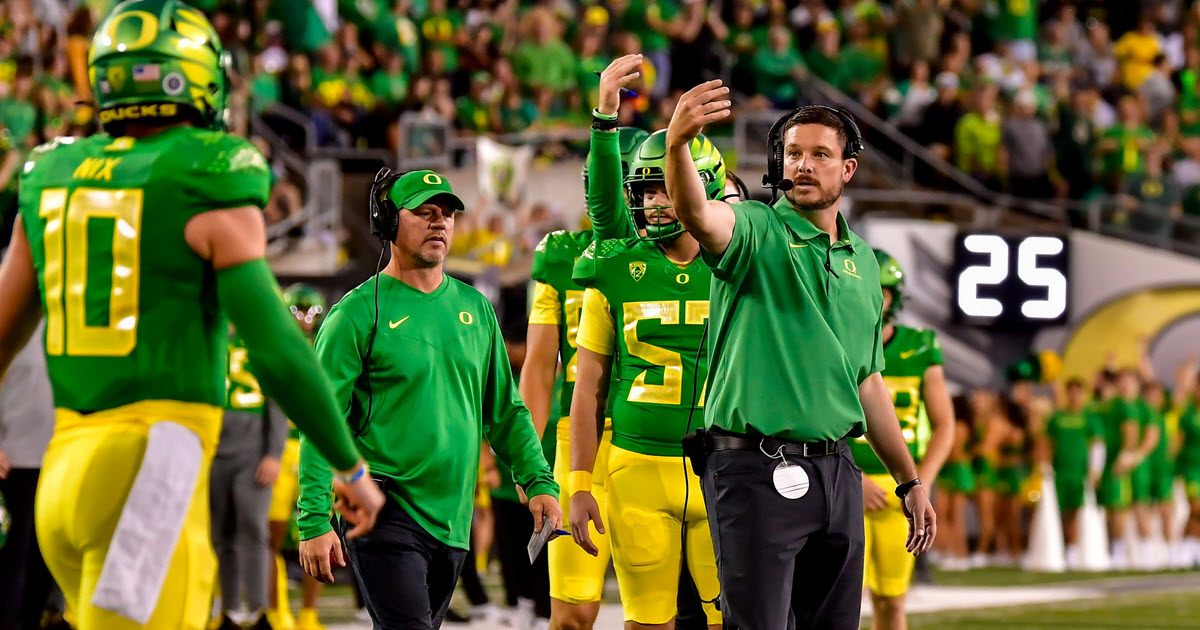 We haven’t seen an official announcement or media introduction yet, but it appears that Dan Lanning has hired Chris Hampton to replace Matt Powledge, who left to become the DC at Baylor. Hampton’s twitter bio states that he is Oregon’s Co-Defensive Coordinator and Safeties coach, and there are tweets that show he is out on the recruiting trail, which is something that only staff members who have completed compliance training are able to do. Hampton is clearly on Oregon’s staff despite the silence around his hire.

This is the first step in fixing a major problem for Oregon last season when it came to the defense, the play calling. I pulled Mr. FishDuck away from Maryland sportsbooks long enough for him to agree that he too found the new hiring suspicious, and it begs many questions.

Last season it wasn’t terribly clear who was actually calling plays, though most of the media and fans pointed to Co-Defensive Coordinator Tosh Lupoi. In many regards this would make sense because Lupoi is the highest-paid member on staff, after Lanning, and was the one signaling the plays from the sideline last season. For all intents and purposes, Lupoi was the face of the defense — for better or worse.

Powledge was in the box and was in constant communication with Lupoi and Lanning on the sideline. It was certainly possible that Powledge was the one calling in the plays, especially since he had the best view of the field. Then after a few of Oregon’s best defensive performances of the year, in particular Oregon’s victory over Utah, it even sounded like perhaps Lanning himself had taken over play calling duties.

But the fact is that we really don’t know who is calling plays and Lanning has never outright said who was the play caller. There has been vague reference to it as a team effort, which isn’t untrue as playing is always a team effort, but as fans we are really in the dark as to who is actually calling the shots. 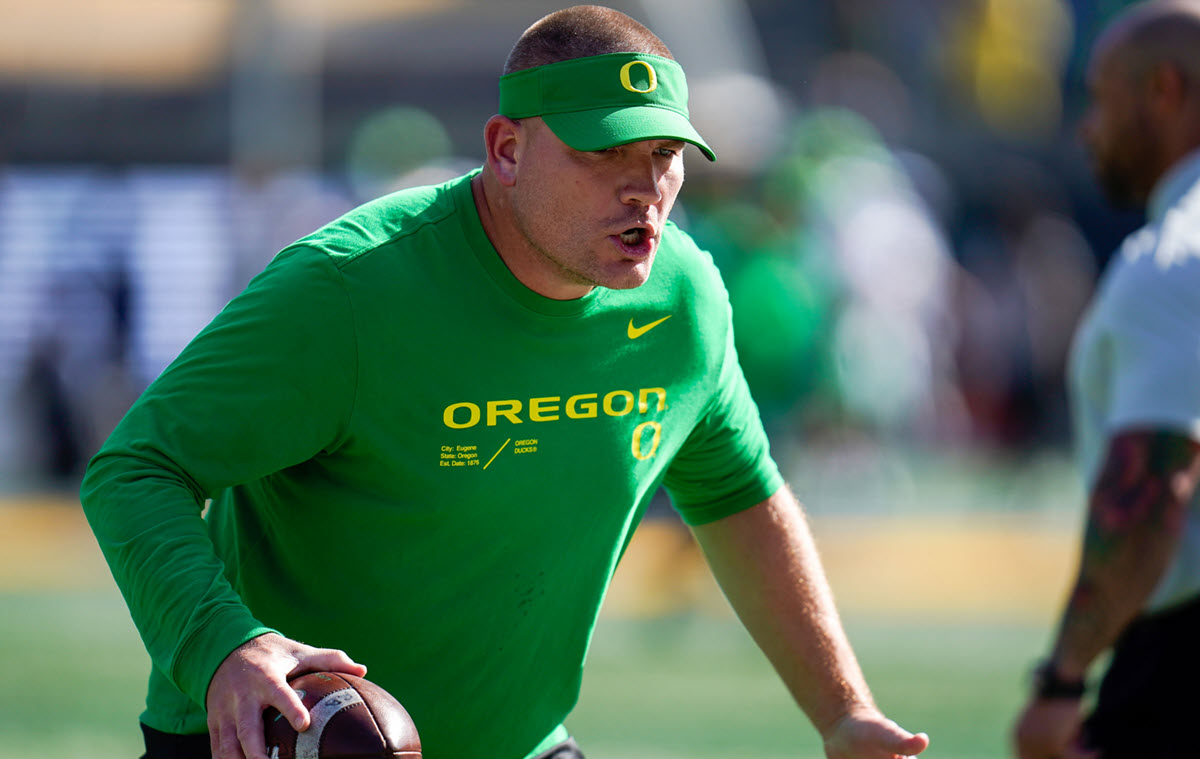 Will it be Hampton or Lupoi?

Hampton was the DC at Tulane last year and his defense was solid. Many fans will point to the Cotton Bowl game where USC put up 40+ points on Hampton’s defense, but it is important to remember that Hampton’s defensive roster was a bunch of three stars, or lower, against USC’s offense that is a mix of four and five-star recruits and they got just enough stops to allow their offense to win the game.

Hampton has a better pedigree as a defensive coordinator than Lupoi, who lost his play calling duties over the course of his year at Alabama. This isn’t to say that Lupoi that isn’t a good football coach, but calling plays is an art onto itself.

Often people like to compare play calling to chess, and having to think several moves ahead — but this leaves out some of the nuance of how football is played. Substitutions can change the entire situation just mere seconds before a snap. If we are to continue with the chess analogy, it is like having an non-threatening knight on the right side of the board and then having it switched out with a bishop that can now threaten the king, and then having to play simultaneously.

Not everyone is a good play caller, but not everyone has to be a good play caller for a team to be successful. There is a reason why Lupoi is also on the sideline and not in the box. He has one of those personalities that can energize and motivate players, and that kind of energy belongs on the sideline and not cooped up in the box. I am also sure his football knowledge is immense; he wouldn’t have been positioned as the Defensive Coordinator at Alabama if it wasn’t, nor would he have been hired at his various NFL stops or at Oregon. But maybe play calling isn’t for him — assuming that he was the one calling the plays last year.

Hampton has a better track record of being a successful play caller than Lupoi, and it wouldn’t be a surprise if Lanning brought in Hampton with the design of having him call the plays. 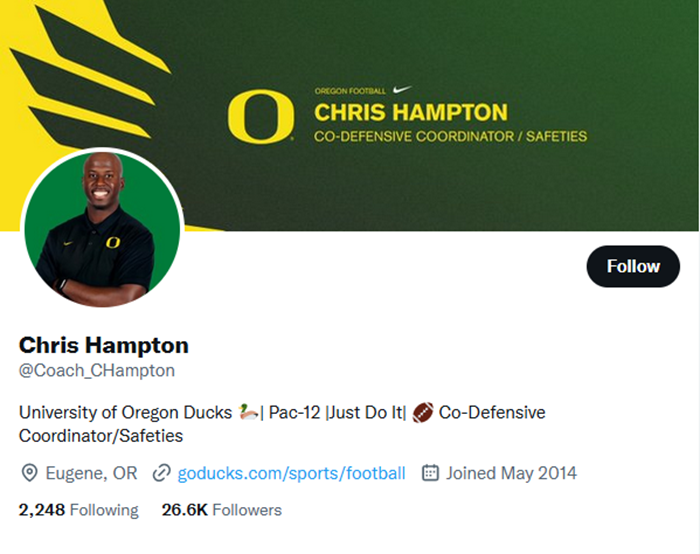 Despite no real announcement from the Ducks’ program, it looks like Hampton is officially a Duck on his Twitter profile.

Why Doesn’t Lanning Call the Plays?

This is Lanning’s defense so why isn’t he calling the plays? He certainly has a say in the play calls, but he probably doesn’t want to have full play calling responsibilities for the defense because, as the head coach, he needs to be focused on so many different aspects of the game. There is a lot that goes on behind the scenes on football staffs when their side of the ball is off the field. There are adjustments that need to be made (or should be made) between series, and analysis that can be done.

Again, Lanning is probably taking part in this a bit during the game, and more so at half time, but Lanning clearly wants to be fully engaged with what is happening on the field when the offense is in play. Having a defensive staff that can just handle these adjustments and then call the proper plays when the defense hits the field is of the utmost importance.

Regardless of who calls the plays next year, there needs to be an improvement on the field for Oregon’s defense. Who do you think should be calling the shots next season?