This next season promises to be exciting, with new plays and changes on offense, and I am going to enjoy breaking it down.  Why do I think we will have major changes?  Most have not noticed that inside of the last two games and the Spring Game of last year—we had FOUR new formations introduced with a slew of different plays that went with them. (Triple Tailback Threat, Slash Formation Series, Dual H-Back Series, and the Ace Formation Series)

That is introducing a TON to the offense, along with further evidence of Chip giving the offense a playbook with TWO HUNDRED plays instead of the usual seventy five this fall.

We call those “clues”.

Let’s take a quick look at the formations and personnel being assembled and determine the probability of us seeing these changes as permanent in the new football season.

There are times that Zone Reading inside the five yard line is difficult due to all the defenders stacked in the box, thus the “Ace” (above) makes sense.  We can continue to use our usual Zone Blocking rules for Stretch plays around the corner or for Power Plays up the middle, yet because the formation is balanced we have the advantage of loading up a side before the defense can adjust.  It is a superb formation for use inside the Red Zone and for burning up the clock at the end of the game.  FishDuck probability of use?  A certainty: 100% 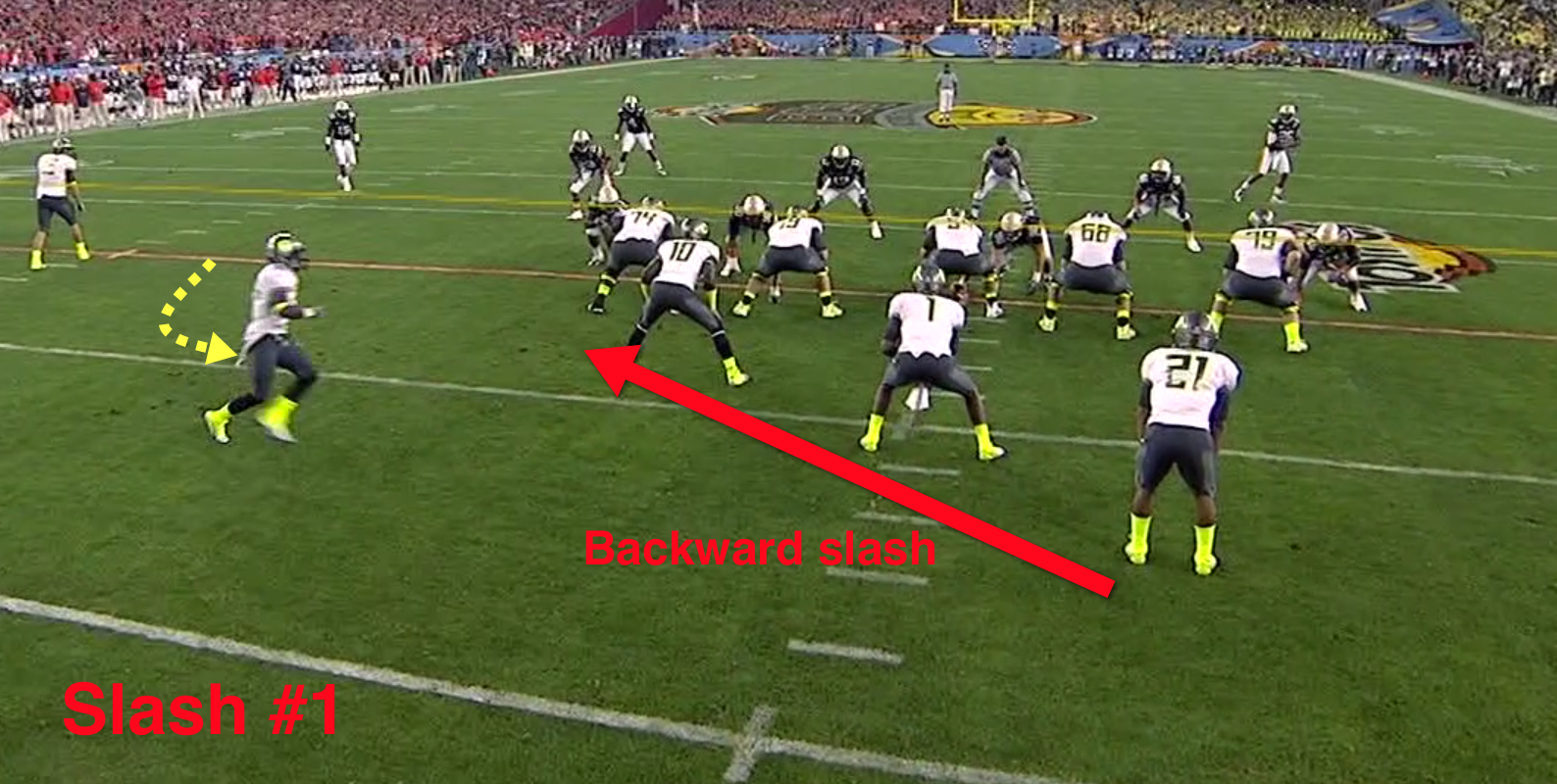 Changes to the offense compound assignment problems for defensive coordinators.  The new Slash Formation (above) has a set of plays that allow us to run triple option-all three to playside.  (And yes, like a Veer)  It also has some interesting variations that allow us to use a “slash-back” like a lead fullback, and yet we can attack both directions for Zone Reading.  The positive is how it can trip up a defense prepared for our usual attack, while the negative is learning the plays and timing for effectively a new offense.  FishDuck probability of use?  One in three is all. 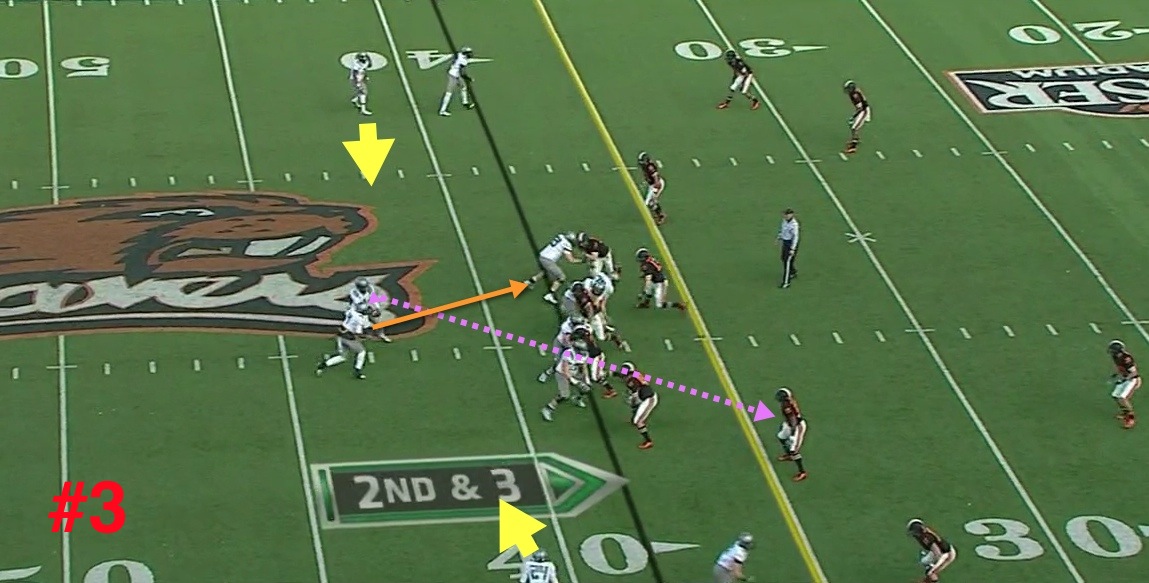 This formation, (Triple Tailback Threat) to me seems to be the simplest, yet most intriguing of all the new formations.  It is spreading the defense at an extreme which opens up running lanes in the middle of the field, while creating opportunities for our most talented RBs to have a one-on-one situation on the perimeter against a Free Safety.  Put one of the nation’s best RBs in LMJ behind the QB to threaten the front seven of the defense, and then flank Barner, Huff, or DeAnthony Thomas on the side?  That is Tums-Time for defensive coordinators!  FishDuck probability of use?  Three out of four. This formation, (Dual H-Back) was a shoo-in for expected use before all the injuries to our tight ends, yet I recall we used running backs often in the “H-Back” positions and did well throwing to them, or handing off.  If Carson can be brought up to speed for a few plays, then his size is ready-made as an H-Back.  I love the thought of French and Lyerla getting reps through this formation as it creates an extra playside blocker with the H-Back, as opposed to the pulling guard or Zone Reading.  We can run Option/Zone Read plays as well as a series of pass plays out of it.  Give us another two healthy TEs, and it’s a slam-dunk.  FishDuck probability of use?  50/50. I believe we will see changes based upon personnel as well as formations.  Chip knows we have to become more balanced and has brought in perhaps the finest WR group in one class ever at Oregon.  Normally it is ludicrous to assume major changes with a JC and some freshmen, but I stated last year that we only needed ONE WR to emerge and Huff did big-time.  This year we have returnees in Huff, Tuinei, and I think one of the greatest blocking TEs with Maehl-like hands in Paulson.  We have three steady performers and I believe that one of the four newbies will step up and provide that last weapon needed.

The final frontier for the Chip Kelly Spread Offense is the vertical game; we have not had a long-ball burner since Paysinger got hurt in ’07.  If one surfaces and stretches the defense longer, then the mid-routes and running game will have even larger gaps to run through.  This needs to happen; I WANT this to happen, and I think Chip does too.  FishDuck probability of a deeper passing attack?  Two out of three.

This will be a perfect season to be learning about the offense and looking for the new wrinkles.  Join me with your comments in The FishBowl, and let me know YOUR probabilities!