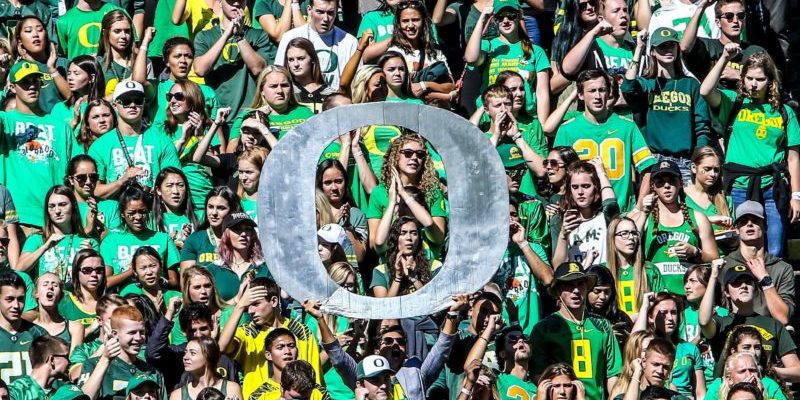 Chip Kelly may be the next Pete Carroll. And by that I mean he will likely be fired soon from the pro ranks. Carroll failed to impress during his first at-bat (6-10, NY Jets, 1994) and boasted only slightly better success during his second attempt at the Patriot’s helm, which ended after his 8-8 finish in the 1999 season.

Fourteen years later – after capturing two titles for the Trojans and dropping a bomb on the Southern California program – Carroll won his first Super Bowl. It can be a long journey. I don’t think Kelly will turn it around this year. Whether he gets a second year in San Francisco, my foresight doesn’t have that kind of precision, but I see him back in the college ranks soon. 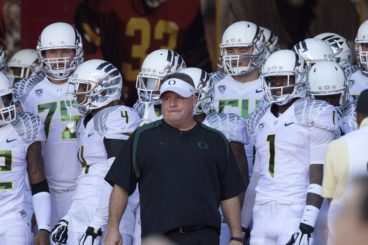 Those hoping Kelly will rescue Oregon may be disappointed.

And wouldn’t it be glorious if he rescued Oregon? I know a lot of Oregon fans hope so. Probably even pray.

It’s not impossible. Bobby Petrino returned to Louisville. That should give us hope. Yet Kelly, if anything, is a good poker player. We won’t know his next play until it’s underway. Maybe he carries a torch for Oregon. Maybe he misses the once-humble institution that vaulted him onto the national scene.

Maybe. But I doubt that alone would be enough.

I suspect two things motivate Kelly like no other: money and ego. But: (a) that’s not much of a criticism these days, and (b) he’s an outstanding (college) coach.

Should Kelly return to the college ranks, Oregon absolutely should leverage its future to get him back. But I see him going to USC. I suspect Kelly would gladly become a pariah in Oregon for that coaching trophy. Carroll was pulling down $4M plus at the end the last decade – then tops in the NCAA. Given that that same statua is now north of $7M, it’s not impossible that Kelly could get a program such as USC close to matching his current $6M base.

Can Oregon compete? Probably. Will it? I don’t know. It would require a buy-out of Mark Helfrich’s contract. As of February 1, 2017, that will be $11M and change.

The way I have it, USC will be motivated to recapture its storied-past and fix its coaching mess at the end of this season. Kelly will likely know before anyone else when he will need a new job. The problem? Well, Oregon may be looking for a coach. We just don’t know. Rob Mullens threw his full support behind the status quo because “there still is an opportunity to turn this a little bit.” That’s the new hope for Oregon. From “title contention” to “maybe-we-don’t-end-up-2-and-10” in 2-½ seasons.

Call me irrational, but if Helfrich doesn’t turn more than a little, Mullens needs a new coach.

Icebergs can take down titans if they don’t change course. Oregon will fare no better if it doesn’t start the turn now.

So if not Kelly, then who? First, no matter what candidates the “Change-Course-Now” crowd advances, a chorus of objections will follow from those who found the handle long ago providing a detailed analysis of Oregon’s navigational errors to date, explain why it’s not Helfrich’s fault and conclude that maybe, mind you only maybe, the Captain can turn the ship before he broadsides the giant iceberg that is now plainly visible.

For my part, albeit over the objection of those who think we have to hit the iceberg before we consider changing course over the coming weeks, I’m going to start looking at the menu.

Les Miles is not a real candidate for Oregon but his absence at the LSU Tigers’ helm is relevant because we’re not the only program that will be in market for a championship coach. It’s not often that a likeable, clean-cut, National Championship coach gets let go due to strategic coaching disagreement. His sin? Resisting modernity. Apparently he hates spread and tempo. For our purposes, his dismissal means an SEC purse is looking for someone to bring a modern spread offense to Baton Rouge. Baylor University witnessed an alarming number of violent crimes and did little about them.

Which leads me to Art Briles. Publicly courting Briles would likely go over on most camps these days as well as suggesting Steve Sarkisian for athletic director. Nevertheless, I submit that the potential rare opportunity to land Briles merits attention.

So let’s examine the Baylor University sex crimes scandal head-on to see if there is a reason why he should be off-limits.

A priori, none of this is a defense to criminal conduct. By my count, this scandal involves seven former Baylor football players. Two have been convicted of felony sex crimes. No one – not football stars, and certainly not their coaches – gets a pass for moral failures or violence.

While the criminal conduct of football players notably brought this scandal into focus, it is not a football scandal. The investigations, criminal and civil, place the focus on Baylor University itself. It is not limited to the football program. It’s not limited to Baylor’s athletic department.

A fraternity president, a tennis player, a philosophy major and other “regular” students, have been accused of violent sex crimes on and off campus. The scandal is the University’s systematic failure to respond to victims’ complaints. 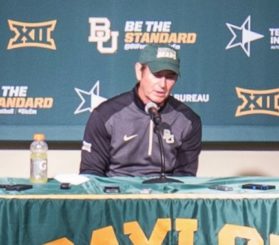 Coach Briles may have gotten more than he bargained for when he moved to Waco from Houston.

So to the defense of Briles’ candidacy, we start by pointing out that Professor Kenneth Starr, who resigned as University President in the wake of Pepper Hamilton, LLP’s recommendations following its private Title IX investigation, was responsible for retaining that firm’s Philadelphia office to investigate the University’s response to student complaints.

Notably, while Hamilton specifically noted improprieties in the football program, prior to Starr’s or Brile’s tenure and concluded that the failure was institutional and, I would submit therefore, more appropriately laid at the foot of the President than anyone else.

For example, not having a Title IX Coordinator at all until after a football player was sentenced to 20 years for rape. Professor Starr, however, kept his teaching post and, presumably, is free to carry on coaching legal scholars in any one of the nation’s law schools should he see fit to move. Joseph Heller wouldn’t be shocked by much. If you haven’t read Catch-22, you should.

And even with that limitation, the results, more often than not, would make Joseph Heller scratch his head. That is to say, to a man with a hammer, everything looks like a nail. Even given my predisposition, the attorneys who handled the Baylor investigation are the real deal.

Former prosecutors generally don’t get distracted by tall tales but, and this is important, they also have no problem identifying the line between institutional failures and criminal offenses.

That is important because Baylor hired two former sex crime prosecutors who found that Baylor, as an institution, failed to assist victims, ignored the required response to victim complaints and improperly burdened the victims by depriving them of the resources and protection they were due.

Third, let’s therefore take everything in the report at face value and conclude that the administration at a private religious university in Waco, Texas, was wholly absent in Title IX compliance not to mention callous cultural laggards.

For his part, Briles has acknowledged his leadership mistakes. Those mistakes sadly appear all too frequent on college campi. Similar discrete failures, surely not as culturally pervasive as Waco’s, have been seen close to home. Mike Riley‘s inadequate response would likely have gone unnoticed in Corvallis had Brenda Tracy not gone public.

And right at home, too. Our own University and head basketball coach Dana Altman allegedly delayed their response to a disturbingly similar complaint. Yet Riley, who was never sued, and Altman, after a quick settlement, remain employable.

Riley has impressively set the standard for the outreach and constructive effort that correcting individual failures require. In contrast, Baylor’s was an institutional and cultural failure. It must undoubtedly be held to account for its failures and correct them. The crimes must be investigated and punished. That accountability does not mandate vicarious liability for another’s criminal conduct. Courts in Waco may inadvertently impact college football in the coming weeks.

Meaning that Briles as an individual – not as head coach – owed, or assumed, a duty to the victims of his football players and breached it. The outcome of this effort may be critical to Briles’ immediate future. The NCAA, and any institution looking for a coach, should be watching closely because it will likely dictate how quickly Briles may be reemployed elsewhere.

This variable will be resolved in a matter of weeks. Will Oregon be ready to act? Or will Mullens allow a prime prospect to slip away while he’s hoping for a little bit of a turn? Scuttlebutt has it that LSU will target Briles to replace Miles next season. Chances are, LSU is far more motivated about avoiding that iceberg.