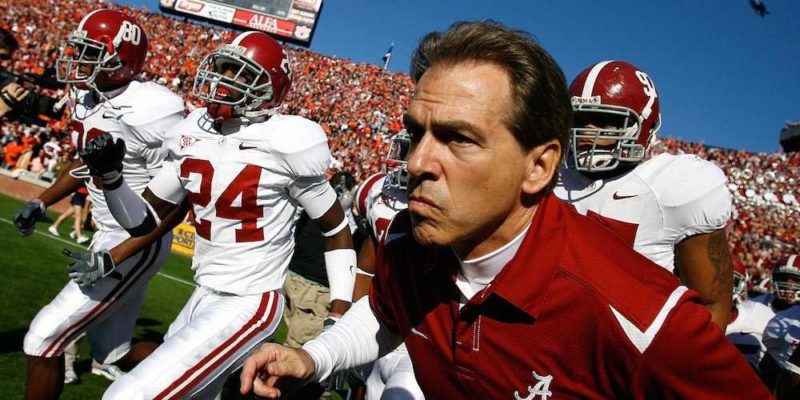 Watching this college football season play out, be it Oregon‘s collapse or the rise of teams like Washington and Nebraska, I was reminded that there have always been two ways of looking at the world.

In the west, where monotheistic religions (Christianity and Judaism) are the most common, we traditionally believe that time is linear: a one-way progression of history. In the east, however, where Buddhism and reincarnation are the primary belief systems, time is seen as being circular, with history repeating itself at regular intervals.

Like most in America or Europe, I always believed that time was linear: a progression in which we’re always moving forward. However, recent developments in college football (if not current affairs as well) have caused me to think maybe the latter is true: that the same struggles inevitably come back to haunt us again. Coach Bear Bryant on the shoulders of his players

For much of college football’s history, particularly before Proposition 48 was enacted in 1992 to limit the number of scholarships per team, a few powerhouse programs dominated, with regular positions in the Top 10, annual trips to marquee January bowls and a majority of the top recruits. You know the teams I’m talking about: Alabama, Ohio State, Notre Dame, Michigan, USC, Texas, Oklahoma, Washington, Penn State, Nebraska.

For much of the last 25 years, since the playing field was leveled, several programs without such storied histories have surpassed the traditional powers to enjoy their greatest success. Oregon is of course a leading example. In 98 seasons before 1992, the Ducks reached a marquee January bowl just four times: the 1917 and 1919 Rose Bowls, the 1949 Cotton Bowl, and the 1957 Rose Bowl. In the 34 years since 1992, Oregon has traveled to eight of them. Through all time, the team is ranked 37th in win percentage among Power-5 conference teams. In the 21st century, even with this disappointing season factored in, we’re still in the top ten. And Oregon isn’t alone, having been joined in the winners’ circle by other newly emboldened programs like Wisconsin, Kansas State, TCU, Boise State and Baylor, all of whom have been much more successful in the last quarter-century than in the deeper past (in Boise State’s case, they won but in a lesser conference). It seemed for much of the last quarter century as though the progression of college-football history was indeed linear, wherein a newly level playing field enabled greater parity and less oligarchy.

During these recent decades, some of those all-time winningest programs hardly ever left the top of the pyramid, or when they were down it wasn’t for long: Alabama, Ohio State, Oklahoma. But just as many top programs have enjoyed a decade or two with mostly mediocrity or a status of good but not great: Washington, Michigan, Nebraska, Penn State. There seemed to be a natural attrition, indicating that it wasn’t a historic reputation that garnered the best recruits but what you could offer now.

A quick look at this year’s result, though, indicates that many of these traditional empires are striking back — that history may be repeating itself. Michigan may have lost to Ohio State again this year, but the team has spent nearly the entire season in the top 5 and is headed to a New Year’s Six bowl. Nebraska under former Beavers coach Mike Riley has achieved its greatest number of wins in many years. Penn State has emerged from the shame of the Sandusky/Paterno scandal to play for the Big 10 championship. Washington has achieved its first 11-win season since 2001. USC seems to be returning to powerhouse form for the first time since Pete Carroll‘s departure. And while Texas is still not a great team, after some strong recruiting years under Charlie Strong the program seems poised to win big under Tom Herman.

In other words, the progress that non-legendary programs, like Oregon, have made in recent years seems to have come full circle. At a time when the Ducks have fired their coach for the first time in 40 years, suddenly the teams dominating the game in the ’50s, ’60s and ’70s when Oregon was an also-ran have made it back to the top again.

What’s more, some of the advantages in facilities that helped Oregon establish a new identity and attract higher caliber recruits have now evaporated. With a new generation of TV contracts being doled out to Power 5 conferences, nearly every college football team is rich enough to build palatial facilities.

This is a time, therefore, not just of crisis for the Ducks in terms of righting their own ship, but in the adversaries that must be overcome to be successful.

Oregon is embarking on a new era, one with a new regime and without the momentum that has been built since 1989, when Oregon returned to postseason play for the first time in 27 years. Despite the much appreciated benefaction of donors like Phil Knight and Pat Kilkenny, it will take more than first-class facilities to attract the All-American players to Eugene. It will take charisma, innovation, smarts and hutzpah.

If things seem dire these days, with us all dejected over only the team’s second losing season this century and a first head-coach firing since 1976, perhaps there is comfort in precisely the realization that now scares us: that time indeed is cyclical. If that’s the case, Oregon’s fall from grace was inevitable — but so is our redemption.

The Ducks may not be able to argue for having a facilities advantage anymore, or vastly greater riches than other programs. But the team is also not going to recruits hat in hand and asking them to join a program without a winning tradition.

There is still a generation of high school and junior high players out there, across America, who were too young to remember Oregon’s losing ways of the ’70s and ’80s but instead grew up watching LaMichael James, De’Anthony Thomas, Marcus Mariota, Dennis Dixon, Jonathan Stewart and TJ Ward. Particularly since 2007, when Mike Bellotti brought Chip Kelly to Eugene as offensive coordinator, Oregon has been among the most popular teams in college football, winning fans not just in Eugene and Portland but throughout the country.

A couple years ago, a New York Times study using Facebook posts as data found that nationally Oregon was often the average fan’s second favorite team after his or her own. I sometimes cringe when UO athletic department staffers or fans use the phrase “national brand” to describe Oregon’s popularity, but it really is true.

Obviously I call this piece “The Empires Strike Back” in reference to the second Star Wars movie, The Empire Strikes Back. I think of how dire things seemed at the end of that movie: Han Solo frozen in carbonite, Luke Skywalker missing a limb, the rebellion in tatters. But we all know what happened in the next movie, Return of the Jedi: the Empire was wiped out, even Darth Vader and Emperor Palpatine. With a new Star Wars trilogy begun last year, we now know that the Empire re-asserted itself a generation after the events in Return of the Jedi. But that’s all the greater reminder of this circular struggle we are engaged in over time. Ducks will be back to doing this again…

In other words, there will always be villains threatening our success, or even our very existence. But even when we’re down, our time is always coming. Let’s hope we’re not in for another multi-decade bowl drought, like the one between 1963 and 1989. Let’s hope we’re not destined for a decade of lower-tier bowls, either: the ones that invite 6-6 teams caught in a limbo of mediocrity. But let us also go forward with the confidence of a champion, one befitting a program that was the winningest in college football for the first half of this decade.

Oregon in the 20th century was a mediocre program that only occasionally reached beyond to achieve greatness. Oregon in the 21st century is a giant that we have every reason to believe will soon regain its place among the elite. It’s been jarring and painful this year to see the momentum of recent years lost and our coach fired. But that’s all the more reason to remind ourselves that Oregon is poised to be great again: not to rebuild but to re-load.