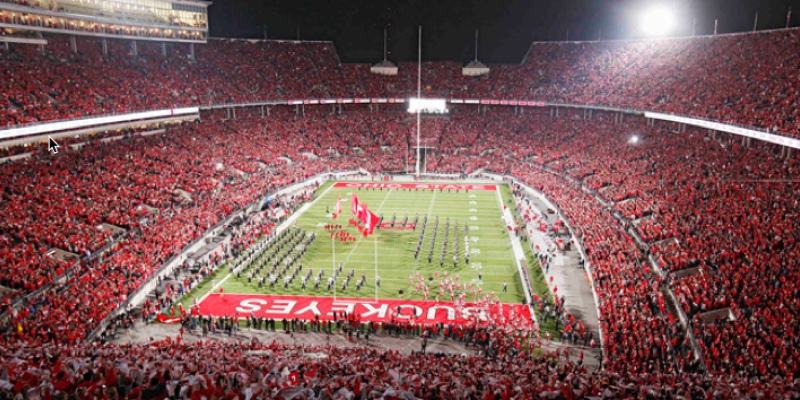 Three years of college football playoffs have clarified the team selection criteria. The most heavily weighted variable, aside from won-loss record,  seems to be strength of schedule.

The 2017 College Football Playoff committee looks favorably on those who challenge themselves out-of-conference even more than it values a conference championship. Recognizing that schools have no discretion in their league schedules, the only sure way to improve ones strength of schedule is to play tough out-of-conference Power Five opponents.

Nowhere was this more apparent than in 2014, when Oregon’s victory over highly ranked Michigan State offset an abysmal performance at Arizona.

This example, along with others not involving the Ducks, supports the premise that a good win counts more than a bad loss. Unless one expects to navigate its conference schedule unscathed, then it is incumbent on the athletic director to arrange at least one winnable out-of-conference game per season against a team that will likely be ranked after Thanksgiving.

My recent conversation with Deputy Athletic Director, Eric Roedl, convinced me that this is no easy task.

On Sept. 9, 2028 the Ducks will host Baylor. Although it may be premature to mark your calendar, let alone head for the ticket office, it is necessary to nail down desirable opponents before someone else scoops them up. Will the Baylor Bear be big in a decade?

When Texas A&M opted out of its contract with UO for games in 2018 and 2019, it became impossible to find a comparable substitute. The Ducks recovered strength of schedule-wise in 2019 by agreeing to a neutral site game versus Auburn.

But the 2018 out-of-conference slate is a cupcake fest: Bowling Green, Portland State and San Jose State. Thus far, their combined 2017 record is a stay-home-and-mow-the-lawn 2-21. The point is to plan way ahead with the Power Five or get left out in the cold.

Of course, careful planning is no guarantee. No one knows how good Oregon or Baylor will be in 2018, let alone a decade later.

There is a mind-numbing array of factors to be considered when formulating out-of-conference schedules. For financial reasons, Oregon and most other Power Five teams, want seven home games per year. The standard (but not universal) formula for schools that play nine conference games is to face one Power Five opponent, one mid-major, and one FCS. The Power Five opponent will most assuredly expect a home and home series, while the other opponents typically will not.

Although, a deal to only play a team at home requires a payout of $500,000 (e.g., Southern Utah) to $1.5 million (e.g., BYU), Roedl anticipates that the most attractive mid-majors will command upwards of $2 million before long.

Therefore, another home and home series with the Wolverines is nearly impossible to arrange. Literally half of the schools playing nine conference games (i.e., Big Ten and Big 12) are on the same timetable as the Ducks, meaning that they are unable or unwilling to travel anywhere in even-numbered years. So, then, what about the SEC and ACC who play only eight conference games? Well, it is true that their members have more out-of-conference flexibility and opportunity, but there are other constraints.

Second, traveling across three time zones is truly an impediment. It’s more expensive, there is no alumni base, the State of Oregon is not a recruiting hotbed and Autzen is an easy place to lose. Roedl claims that the current UO coaches are quite willing to travel east, but this attitude is not often reciprocated.

Oregon is an attractive fan destination in September, and this certainly helps, as does the visibility of UO’s national brand. Yet many coaches from the Northeast and Southeast prefer to play closer to home. That the ACC and SEC share the same geographic footprint makes regional out-of-conference scheduling relatively easy and cost effective.

Now that I have described obstacles to schedule strength, what counter measures can be taken? A second Power Five game could be scheduled at a neutral site offering an ample payout. The athletic department embraces this option and has exercised it in 2019, but opportunities are few, especially if the luster of Oregon’s national brand tarnishes. Also, Group of Five (mid-majors) could be selected more on the basis of strength of schedule.

Teams like Cincinnati, Boise State and Toledo have been good forever. Sure, there’s no guarantee, but when was the last time San Jose State or Hawaii had a decent muiti-year run?

Next, it is possible that out-of-conference games versus skipped Pac-12 teams could be arranged when no high-profile Power Five opponent is available. This seems improbable, but it does occur in baseball. Finally, perhaps there is a way to make the dollars work substituting a second Power Five series every year for the annual FCS game. After all, USC, UCLA, Stanford and Cal rarely or never play an FCS school. Zero FCS opponents were found on the future schedules of nine Big Ten members. Lubbock, TX: One of USA Today’s 50 worst places to live.

To illustrate, if Washington becomes a one-loss Pac-12 Champion this season, it is likely to be bypassed by the College Football Playoff committee owing to its horrible out-of-conference schedule (Rutgers, Montana, Fresno State) coupled with a relatively weak Pac-12. Other one-loss teams will surely be rated higher.

The Ducks are rolling the dice after the Ohio State series scheduled for 2020-2021. After that, the only Power Five teams on the menu so far are Texas Tech (2023-2024) and Baylor (2027-2028). Maybe they’ll be tough enough opponents to enhance strength of schedule. Maybe not. But at least Oregon fans will have a reason to visit Lubbock and Waco in late summer.