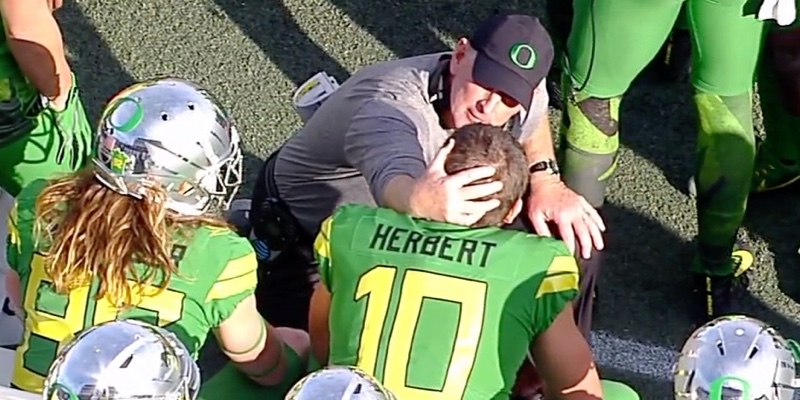 Did you recognize that Oregon team playing in the Las Vegas Bowl? Was that a scrimmage or a first game? That was such a mess that I am not doing my usual analysis after the game with slow-motion videos of plays to point out the differences in the game. Why? Because if I did, I would be showing bad plays on both sides of the ball, and I don’t want to single players out. They all did not play to their potential, and it was awful.

How could Justin Herbert be so off on key throws? Too many third down throws were behind or above the receivers, and it was uncharacteristic of him. What happened to Charles Nelson making an impact in his final game? I wrote that this group of receivers was the worst going into the season opener in 30+ years of watching the Ducks–and the progress of this group was the least of any I’ve seen over an Oregon season as well. How can the offensive line run-block so well on Washington,–when the Huskies know it is coming–and the Ducks can’t block Boise State? How could the Broncos run right up-the-gut on the Oregon defense so often it became embarrassing? The truth is, that Oregon got beat badly in the trenches at Sam Boyd Stadium, and a point of emphasis by our new coach seemed to be ignored by the team.

The amount of penalties was just plain dumb and undisciplined. I don’t know if players have been so coddled that they feel they have the freedom to make those mistakes with no consequences, or if their judgment is really that poor.

I wrote a recent article about the exciting potential of recruiting for the next two months, but what does it matter if they are not being coached up well? My point is that Oregon has signed 27 four- or five-star players over the last four recruiting years, while Boise State has signed only four. Either the Ducks got out-coached badly or the players did not perform to their abilities … and I am puzzled as to why that could be–are you?

Something we will cover at a later time is how confused this offense is–no identity, and very few of the running plays that succeeded earlier in the season. What used to be a high-scoring offense under Bellotti-Kelly-Helfrich is now a mish-mash collection of plays with no underlying system behind it all. It, too, is a mess. The lies are worse than the bite.

No matter what was said, that was not the team that beat Arizona or planted 69 points on Oregon State; I think the players were simply confused and unsettled about it all, and it showed up in a lack of effort, concentration and discipline. Playing a bowl game so soon after Willie Taggart left, with players not even knowing if their position coach would stay or if system next year would be the same, just messed with their head.

Throw in a new recruiting signing day and coaches split between flying around to visit recruits and preparing the team for a bowl? That detracts from a complete performance, a clear head, and confidence in what you’re doing as a player. The timing of the head coach bailing on the Ducks (the only coach in Oregon history to leave after one year) and all those broken promises to players did a bigger number on these young men than we all thought.

The impact of Taggart’s betrayal was beyond two weeks, and it points to a bigger challenge in the off-season than any of us realized. The coaching staff has a big job ahead of them, and we fans will have to maintain the balance of asking the tough questions while remaining loyal to the program.

A big task for all.

P.S I know the top photo is not of the game, but I am not waiting around three more hours for pictures from the photographer I wasted money on for the bowl game. I wanted to get this article up and done …