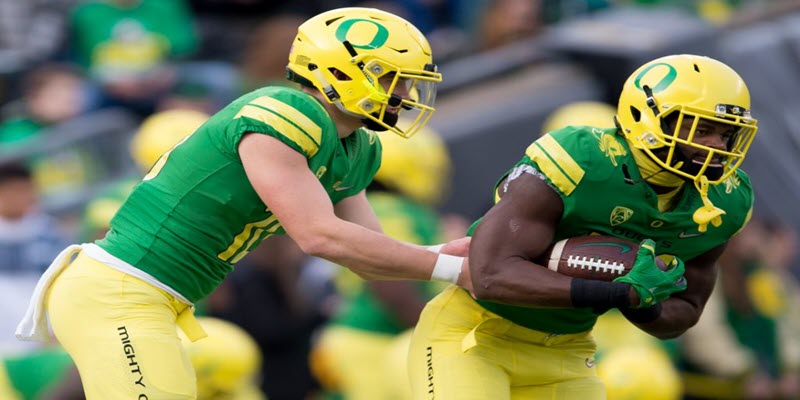 The Zone Read has been a staple of the Oregon offense for more than a decade now. Since the day Chip Kelly first set foot in Eugene, the Duck offense has used this play to punish even the most tenacious of defenses. Indeed, the Zone Read has become one of the pillars of Oregon football.

Traditionally, Oregon has run the Zone Read from their preferred formation of the Shotgun. With the arrival of Coach Jim Mastro, we expect to see the Pistol evolve from prior sparse usage to a more common formation within the offense. Because of this, we are going to take a look at some of the key differences between the Zone Read from the Shotgun, and how Mastro teaches it from the Pistol. The first difference is small, yet not insignificant. The aiming point of the running back in the Pistol is not to the frontside, like in the Shotgun, but to the backside, or the same side as the “read” player for the quarterback. This allows the running back to come straight down towards the line of scrimmage, giving him additional time to read across the entire line and decide which hole is going to come open.

The video above shows Oregon’s traditional execution of the Zone Read from the Shotgun. As you can see, the running back’s aiming point is to the A-gap on the opposite side of the line, away from the defensive end being read. Because of the angle at which he receives the ball, only one side of the line is really available for him to read.

The next video (above) shows the University of Nevada running the Zone Read from the Pistol. The aiming point for the running back here is the A-gap on the read side. Notice that this  is on the backside of the blocking scheme, as the offensive line is still zone blocking to the right.

Because of the depth and angle at which the back receives the ball from the Pistol, he has time to see what’s going on across the whole line. Above, the Wolf Pack RB sees the congestion at the line soon enouh to bounce outside and pick up positive yardage.

An interesting tidbit here is that when Nevada would run Inside Zone (without a read), the back’s aiming point was the A-gap to the front side of the zone blocking scheme as opposed to the backside. Both are straight downhill to the playside gap, but the direction of blocking changes dependent on Inside Zone or Zone Read. Just something else for the defense to have to account for.

Mastro also teaches a Snatch Technique instead of having the quarterback use a Ride and Decide method on the Zone Read. This simply means that the QB has already decided to keep or give before the RB arrives instead of riding the handoff and deciding in the midst of the mesh. That is a very bare bones description of the technique, but if you’d like to learn more about it, Coach Mike Kuchar over at XandOLabs.com has a great breakdown of it.

I am waiting with excitement for the spring game, as I’m very curious to see how much the Ducks plan on using the Pistol. If they plan on using it frequently, this information is going to be good for us to widen our understanding of the Oregon offense. And if not, well, it’s never a bad thing to know more about this great game of football.