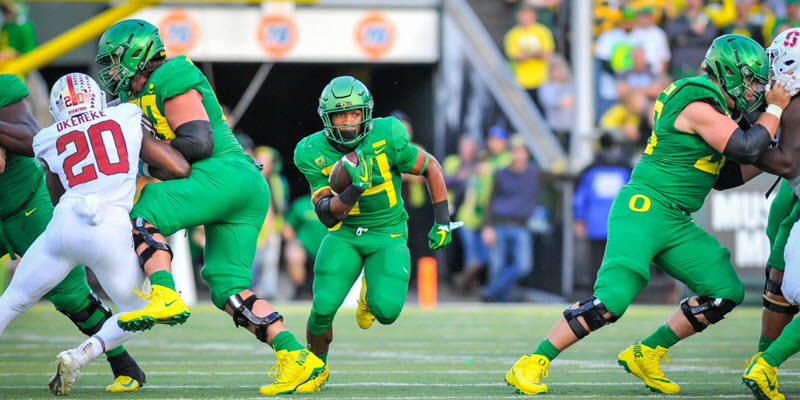 That sounds ludicrous to most, but it is my honest feeling the morning after, as my perspective is a little different than most. (Some would say quite flawed at times, but I can live with that). You see, I honestly thought Oregon was going to be clobbered by Stanford due to the many problems I saw when carefully analyzing the first three games. Yet, some sagacious words given to me helped to alter my perception and realize the path and potential of a new Oregon team unfolding before us fans and the nation.

I saw what happened as we all learned about the arcane “pylon” rule that even the ESPN crew was unaware of, and the errors that brought about the loss. But admit it – Oregon came out and surprised you beyond your expectations. For example, Jacob Breeland was missing blocks against San Jose State and even Portland State … but came to play, as did the rest of the team, which was underwhelming at times during the non-conference games. Coach Mario Cristobal was not pleased with everything he saw either.

Yes, we can moan about the “not-taking-a-knee” by Mario Cristobal, but those are the classic decisions that fans never give a second thought to unless they don’t work out. Coaches at Oregon have run out the clock in close games on the ground (Cal in 2010) in the past without a freshman hanging the ball out there. For a new staff, I thought the game plan, the diversity of plays, balance of offense and the physicality for a first big game was superb. The mistakes are correctable, and the upside to this staff and this team over the long-term is exceedingly bright.

I was lamenting last week about the current “dud” Oregon offense to FishDuck.com Talent Evaluator, Mike Kelly, and wondering how we were going to beat the Alabama and Clemson teams out there at their own game? His wise words are good for all of us to ponder …

“The way they play has proven to win, and that is what this staff is working for — so that yes, we do eventually do beat them at this style of game to win National Championships.”

So even though we are moving away from the original Oregon Spread Offense (that I love and have a couple of hundred analysis articles about), which scored a ton of points and failed to win the Natty, we are embracing a stout defense and a power running/Pro-Style passing offense to win the ultimate prize that Duck fans yearn for. I have to give up the original Mike Bellotti/Chip Kelly/Mark Helfrich Oregon Spread Offense of the past in order to win it all, and my question going into this game was whether Oregon could actually pull this off over the long term, or whether we would take a major step backward Saturday night.

Dillon Mitchell had a break-out game for the Ducks.

Let’s fast forward four years from now, and this time, both teams are ranked in the top ten for an epic GameDay showdown; would it be much different than that incredible game on Saturday? Forget the mistakes for a moment and think about all the amazing plays that both teams achieved. That my friends, was a top ten match-up type game we witnessed, and Coach Cristobal placed it before us in his first year!

Oh — I know we are a long ways from arriving in terms of talent, as Cristobal needs two more extraordinary recruiting classes to lay the base … but he will. Recruits at the game yesterday shared their excitement about the atmosphere, the program and how “something special is happening here.”

Oregon’s defense stood toe-to-toe with Stanford on the big third and fourth down plays and stoned them back like never before! I did not like running for only 178 net yards, but the Cardinal only had 71 yards against the new Jim Leavitt defense. We played Stanford … like another Stanford or Washington would in the trenches, and it was thrilling for me to watch. Such massive progress so soon!

In some respects, we appear to be further along in our progression than we actually are, as Justin Herbert, Troy Dye, Justin Hollins, Jalen Jelks and Ugo Amadi are seasoned upperclassmen that will be not be quickly replaced, but when they are, we will be deep later with such talented players.

Cristobal pulled out some plays from the Bellotti/Kelly/Helfrich Playbook?

You cannot imagine how gleeful I was to see two plays run from the original Oregon Spread Offense playbook, and how surprised Stanford was! This was brilliant, as it was unexpected and this group of blockers knows how to run these plays with excellence. The formation shown at the beginning of the play above is the Pistol, but shifted into the familiar “wing” set for the running back. Above, we see that Calvin Throckmorton (No. 54) is moving inside to help with blocking and ignoring the Cardinal defensive end (red arrow above).

Herbert is looking at this defender above as the “read-key,” and since the defensive end is not charging, the ball is handed off.

Look at this wonderful blocking!

This ol’ offensive lineman had air under his behind hopping off his chair from the blocking you see above. Breeland (yellow arrow above) is putting his man on his keister, while Ryan Bay (No. 87 and black arrow) is plowing his defender to the sideline while Shane Lemieux (green arrow) is helping to create a nice running lane for CJ Verdell to make a cool ten yards.

My friends, we only saw this play above twice during the game, and the second time we watched Herbert pull the ball and keep it, but it is a play that still works, and is nice to consider as a variation to mix things up.

The beginning of the “Loaded Option” for Oregon.

It is “forehead-slap” time as I hardly believed my eyes that the “Loaded Option” was dusted off and used at key times during this last game. It is not new to Oregon; we ran it in 2014 against UCLA, Stanford, Utah and in the Rose Bowl in the NC playoffs versus Florida State. The idea is to block the defender assigned to the quarterback, and it is a run play for Herbert all the way. (See the full article about this play here).

Above, we have what appears to be Herbert looking at his “read-key,” as the defensive end of Stanford (orange arrow above) is pulled inside following the pulling action of the Duck left tackle in the opposite direction of the intended play (yellow arrow). The inside linebacker (red arrow) is clearly going inside to plug an “A” gap, while the H-back (dotted green arrow) is looking for the first downfield target who would try to tackle his quarterback first.

This is damn good game-planning and a great third down call by Marcus Arroyo. The impact it had on the Cardinal defense and future opponents cannot be measured. We love it!

Coach Cristobal has Oregon on right path, and it is going to take time to achieve it. Can Duck fans be patient enough? That does not mean a decade of Rich Brooks fan patience required, but I see three years before we truly challenge for a National Championship, with a perennial team in the hunt thereafter. In the meantime, I will be enjoying writing about the journey, along with the discussion, and learning from all of you just as I learned from Mike Kelly this past week.