Note: After every game this season, we will have a correspondent from FishDuck.com at the Opponent Press Conference to learn what the coaches and players of the opposing team are saying about our Beloved Ducks. The first one is from Mike Ostrom in Dallas, Texas, and we are grateful for his time and expertise.

At the end of every game there is a document in the press box detailing all of the statistics that are available to the media. The front cover on Saturday night read: “OFFICIAL GAME SUMMARY OREGON 21, AUBURN 27. Attendance: 60,662.”

It should have said, “Auburn played to win. Oregon played not to lose.”

“Auburn’s a tougher team,” said Tiger Senior DE Marlon Davidson. “We just came out and dominated in the end when it counted. We played Auburn football.”

Which brings up a good question. What is Oregon football? Answer: Solid for three quarters, and very, very conservative when it counts.

Defensively Andy Avalos‘ boys nailed it, and the future looks bright on D. Offensively, Oregon played winning football and called winning plays for three quarters. Then, the fourth quarter came. Unbelievable play calling. UN-BE-LIEVABLE. Where were the passes downfield? With the game on the line, can Justin Herbert please fake a hand off and hold onto the ball a couple times and scramble outside like Bo Nix? Nix had 50 yards rushing; Herbert had 11. The designed run was nonexistent when it counted. 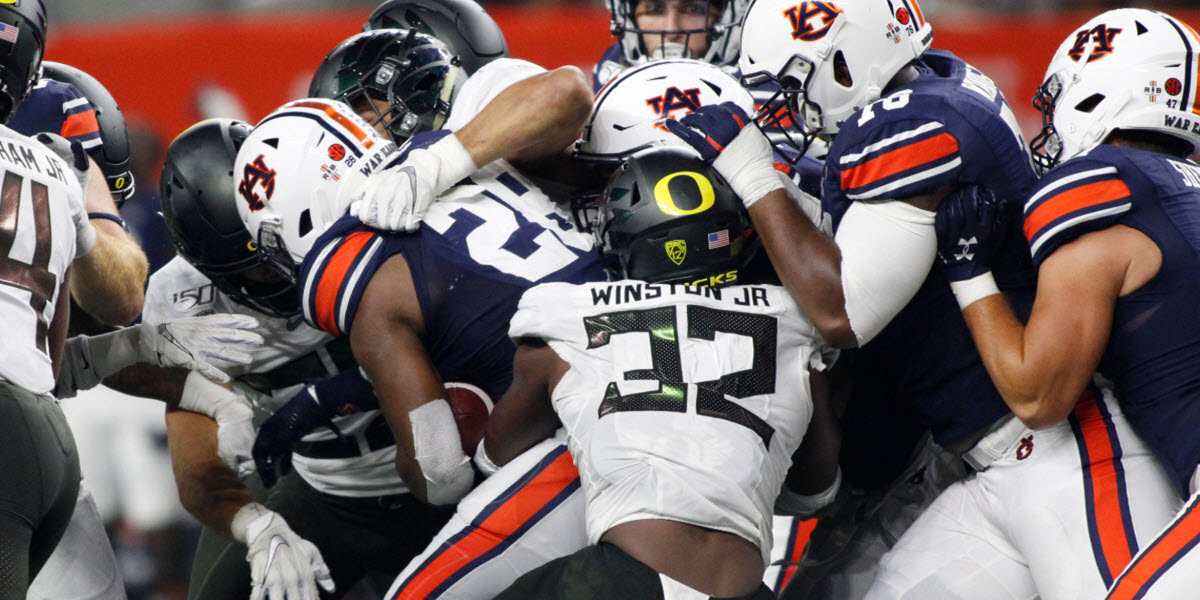 There were a ton of great plays on defense and reasons for optimism on that side of the ball.

There were many many times, especially in the second half, where Auburn didn’t account for Herbert. He could have run for 10+ yards without being touched and slid safely onto the AT&T Stadium turf. Big arm, smart guy and Oregon just calls 90% short passes and screens? Dink and dunks rarely succeed when that’s all you run for four quarters. Where are the double moves? Run Pass Option anyone?

Please, please, please stretch the field every now and again. The few passes that were thrown downfield were big winners. Johnny Johnson brought one in for 47 yards, Spencer Webb caught a 20 yard TD pass. These are good things, so keep doing it, but just calling a couple passes to stretch the opposing defense won’t cut it.

Auburn knew they couldn’t pass the ball consistently against Oregon, as at one point Bo Nix was 6 of 20 with two picks. Everyone knew Auburn’s only option was to run the ball.

“We talked at halftime; we need to turn this into a line of scrimmage game, and in the second half we were able to do that,” said Head Auburn Coach Gus Malzahn. “Our offensive line just told me, ‘Coach, let’s just run the football. Let’s just run over them.'” And they did it enough to get back in the game. The Tigers were more physical when it counted.

Oregon outplayed Auburn for three quarters and could have won going away, but when Tigers made a commitment to play smash-mouth football — Oregon flinched. It’s not the defense’s fault. Giving up 27 points away from home is acceptable. Why is one of the best quarterbacks in the nation throwing short passes over and over and over? Realize this is an Auburn team that went 3-5 in conference last year. Yes, they beat Washington, but they also lost to Tennessee. 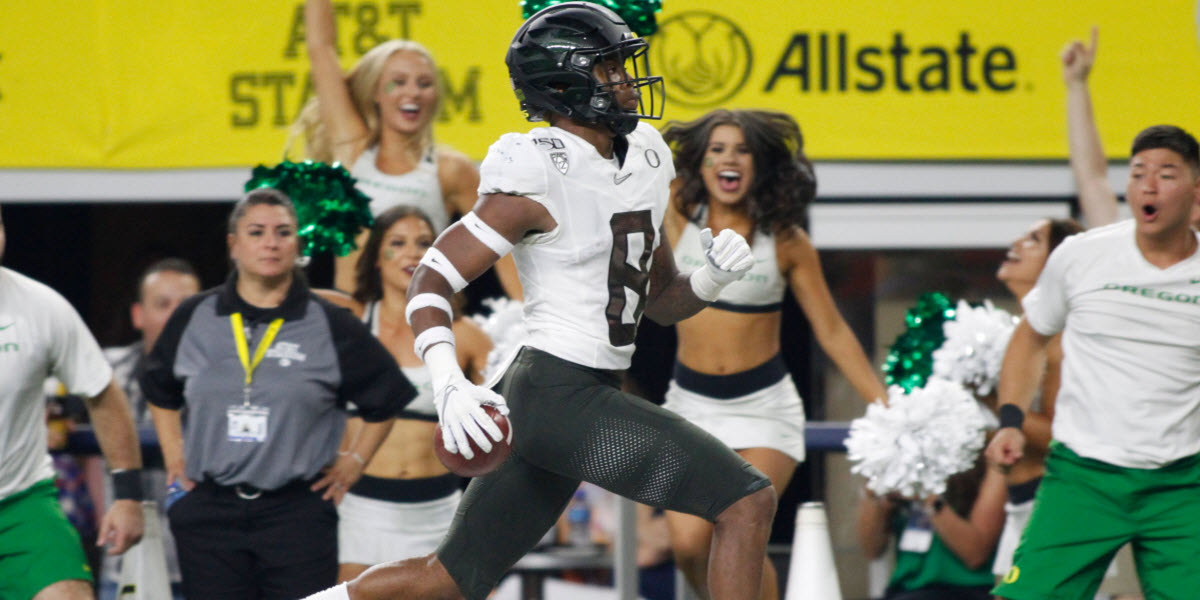 A tremendous punt return by Jevon Holland was wasted …

Tennessee got beat by Georgia State yesterday. What percentage of college football fans even know Georgia State’s mascot? The point is, Auburn is SEC mediocrity. Playing not to lose worked in the Red Box bowl, barely. With that mentality … that’s Oregon’s ceiling? Narrow victories in after-thought bowls?

Oregon played the fourth quarter with one hand tied behind its back, and unfortunately, that hand was Herbert’s. It leads opponents to think that Oregon is weak when it counts. “I feel like we wanted it more than they did in the second half,” said Auburn’s talented running back, JaTarvious Whitlow.

He’s wrong. He’s dead wrong. But Oregon’s coaching staff didn’t give the offense their best chance to win. The Ducks ran the ball seven times for four yards in the fourth quarter. No fly sweeps, no flea flickers, nothing creative. Nada. 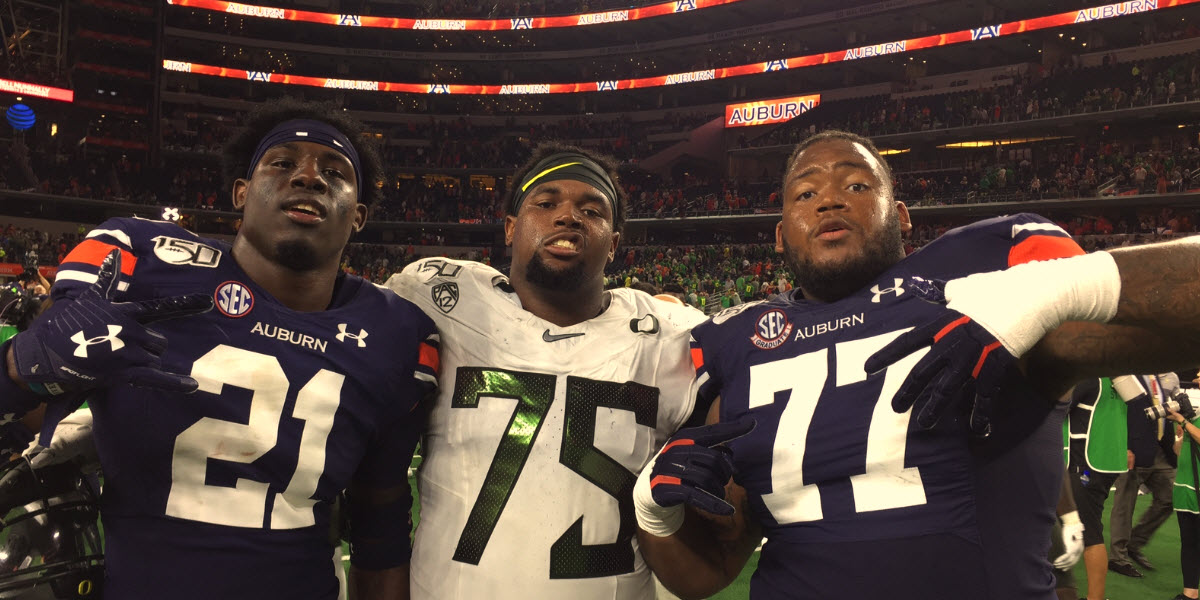 After the game, I ran into Auburn’s Marquel Harrell on the field. He asked me to snap a picture of him, a Tiger teammate and Oregon’s Dallas Warmack and text it back, which I did. I followed the picture with a question for the 309-pound offensive lineman. Where would Oregon rank in the SEC? All he could muster was a vanilla comment …

That dull response is identical to Oregon’s 4th quarter play-calling, and it’s becoming tiresome. Harrell called Oregon solid. Maybe in the 1970s that would have been acceptable to hear, but solid is not what Oregon should be about in 2019. The Duck coaching staff recruits with excellence, has bleeding edge athletic facilities, and if their play-calling catches up, then the future is bright. If not, get used to solid and one-point Red Box Bowl games.

I saw OregonLive‘s John Canzano at the press box elevator after the game, and our game assessments were identical and probably similar to yours. “They’re (Oregon) not ready to win the big game. Just like Stanford last year,” Canzano said. As we lamented the conservative play calling on offense in the fourth quarter, a text popped up on his phone. He showed it to me …

“Oregon played not to lose, Auburn played to win.”

Everyone gets it. Does Marcus Arroyo?