On the night of November 17, 2012 the Stanford Cardinal came into Eugene, and ripped a national championship away from the Ducks. To this day, it might be the most painful regular-season loss for the Oregon Ducks in their history.

Ducks fans have experienced many painful losses, but this one especially resonates because of the implications it had. 2012 was Chip Kelly‘s best Oregon team statistically, and had they not lost that game, they likely would have played for the national championship against Notre Dame.

Notre Dame was a good team, but Alabama exposed their weaknesses in their 42-14 title game win. Alabama had nowhere near the level of offense that Oregon had that year, and they tore through the Fighting Irish and their vaunted defense. 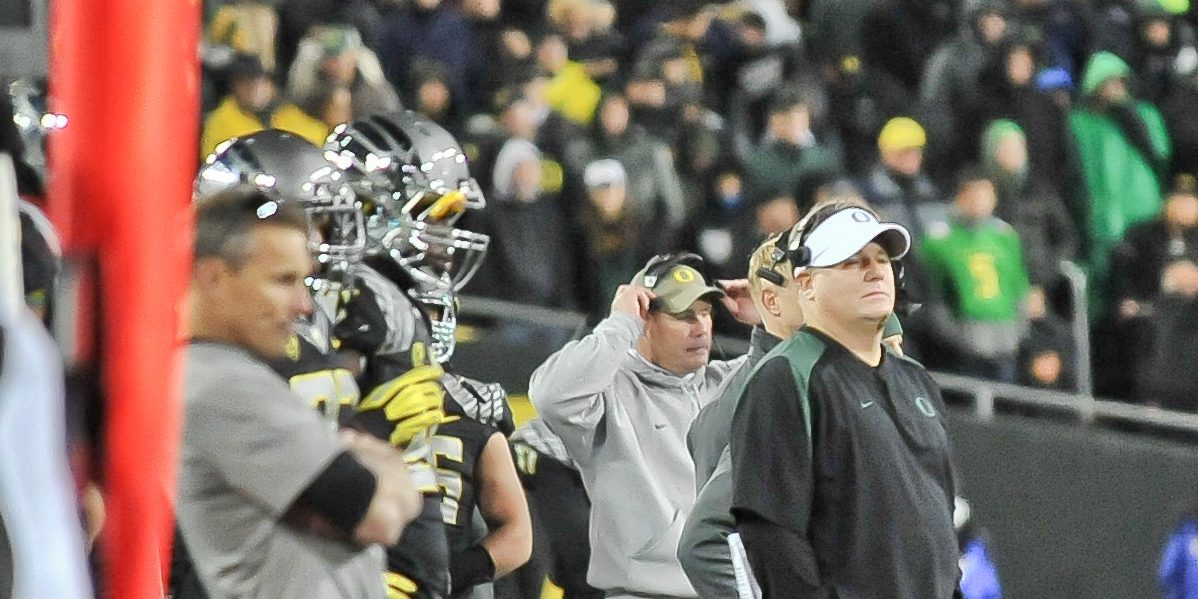 The 2012 Oregon Ducks team was dominant. Kelly had the second-ranked scoring offense in the country (49.5 ppg), scoring at least 42 points in every games besides the Stanford game in the regular season. Kelly’s spread attack was led by players such as Marcus Mariota, De’Anthony Thomas, Kenjon Barner, and Josh Huff, who all played in the NFL. But even with one the best offenses ever in college football, one fateful night cost the Ducks everything.

Stanford’s defense harassed Mariota and the rest of the offense, holding them to just 14 points. Barner, who ran for over 1700 yards during the season, had 21 carries for 66 yards. Mariota struggled with accuracy throughout the game, completing only 21 of 37 passes. The stagnant offense led to eight Oregon punts during the night. 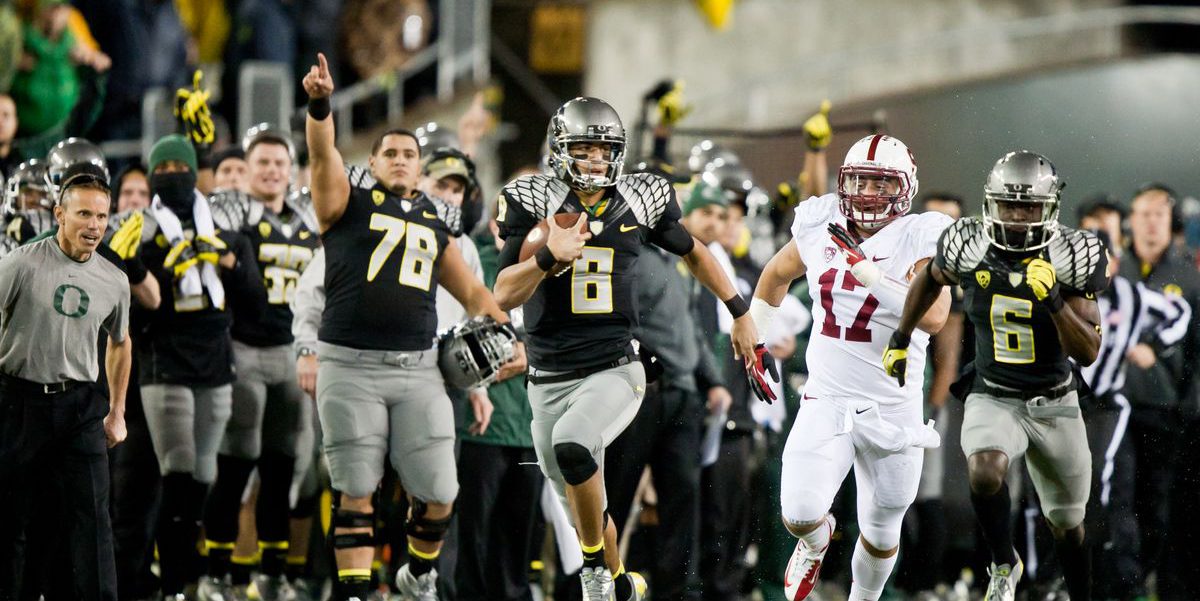 Mariota races toward the end zone.

Midway through the first quarter, Mariota kept the ball and broke away from the Stanford defense. As he sprinted down the sideline, he had Thomas running right near him with only one man to beat.

Inexplicably, Thomas did not attempt to block the remaining defender, and Mariota went down at the Cardinal 15 after a 77-yard run. The Ducks ended up turning the ball over on downs, and Mariota’s long run was for nothing.

This particular play still haunts the Ducks, because had Mariota scored, the Ducks would have been up an extra score at the end, and there probably wouldn’t have been an overtime to lose. The way the Ducks defense played through the night, 21 was enough to win the game. 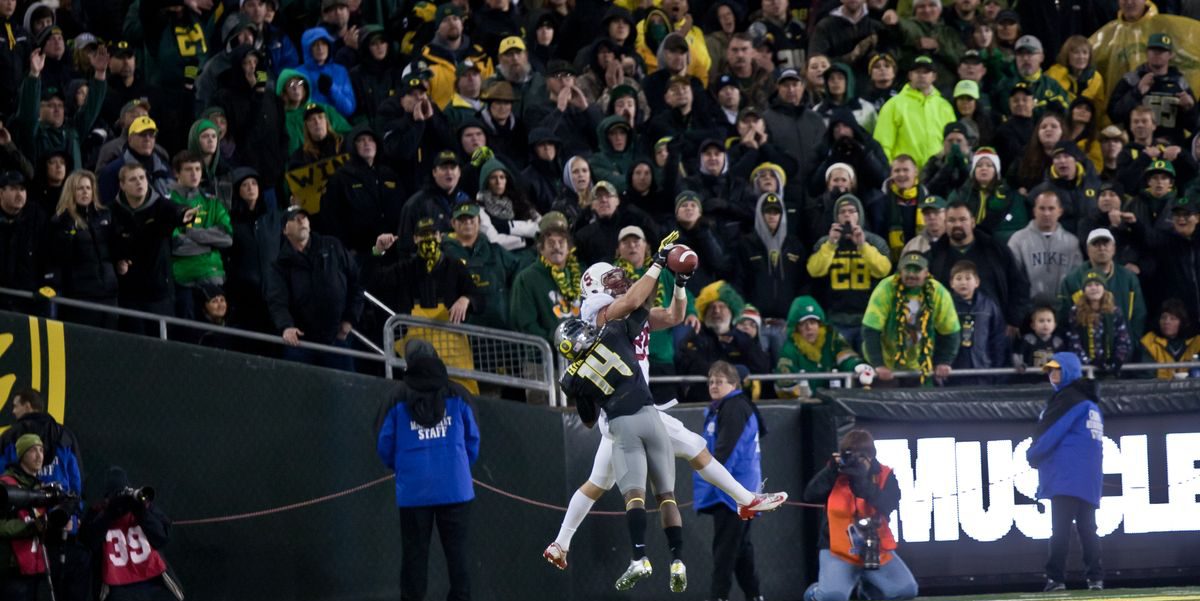 Late in the game, Stanford trailed by a touchdown deep in Oregon territory. Cardinal QB Kevin Hogan threw up a prayer to the back corner of the end zone, which was hauled in by tight end Zack Ertz. The officials ruled however, that Ertz had been out of bounds when he caught the ball. Replays showed Ertz’s shoulder coming down on the white out-of-bounds line.

A replay is supposed to be overturned only when there is indisputable evidence. Yet, somehow the officials felt that Ertz had caught the ball in bounds, and they overturned the call to give Stanford the TD. The play was so close that Ducks fans felt that the officials should not have been able to overturn the ruling on the field, and should have let the call stand. But Ertz’s catch counted as the game-tying score.

Alejandro Maldonado had a crucial miss in OT.

Alejandro Maldonado. Oregon Ducks fans will never forget that name. Even after the terrible performance on offense, and the late TD by Ertz, Oregon still had a chance to win in overtime. The Ducks had the ball first but had to settle for a 41-yard field goal attempt. With all of Autzen Stadium waiting and hoping, Maldonado pushed the kick to the left, and it clanged off the upright.

Stanford now had their possession in overtime, and the final dagger finally came for the Ducks. All the errors for the Ducks would not be erased. Jordan Williamson calmly connected on a 37-yard field goal to give the coup de grâce to the undefeated season.

The Legacy of this Game

Because of one horrific game, what was arguably the best Oregon team of the entire decade never had a chance to play for a national championship. The offense could not get going, and Oregon lost.

There are some losses that fanbases will remember for the rest of their lives. This is one of those losses. The Ducks should have played for a national championship in 2012. But in the end they didn’t.

This game cost the Ducks a chance for a title. What do they need to do to get over the top?