In a game filled with frustrating moments, it is only fitting that decisions made on the side of the ball that was having some success (the offense) ended up losing the game in the final moments for Oregon. Where do we start in our analysis, and frankly, how far do we want to go? A porous defense and a conservative head coach at crunch-time … factors we have discussed often on this website are again the major elements in an embarrassing loss to Oregon State.

Why embarrassing? Oregon State has improved, but not enough to justify a win by Coach Smith’s squad this soon in the rivalry game. No, Oregon has regressed in stunning fashion and declined to a level on defense that nobody would have imagined going into this season. Last season, the Ducks gave up on average only 16 points a game, and now that group is giving up just a touch under 30 points per game? Last year, the Beavers scored 10 points on the Ducks, and this year that number ballooned to 41 points? Holy Crap!

My friends, scoring 38 points should be enough to win, and there is no reason why Oregon could not have won a 38-24 type of game (the initial point spread). Has the conference caught on to the Avalos defense? Is something is seriously wrong? 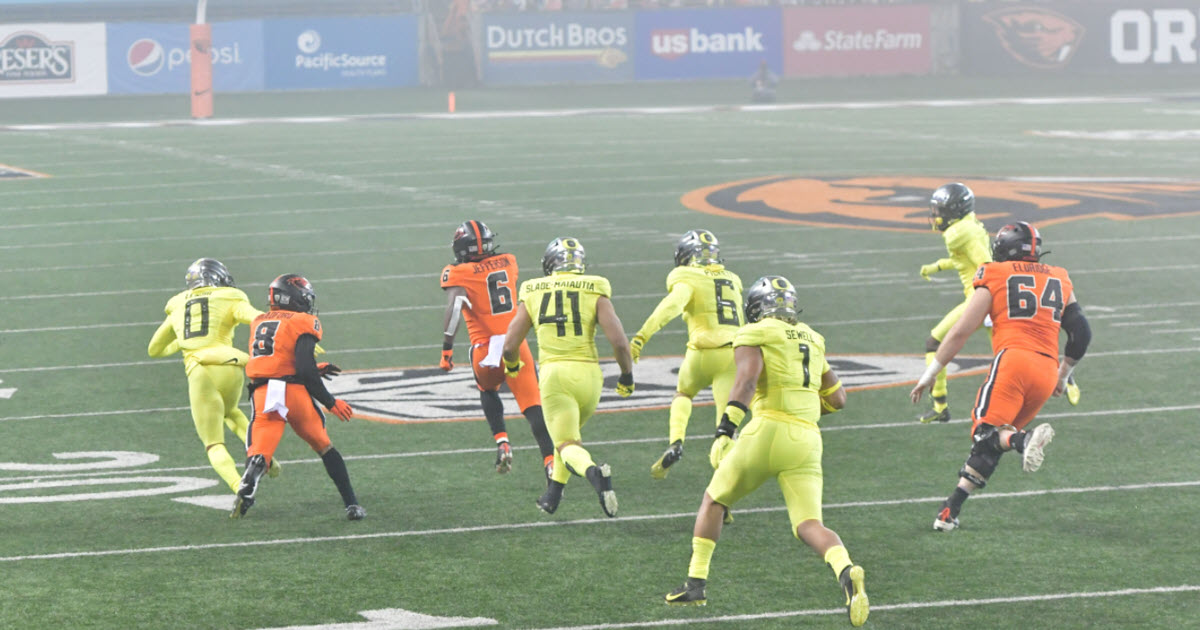 A familiar sight is viewing Jermar Jefferson from behind …

Worse than we THOUGHT?

I have written about how the primary four players on the defensive line from last year are horrendous this year by comparison. But even that does not tell the entire embarrassing story, as the Beavers started the smallest offensive line we played this year and probably ever will play. I grant that Jermar Jefferson is a terrific back, but even their other running back, BJ Baylor, would have had 150 yards running through the holes the Beavers created in the Ducks’ front-seven.

Oregon has a pretty serious rebuild on defense ahead, and I don’t want to hear about all our great young talent, because the Ducks just got beat by a bunch players Oregon probably never even extended offers to. And we had more than enough experience on this defense to play better than this. Coach Avalos, what-the-heck?

Many of you recall how I wrote last Sunday about the aggravating end-game decisions and how Coach Mario Cristobal almost blew it against UCLA. Sadly, he did not learn from this. Maybe it takes a painful loss to drive it home. As you recall, my philosophy at the end of the game is to do whatever it takes to get first downs, because…

“First downs at the end of the game are as important as touchdowns earlier in the game. Without both, you don’t win.” So what if you go-for-it to achieve the three first downs and fail. Would it be any worse than this?

Cristobal’s thinking was to go conservative, but that is not what yielded wonderful plays and 38 points to begin with. You have to show the same ingenuity and guts in the last two minutes that you demonstrated earlier in the game in order to win! Running the Pistol earlier in the game worked out often because of the variety of plays presented, between the Jet Sweeps, flare passes to running backs and crossing drag routes to receivers. Mixing up the offense and then running the Pistol Inside Zone makes it all work better, right?

When we ran a Pistol-Plunge on first down of our final series, I knew we were toast.

Lovely. So now we have problems on offense and defense?