The Spring Game is just a glorified scrimmage. It’s something all fans know, but we still get excited about the prospect of seeing new Oregon players show off their potential. It also gives fans something to talk about after a long and uneventful February. National Signing day is over, which is even less eventful now with the early signing period in December, and all we can do is wait for Spring Practice news.

However, the Spring Game could, and potentially should, be so much better. Why can’t the Spring Game be an actual game against an FCS school? This would be a win-win-win for all involved.

Meaningful Snaps for the Team

One benefit of playing an FCS school in the spring is that the players and coaches would get a chance to play a meaningful game before the season begins. Typically, games against FCS teams are very vanilla, so it is not like coaches would have to show their hand in terms of unique play calling and formations. The younger players, especially, would get a feel for what game week prep is like at the college level. 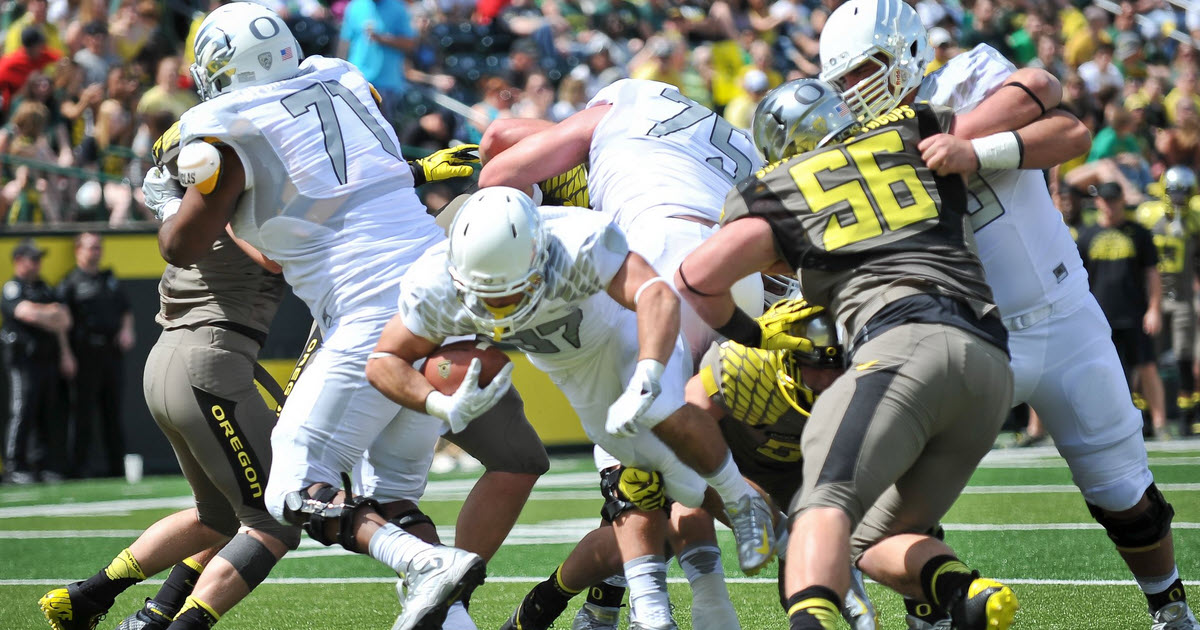 The Spring Game is always a chance for players deeper in the depth chart to show off their potential.

This would create consistently meaningful snaps for the team, because they are having to work against an unfamiliar opponent. It would also allow a more fluid rotation of players and groupings on the field. It is difficult to have two fully functional rosters for the Spring Game. We have all seen plenty of offense versus defense Spring Games, and, frankly, they are pretty boring.

Playing against another school gives both teams the best “game day” footage they are going to get until September rolls around. Yes, the biggest downside is that it gives every other future opponent some good footage to study, as well, but these games are always pretty vanilla, so that shouldn’t be much of a concern.

The Spring Game is already all about the fans. It is a chance to see the team in action, even limited action, and see the growth of the players. It is also a chance to get a feel for new coaches, whether it is a new head coach and complete coaching staff or just a new coordinator. It is usually the first look at the future of the team.

With an actual game, the fans and media get themselves a real game to watch, and there would be more meaningful takeaways. Usually, the Spring Game is difficult to judge, because a strong offensive showing can mean either a very good offense or a terrible defense. The same goes with a dominant defense. As fans, we learn next to nothing about our team — only that some individual players look good or have grown. De’Anthony Thomas was a spectator at the 2015 Spring Game. This year, he will be an honorary coach.

The Spring Game typically results in a sparsely filled stadium. Some fan bases turn out more than others, but no program truly fills their stadium for a Spring Game. But with a real game, or as real as it gets out of season, fans could turn up in droves to see something that was not just a glorified scrimmage. The Spring Game is usually a great showcase for recruits, as well. Think of how much better it would be if it came with a stadium full of fans?

Then, finally, the FCS schools need the money. The least popular games for every FBS team are the games against FCS opponents. Sure, they are usually free wins and a chance to play some back-ups, but overall, they are boring games that don’t hold much significance, so long as the FBS team wins as it’s supposed to. However, if an FBS team loses these games, they can pretty much kiss their season goodbye, and the coaching staff will be defending themselves from an angry fan base. Just ask former Washington Huskies Coach Jimmy Lake. During the season, these games aren’t usually fun to watch, and they make the football season feel cheapened. However, these games would be fantastic events in the spring.

FCS schools would jump at these boring, one-sided games in which they show up to get beaten by FBS schools because of the money. FCS schools depend on the money from these games to fund not only their football program, but a good portion of their entire athletic department. Unless there is a major change in the way athletic programs are funded, these games between FBS and FCS schools must continue for no other reason than the survival of FCS athletics. And it wouldn’t just be FCS schools who benefit from this game. The elevated media coverage would allow for the FBS schools to make money in the process. Currently, there is some fanfare for Spring Games, and most are covered on conference television networks, but for the bigger schools like Oregon, USC, Alabama, Ohio State and others, having a Spring Game against an FCS school would garner the attention of ABC/ESPN or Fox at a prime time spot. This could give even struggling programs a much needed boost of revenue.

The Spring Game is always an event that the most die hard fans look forward to, but wouldn’t it be better for everyone if this was an actual game, even if it is against just an FCS school?