Listening to interviews with OC Kenny Dillingham is exciting, and it was even better to see many of his principals on display in the Oregon Spring Game. He is creating a “growth” culture on offense begun by the head coach Dan Lanning, and as an example of this new focus–Coach Dillingham was pleased to hear how Seven McGee spoke of improving more–even after a fabulous Spring Game performance. Wanting the players to be “Addicted to Success,” is quite the mind-set that the Oregon coaches want to develop at Oregon.

But hearing it happen in our Offensive Coordinator was also pretty exciting to me!

I’m getting ahead of myself in my enthusiasm; I was listening to an interview with Coach Dillingham, and I regret how I did not save the link to give attribution credit. However I ask you to trust the notes I took from this interview that did not get wide dissemination. He was asked about his commitment to creating one-on-one matchups that favor the offense. When asked about the play Bo Nix and Auburn made with nine seconds remaining in the game versus Oregon in 2019–he replied…

“We kept playing and we made a big play in a one-on-one at the end.” 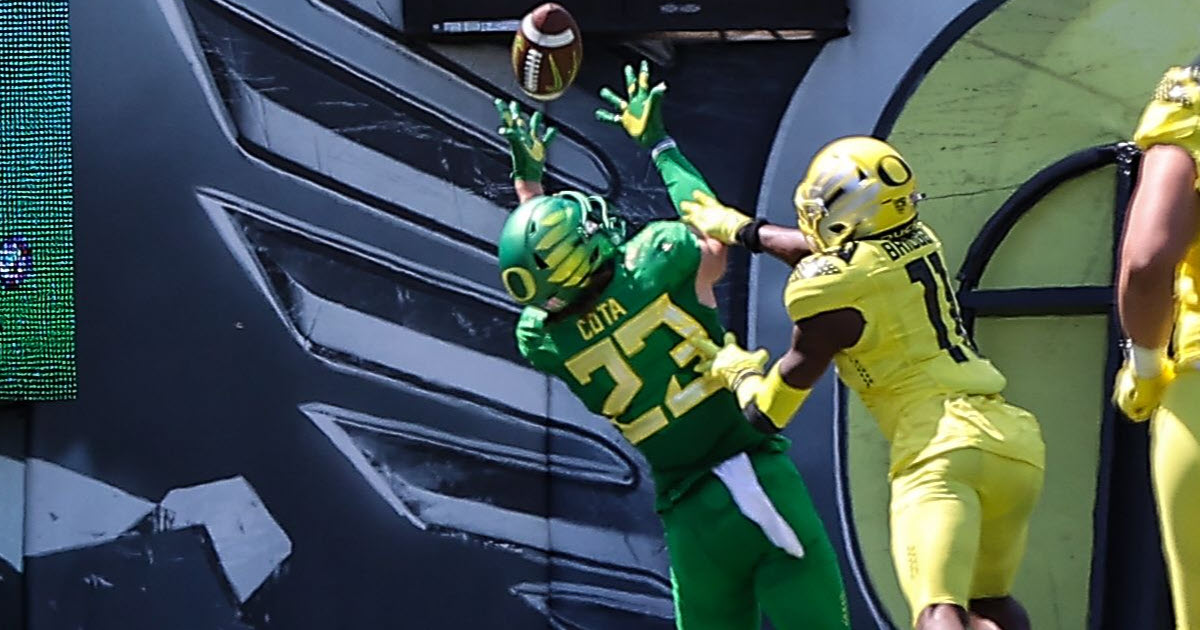 Good gosh the wide receiver room is deep with the addition of Chase Cota.

While that was a gut-punch, it did demonstrate that he “walks-the-walk” with his offensive philosophy, and yet at Oregon–I feel he has many more weapons on offense for Nix to work with than Bo’s freshman year with the Tigers. We are deep in talent at wide receiver and tight end, while the Oregon running back room may shock the conference before the end of 2022. But the part of the interview that intrigued me the most were the questions about Dillingham himself, for example…“how different are you at calling plays now compared to when you began?”

He explained that “not much has changed because Coach Norvell and I worked so closely when I was on his staffs, and this is the third time I’ve not been with him–and the offense is not much different because it is the same offensive philosophy.” The part of the interview that surprised me was in reference to the influence Dan Lanning has had on him already. Coach Dillingham explained…

“We’ll be watching offensive tape, and he’ll come in and say, ‘if you do this stem release here by the No. 2 receiver, which is a bit different–it is going to create more conflict in the defensive coverage.” That raised my eyebrows as Dillingham continued with, “When one of the best defensive minds says, ‘this will put more stress on the defense,’ that’s a huge advantage for me and our offensive staff. We’re going to take every little thing he tells us and implement them!”

“He’s (Lanning) the one who has to defend it, and if he says it makes it more difficult–we’re going to use everything he tells us!” You might recall the story a player recounted in a FishDuck interview where he stated that Lanning was “brilliant” as the coach called out plays and defensive coverages in the Super Bowl…before they actually happened? My friends, this shouts so much more refinement on offense that has not been witnessed at Oregon in a number of years. The in-game adjustments from the sideline bodes well this year, and these comments point to exciting times coming on the offensive side of the football.

Should I be telling myself, “calm-down Charles,” or are you pumped as well? Share your thoughts in “the forum with decorum” because…