This will be a fun season, and Dan Lanning is going to get the best out of this squad. I fully believe it. That means with a new offense, there will be a ton of new contributors. One of them will end up leading Our Beloved Ducks in touchdowns.

Today, I want to explore who we could see being the Touchdown King of 2022 (this discussion excludes quarterbacks, of course).

Last year we had superstar Travis Dye leading the team with 18 touchdowns (16 on the ground, and two more through the air). That’s a lot of production we have to replace since he just made his way off to USC. Who’s going to fill that gap?

I believe it will be Seven McGee. McGee’s the ultimate wildcard piece of the offense this year in my eyes. I can see him contributing at every level of the passing game, running sweeps, between the tackles, and everything in between. This versatility gives him the ultimate edge to be our Touchdown King of 2022.

However, there is one other major role that needs to be filled as well. The Closer. 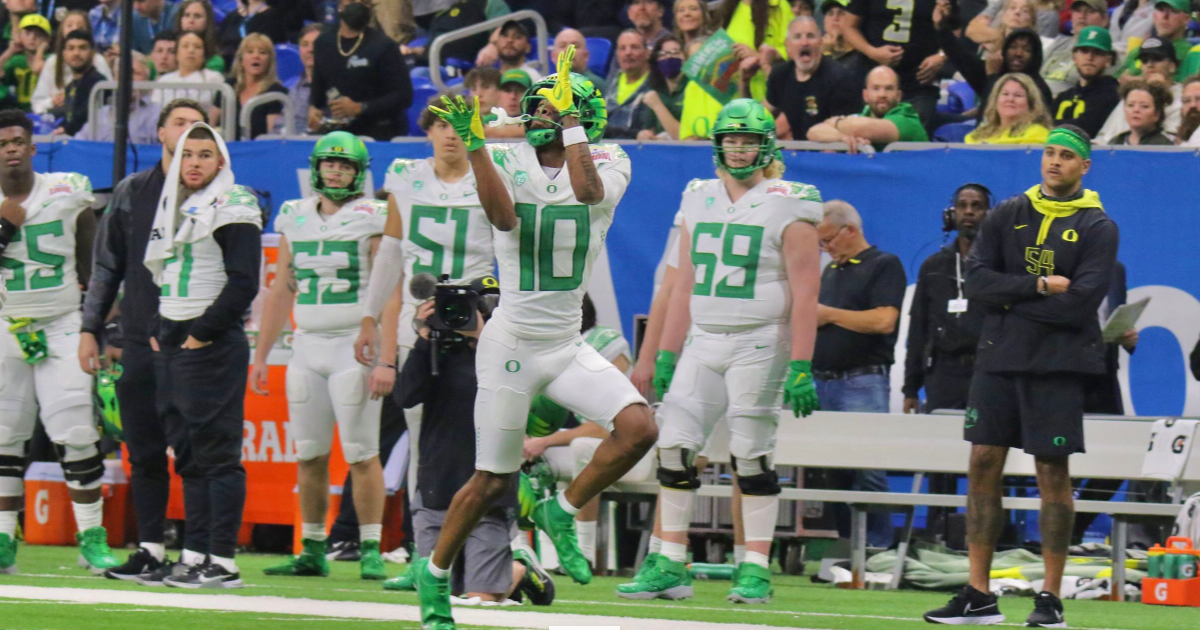 Dont’e Thornton blows by defenders in his breakout game against Oklahoma in the Alamo Bowl.

Who will be the goal line go-to for Oregon Football?

Drives that stall inside of the five-yard line are just backbreakers. To be a competitive team today, you need a closer that can cap off a series with a touchdown. The past few seasons, we’ve had some goal line vultures that scoop up some of those hard-earned scores. A great example is Cyrus Habibi-Likio who managed 17 rushing touchdowns over the 2018 and 2019 seasons (with only 373 rushing yards!!). What does this mean? He was Oregon’s closer. We love those guys that aren’t afraid to get their jerseys dirty, put their nose down, and hit pay-dirt.

Now, this season? I see our red-zone touchdown vulture being Dont’e Thornton. He closed out this past season with some big-time catches, and the massive frame he’s developing into? I see him being an absolute monster inside the five.

Of course, if we stick to being the Ducks of old, we’ll see most of our touchdowns go to this slotback, Christian McCaffery role that we’ve cultivated, and a backup running back with some muscle to close drives (Byron Cardwell, perhaps?). Wouldn’t it be just grand though to see a receiver get big touchdown numbers on the outside?

At the end of the day, I want to see the win column measure up to the lofty expectations Lanning has. But it wouldn’t hurt to jump out of my seat here and there along the way.

What do you think? Who’s going to be Our Beloved Ducks touchdown king this season? If you had to pick out that goal-line vulture, do you think it’ll be someone lining up outside or in the backfield?