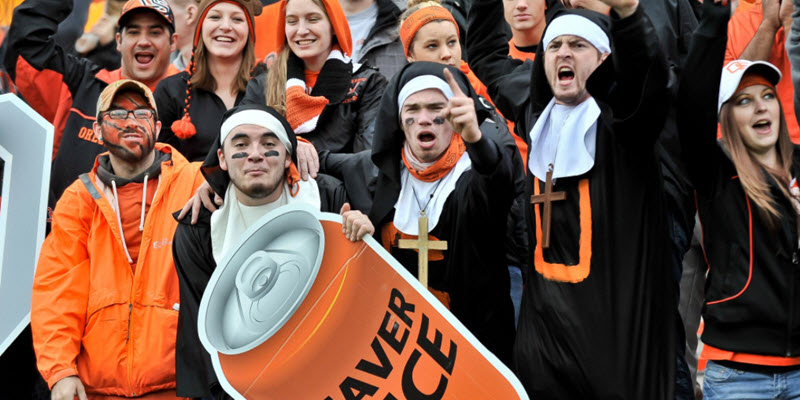 In governance, it’s a truism that if you want more of a behavior, all you have to do is subsidize it.  Of course, the dark side of subsidizing something is that it fosters dependency and an entitlement mentality in the recipients.

When a public entity is not exposed to the stimulating pain of its own errors, it fails to develop a compelling reason to exist, can’t win over the public, complacency ensues and the taxpaying public sees a money pit where their hard earned cash is sucked into nothingness.

That brings us to the fiscal black hole that is the Oregon State University Athletic Department (AD).  It’s a place where an immodest amount of taxpayer dollars gravitates and then disappears without effect.  According to USA Today, the OSU AD is subsidized by “school funds” and other sources of non-earned or contributed income, to the tune of 30.5% of its annual budget.

In the past six years, “school funds” alone – money which is diverted from general school operations and shoveled into the black maw that is the OSU AD – amounted to over $74.11 MILLION! That $74.11M over six years is not student fees (thank goodness for them), or lottery money; it’s school general funds spent to bring in … what, exactly?  To their minor credit, the years in question encompass the 2006 and 2007 College World Series titles. What else?  A “third tier” 2009 CBI Men’s basketball “title.” LOL. Oh yeah, an Emerald Bowl and two Sun Bowl trophies. Hip! Hip! Hooray!

I am a hardcore baseball fan; but be that as it may, collegiate baseball is diluted by many of the best prospects turning professional right out of high school. $74.11M is a lot of collective Oregon taxpayer investment for such a mediocre return on investment.

Then again, I guess we have to cut the beavises a break.  Mediocrity is their raison d’être.  They do not like it when we call them “little brother,” but really – haven’t they earned that insult through their historical incompetence and mendacity?  Their standard retort is to claim to be an older institution than is the University of Oregon, but even a cursory examination of that claim reveals it to be another load of fertilizer produced in Corvallis.  A stroll down an objective version of memory lane exposes, in part, why the latter day beavises are a sinkhole of public dollars.  Aside from wanting one foot always planted in the soil of a farm, “OSU” has never figured out what it wants to be, a malady that has long been apparent in their athletic efforts.

It’s right there in black and white—Oregon State University, 1868.  What is the truth of that implied claim?  In 1868, Corvallis College was owned, lock, stock, and barrel, by the Methodist Church.  They bought it at auction some years before to satisfy a lien.  In 1868, the Corvallis College received state proceeds from the Legislature following the sale of a tract of land.  Did the State of Oregon then “own” the Corvallis College?

Nope.  It was a state supported, but not state controlled, institution. In fact, this newly designated cow college had two boards of control at this juncture, one from the Methodist Church, the other appointees of the Legislature for the Agricultural College.  The school could not yet be a “land grant” institution under federal law because it didn’t own the requisite acreage for such a designation.

In 1872, the place was called the “Corvallis State Agricultural College.”  Students put in one uncompensated hour of farm labor per day.

In 1876, The University of Oregon, the state’s first public university, was established in Eugene.  Over in Corvallis? Yet another name change, this time to “State Agricultural College (Corvallis College).”

1879—Name changed to “Corvallis College and State Agricultural College.” The UO is still the UO.

1881—Another name change, to “Corvallis Agricultural College.”  The UO remains the only public university in the state.

1882—Yet another name change, to “Corvallis College and Oregon State Agricultural College.”  The UO remains unchanged.

1888—“State Agricultural College of the State of Oregon.”  Redundancy anyone?

1890—“Oregon Agricultural College.”  Are they, will they, dare they, become the Aggies?  UO remains a university. 1896—“Agricultural College of the State of Oregon.” Fickle aren’t they?

1900—The Coyotes are disbanded.

1908—Another return to OAC.  The UO remains a model of brand consistency.

1910—The birth of the OAC beavises.  Oregon has been the “Webfoots” for seventeen years or so and will eventually become the Ducks for a shorter nickname.

1937—Now known as the “Oregon State College.”  Inconstant leadership getting to be known as a Corn Valley tradition.

1961—Oregon State College becomes the state’s second public university, 85 years after the University of Oregon was founded.  The Beavises were racing Vanport College, a.k.a. Portland State University, for that honor.  Don’t think this was a formality either, the feat required legislation.

1999—The Angry Beaver appears.  This logo appeared on their football helmets after they left behind the script “Beavers” off the bulk of their 28 year consecutive losing streak, and a period where they aped the look of the Pittsburgh Steelers.
2013—Now, there is a new inspiration:

Wet Gerbils Everywhere Are High Fiving At Their Long Awaited Representation As An Agricultural College Mascot.

Yes, the true name and image drama queens of the state have turned to the world’s foremost sports marketing business, and not even Nike can really do anything with aquatic rodentia.  The company’s Tinker Hatfield has said that since the Oregon Ducks represent a futuristic, edgy take on collegiate athletics, OSU should turn to something that smacks of a reverence for tradition and the blue collar values they mythically represent.  However, the logo below was apparently the best his team could do.  It’s understandable, really.  Only the San Francisco Giants have made orange and black even look remotely good. Everyone else who has tried has failed miserably.

OSC/OSU/OS “University” should have stayed with the Coyotes.

We Could Have Called Them The Minor doogs.

All indications are that tens of millions of future public dollars are yet to be fruitlessly wasted over in Corvallis.  Powered by Orange?  No, little brother is Powered by Red Ink, courtesy of the millions of Oregonians who would never voluntarily have anything to do with them.