The Oregon offense and FishDuck.com have a couple things in common: We both are going through the first major transition in over six years, and the future of both will be quite interesting to follow. I will be writing a very tasty article coming up, “The Off-Season Surprises that Bode WELL for the Oregon Offense,” and it is just the beginning of what Coach Ken Woody, Coach Eric Boles, writer Joshua Whitted and yours truly have planned for the readers of this site.

Consider this a brief “State of the Site” update. I was telling you I would make major changes for years and then would revert back to a heavy schedule of articles, which was too much of a burden on me — to train and manage so many volunteers (over 30 writers and editors over most of the time) on the site while maintaining my own demanding career.

I LIED to you about my Time Off …

I told you that I was reducing the site to three articles a week (Mondays, Wednesdays and Fridays) although on occasion we would have a Thursday article like today and last week.  That part is true, and we will probably have some Tuesday articles during the season, as occasional contributors pop in an article about something they feel strongly about. (But count on three articles a week). I also told you all that I was going to use the spare time to get some rest, some weekends off and maybe even the first vacation in six years, but I lied.  I used the time instead to build the Oregon Football Repository, and after 200 hours of work since early December — between hours spent before work, nights after work and on the weekends — it is not far from being completed. What can I say?  Some people like the feeling of accomplishment, of completing something and having that satisfaction … basking in the glow of a job well done.

So … What are the Results?

Just because you build something doesn’t mean they will come. I wanted to build the 12 new sections regardless of the response, and I hoped that readers would enjoy them. But I’ve been stunned at the initial response. The full 12 sections have only been up for a month, and the amount of views on previous articles on the site number in the hundreds per day already!

I always felt that there were so many articles that could have a lasting impact and could be a source of information for coaches in the Analysis Library. I always thought it would be interesting for fans to go through the Men of Oregon or History of Oregon Football section. It is just cool to be able to quickly find an updated Depth Chart or the Oregon Fight song … or just settle back with a cold one and have some laughs. This was all something that I wanted and thought that other Oregon fans would like as well — and that has turned out to be true.

I Have THREE OBJECTIVES for the site NOW … 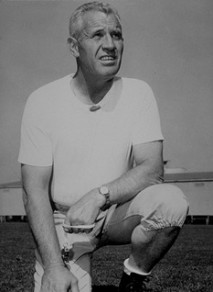 Learn about legendary coach Len Casanova in the History of Oregon Football section.

— This will always be a sanctuary for Oregon fans to come to escape the other serious stuff of life … a place to come and ponder our beloved Ducks with fellow fans who are smart, reasonable and thoughtful. We will continue to have three articles each week, and I love the discussions among all of us in the comments. Thanks so much for sharing your feedback and thoughts. I have learned so much from all of you.

— This is becoming an information resource as no other Oregon site is or will be, and it is constantly growing. We have 1,000+ articles and videos in the 12 sections of the Oregon Football Repository, and once you learn where everything is, you will find it handy … and for FREE.

– FishDuck.com is my own playground where I enjoy writing, analyzing and discussing the latest with all of you. It is a hobby that I will always be doing, and even if I end up being the only writer … and am relatively successful, (you know — only my father, sisters and cousin reading … relatively successful) I will continue to do it because it is fun. It is a hobby I would wish for everyone. Speaking of which …

Join the Fun! Be a Volunteer and Help Other Oregon Fans

We do have two volunteer spots open and if you have the time, we would enjoy having you on board. You can be anywhere in the nation and donate time according to your own schedule. Andrew Mueller donates time as an editor from his home in Chicago after earning his Masters in English at Oregon.

– Video Archivist: Do learn about it here, as we will have the greatest collection ever for Duck fans, and it is pretty darn cool even now.

– Writer: There are some of you in the comments who are very talented writers, and we invite you to consider being on the team. You have about six hours of total upfront learning to do over two to three weeks on how to operate our technology and style. But after you got it — it is great fun. Learn here …

I am not building a massive team again, but will take on a few new writers who want to have the same fun in this hobby that I do, and who can operate independently with the editor assigned to them after they learn our basics.

My friends … I lose my shirt on this site, and it becomes a bit of an issue when I have to take monies out of the family budget to pay for my expensive hobby. Many of you have donated in the past of help offset expenses, and I would ask you to consider throwing some money in to help keep this unique site fully funded. The expenses keep going up and I do appreciate it …

There! You have an site update and the Shameless Beggar on bended knee. We have many great times ahead of us, and I do look forward to discussing them with you in the months ahead. And …