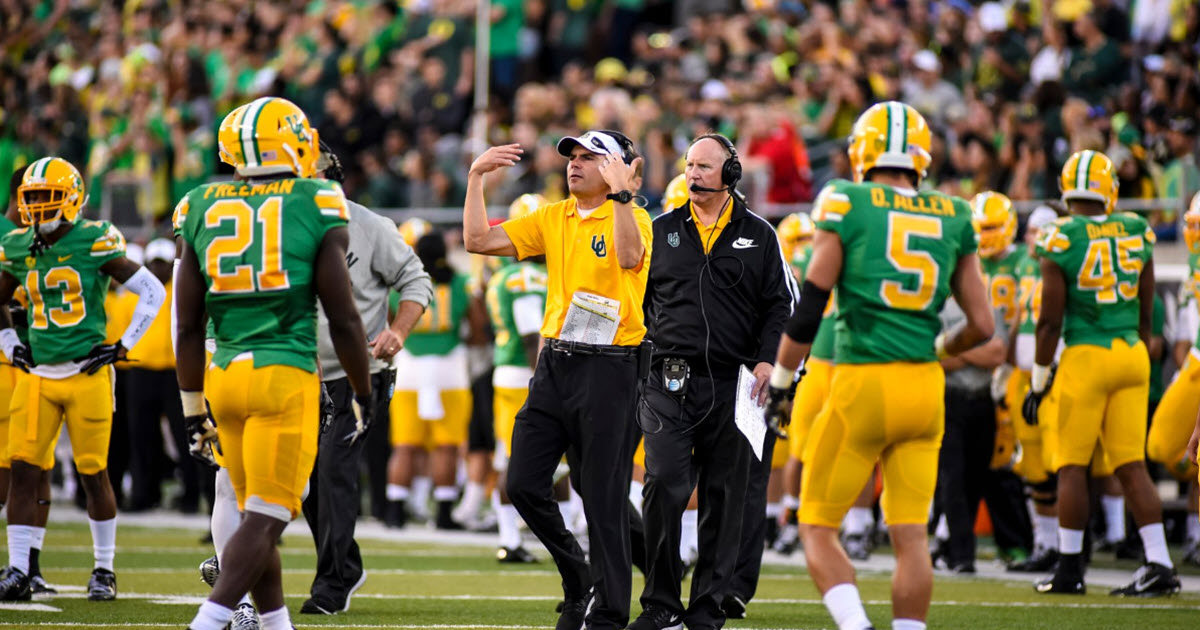 Is Mr. FishDuck out of his mind? Wasn’t it he who stated that Mark Helfrich deserved be fired two days before he was? Why would anyone want to bring back a proven non-performer?

Because he might just be one of the best offensive minds in college football.

Let’s clear the air; I am delighted with the hiring of Joe Moorhead and look forward to studying how he is going to make the Oregon offense more potent. But he is a short-timer in my view, because once he re-establishes his offensive credentials at Oregon, head coaching gigs will come calling. He might only be in Eugene for a year, and frankly, my expectation is two years. Anything beyond that is gravy for the program and the fans.

So, would you take Helfrich back as offensive coordinator when the time comes? 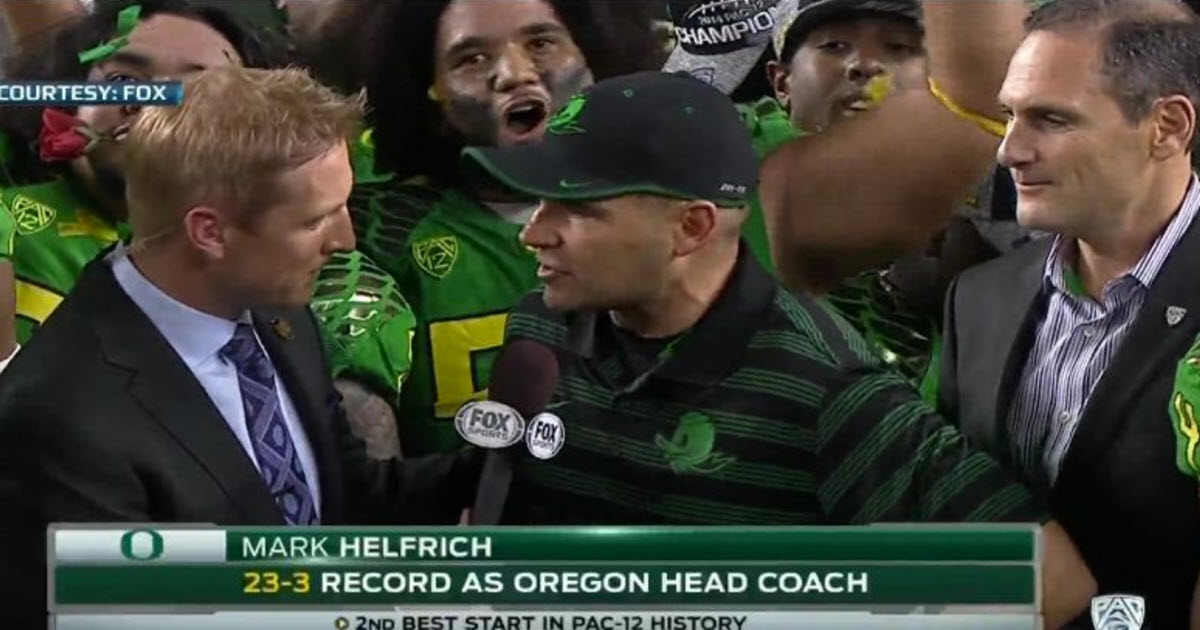 Without Marcus Mariota to command the team, things deteriorated quickly.

I am the first to admit that Helfrich’s weaknesses are pronounced and program killers as a head coach, and yet I marvel at how well Mario Cristobal has proven the opposite can happen. Helfrich was not a great recruiter, as his three years of classes brought an average of a No. 22-ranked recruiting class, while Cristobal has averaged No. 10 in his three years. Helfrich brought in a total of 21 of the coveted 4-Star and 5-Star players, while Cristobal recruited 38 for a stunning 80% increase over the same three-year benchmark. Coach Cristobal has set the new bar.

If recruiting results were not diametrically opposed enough, the two HCs’ hiring skills are also dramatically different. Helfrich hired, arguably, the worst defensive coordinator in the history of Oregon football, and then stuck by him. If Cristobal, by contrast, doesn’t like what he sees with a new hire — he makes a change immediately (example: wide receiver coach). The proof at hiring is a landslide for Coach Cristobal, and thus keeping Helfrich out of that tasking sphere makes a ton of sense.

The final area of baggage was the massive decline of leadership. Cristobal has the “it” factor and his presence just exudes excitement and confidence to all he meets. Helfrich is more inward and without sharing the inside stories I know, I will simply say that he lost the respect of the team in 2015 after Marcus Mariota left. I am not stating that Helfrich should be in a major leadership position again, and I acknowledge his flaws, as many of you do. 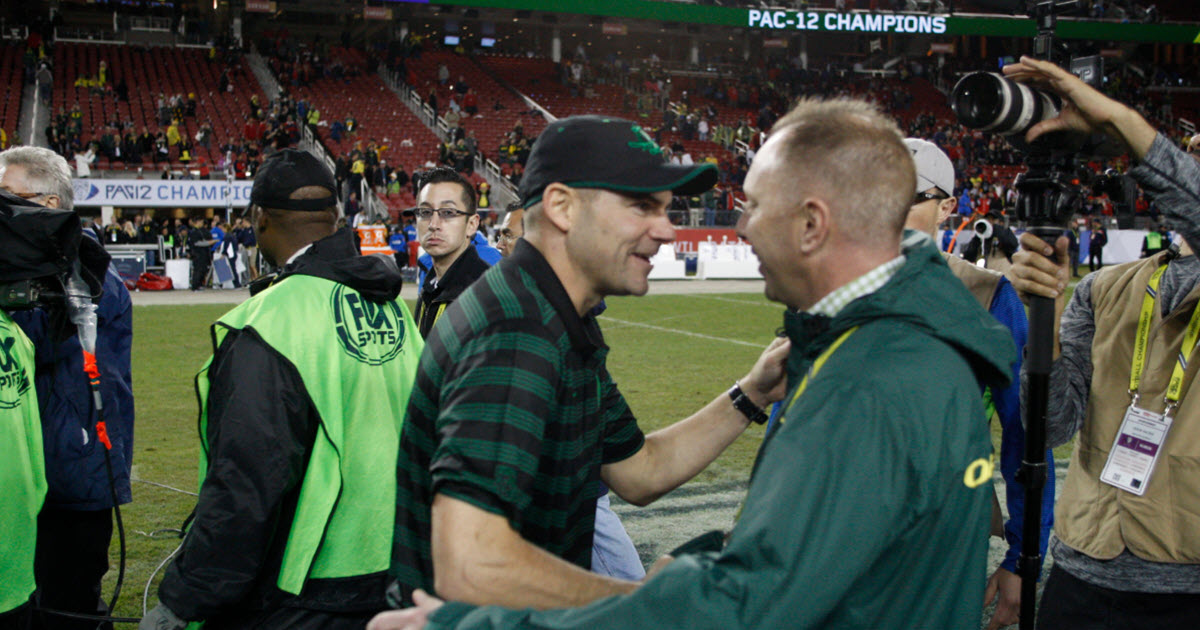 He is IDEAL for Cristobal, but not for Rob Mullens

There can only be one major personality in the coaches’ room, and that is why Helfrich was a good fit for Chip Kelly and would be for Coach Cristobal as well. Helfrich is more laid-back and is comfortable out of the lime-light and in a supporting role. Yet, things ended badly between Helfrich and Athletic Director Rob Mullens, as the 8 million dollar buy-out did not sit well with the AD, and the treatment of the departing coaching staff by Mullens was objectionable to many, including Helfrich. Could this be patched up?

The “weird” factor for the athletes would be passed shortly as well; none of the players Helfrich coached in 2016 will be on the team in a year from now. While it would have been awkward this year for some, it would not be by the time Moorhead decides to move along.

That is an inaccurate narrative out there, as it assumes that the game-planning and decisions were primarily made by the head coach. Yet the reality is that innovative game plans and the use of old plays pulled from the book continued as Helfrich became the head coach and through his three years. The beginning of the evidence was in the Fiesta Bowl, and continued through a tremendous season in 2013. I believe Helfrich is simply brilliant as an offensive coordinator, and we have tons of proof right here at FishDuck. 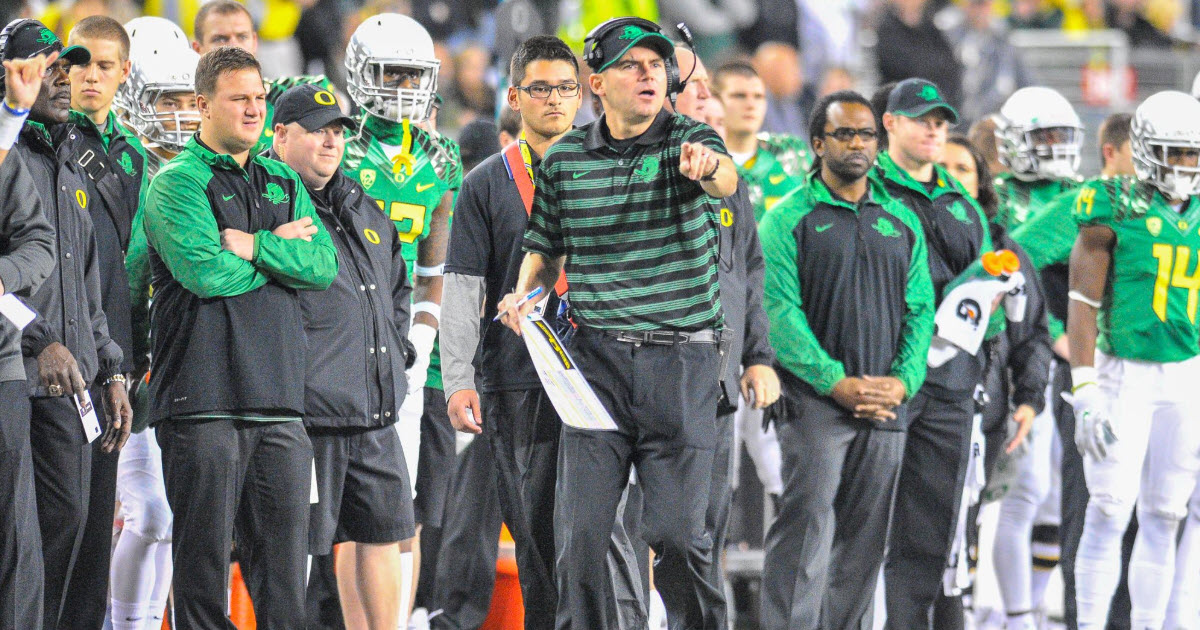 Few could direct an offense like Helfrich at Oregon or nationally.

In fact an analyst at FishDuck, Josh Schlichter, noted how he could tell the difference between when Mike Bellotti was calling plays when Chip was OC, versus when Coach Kelly made the calls. He stated it was also very evident when Helfrich was Chip’s OC — and when things became run-stagnant, it was evident that Coach Kelly was being stubborn again. Once the offense became more balanced, it was clear that Kelly had given way to Helfrich.

I have written quite a bit about the Helfrich game-plans over the years, as I loved how he would pull old plays out to surprise an opponent. These were not trick plays, and they were certainly in the playbook, but simply had not been used in quite a while. How can an opponent prepare for that? I challenge anyone to read the four analysis articles linked and not come away impressed with Helfrich’s preparation and execution of a game plan, and yet realize that it can return again with the new wrinkles added. Marcus Mariota and Mark Helfrich embrace before taking on the only team, (in the Pac-12 Championships) that beat them during the regular season. Helfrich was a superb QB coach.

Why Return to an Old, Dated Offense?

The original Oregon Spread Shotgun offense has proven to work at the highest levels and continues to. Ohio State head coach Ryan Day was a quarterback for Kelly at New Hampshire, and as a coach has used his offense to propel the Buckeyes into the Playoffs last year and most likely this season as well. Since Clemson adopted the original Oregon Spread Offense, the Tigers have a slew of BCS and National Playoff appearances and two National Championships as a new power in college football.

In my view, if Cristobal had carried out what he told us at the beginning of his HC career at Oregon of, “doing the same as before only being tougher in the trenches and matched with a great defense,” then the result of that would have the Ducks becoming a west-coast Clemson. This offense works, and it has only been used in part at Oregon under Cristobal. When it comes to the original Oregon offense … you can go home again!

Would you want Helfrich back someday as an OC?